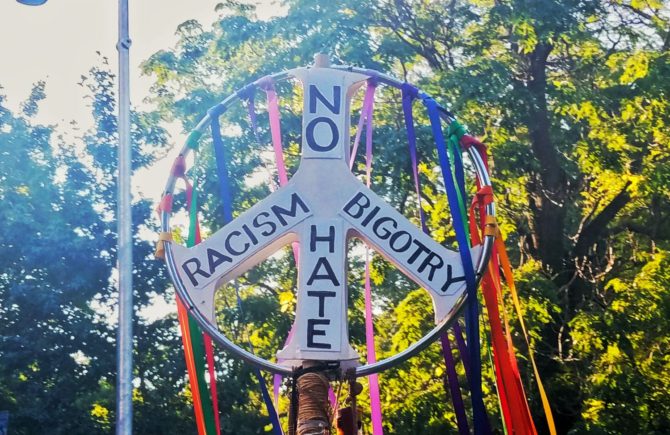 This post was originally made during the Charlottesville riots. Nothing has changed. Please use the information that was originally described as a reminder of what was only years ago, and has not changed. The photos we are seeing right now in the world at riots and protests are identical to the energy from then. The difference is that every state is participating. We are in a moment of history.

What side of history do you want to be a part of when this is in textbooks? Do you want to be an apathetic voice that hopes for the best, or do you want to know in your heart you fought like you swore you would have when you read about the Holocaust or the Civil Rights Movement? Take ACTION. Below is a list of resources for you to do so, and I hope you DO!

If you were paying attention and have a sensible head on your shoulders, you were outraged by the events that transpired at Charlottesville last week. We have that in common. We don’t need to make it about me or you or us and say, “I am outraged”. We know you’re upset. I’m glad you’re upset. You should be upset. This is out of control. It’s a call to action.

I hope you were also outraged by all the Cys, Arian white people who were sharing the viral meme that were making fun of the White Supremacist Nazis for carrying around tiki torches. The meme mentioned Taco Tuesdays and guacamole. Less than 24 hours after the largest congregation of hatred in our current time isn’t the time for people who will be unaffected by a White Supremacist genocide to sail past the major issues and share jokes about guacamole. It’s time for them to share their willingness to help. To out themselves as an ally. To provide the opportunity for those who are being marginalized and feel unsafe a place to stay, a person to vent to, to offer support. It’s the time to plan and attend rallies and protests, to use our privilege to create change from within the systems that have been created in front of us.

It’s not the time for white people to make jokes about how the Nazis chose to carry their fire. They may be idiots, but they are dangerous. And so is fire. And carrying torches, of any kind, is not a peaceful protest. Someone pointed out to me that it’s important to make fun of them to point out how silly and stupid they are. And also that the torches they’re carrying are derived from Polynesian culture and were not made in the USA. Those are great points. Unfortunately, the privileged people I saw sharing those memes were not making those points. They were just making jokes about guacamole. I’d also like to say for the record that those people who are waking up feeling unsafe are welcome to cope however they need to, and I recognize that humor is a necessary coping mechanism. It just felt like a hugely ignorant ‘fuck you’ to every non-white / non-Arian / non-Christian to share that meme and ignore what was actually going on — the fact that these White Supremacists who gathered in Charlottesville in 2017 are a step away from lynching. The main thing against them creating a genocide is the law against murder.

If you don’t acknowledge that Charlottesville was a terrorist act, you are racist and enabling the White Supremacists’ agenda. Racism, homophobia, misogyny, and xenophobia have gone way too far. It is now your responsibility to call every single person on their actions. To stand up for human rights.

Is Uncustomary a positive happy place? Yep. But we can’t have positivity when only some people wake up feeling safe. I saw a sign the other day that said, “If your feminism isn’t intersectional, then you’re not a feminist“, and I couldn’t agree more. It applies here, too. The movement you’re passionate about has to be all-inclusive, otherwise it’s discriminatory. That’s just a fact. If you can’t join in the fight to say HELL NO to bigotry of any kind, you’re not doing your part to create a positive environment and you’re taking advantage of privilege that has been created from an imbalance rooted in hatred.

Ever wondered how you would have been during the Civil Rights Movement? Here’s your chance. We are in it. Nazis murdered someone in broad daylight without penalty, three hours from my front door. If you were waiting for a sign, it’s fucking here.

Here are some Activism Resources that I will add to as I create them that you can refer to. Action is the only thing we can rely on right now.

Resources that I’m working on:

Please request resources you’d like to see me put together.

I understand that political posts ruffle feathers. I understand that people disagree with others and with me. I understand that you don’t come to Uncustomary to talk about current events. I think it’s important to have freedom to disagree with other people on things that are objective and don’t interfere with anyone else’s safety or freewill. Bigotry and discrimination threaten many people’s safety and freewill. And I can not disregard my blog as a platform to share resources and advocate for human rights, equality, safety, and ideally, peace. If this post makes you unfollow me, that’s fine. There’s lots of colorful bloggers on the internet who keep their mouths shut, but I’m not one of them.