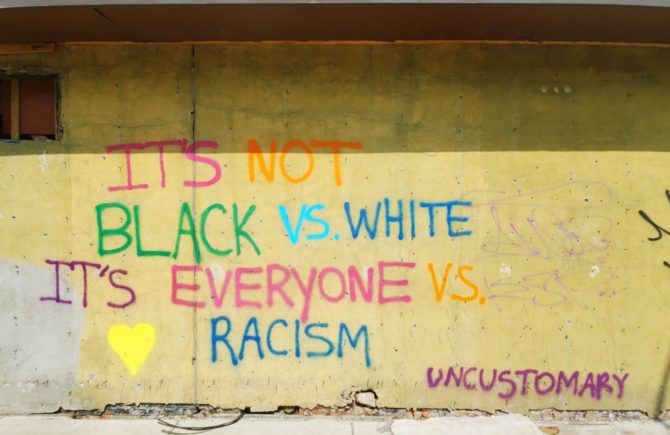 It’s Everyone Vs. Racism

Some people are under the impression that advocating that Black Lives Matter means that “All lives” don’t matter. It means that it’s now a war between White and Black. That being pro-Black means being anti-White. Let’s be real. There are an aggressive amount of racist people out there. I just deleted a comment from someone that said “Did you know that me voting for Trump and (insert a bunch of racist activity here) makes me a “white supremacist?”. On a recent Instagram post this morning two people must have been trolling BLM hashtags and came out of the woodwork to argue. One of them had a bunch of things that argued what “white supremacy” meant, and the other said “No *insert new moon face emoji here*” (trying to create Black face). I literally saw someone on Facebook ask, “Where is this place where we’re supposed to check our white privilege? Is there a coat check or something I don’t know about?”

That’s just three interactions with strangers. That’s not even families that agree that “white is better”. That’s not even large groups of politicians and lawmakers that refuse to acknowledge systemic racism and create legislation that protects Black people and POC. That’s not even racist officers who get away with murdering people for the color of their skin.

Breonna Taylor’s murderer’s have still not been arrested! Today, on Juneteenth, one of her murderer’s was fired. The Police Chief said that the officer, “displayed an extreme indifference to the value of human life” in a statement. YOU MEAN HE MURDERED HER?! Arrest him, don’t fire him! And the other two!

I saw this really powerful post today from a Black man named Malcolm Tee (it was a reposted screenshot, if anyone has his original Twitter, I’d love to credit him). He said that “we didn’t ask for this”. He listed all the ways that white people are responding to the riots and protests. By canceling cop shows, photoshoots of politicians in culturally appropriated ethnic garb, and all the streets to be painted in with “Defund The Police” and “Black Lives Matter”. The first and last of those examples are things that are done with good intention, but his point was that what we actually need is to “Pass some meaningful fucking legislation, hold departments accountable, hold murderers accountable, address systemic, sys-fucking-temic racism.”

He’s right. We can paint every street in America in solidarity, but until we actually create laws that protect people from getting killed and hold their killers (who are the people who make and enforce the laws) accountable, nothing can truly change. That said, I’m still going to keep creating art (like the piece I’m sharing today) in addition to educating myself and others, spreading information, creating resources, having uncomfortable conversations, and being active in politics as much as I can. You might have noticed protests have subsided from the news and even your most “woke” Instagrammer’s feeds. But this fight, that started when America started, is far from over. This isn’t Black Vs. White, it’s EVERYONE Vs. racism.

You can see how simple it is to make art in this video below. I’m not a trained fine artist. I just have multiple colors of spray paint and found a temporary/abandoned surface. See more on Guerrilla Art 101.