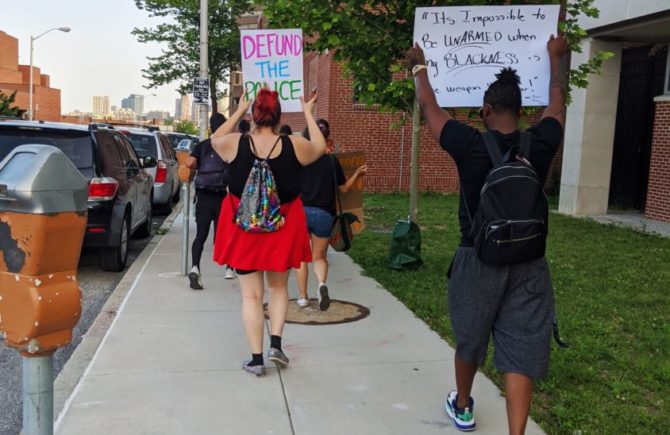 Protesting is an amazing form of activism. If you are able to protest, I highly recommend it. Not only does it really get you feeling exactly what you’re fighting for, but you are out there making a difference. This is the biggest protest movement in history, and between the protests, riots, and other forms of activism, we’ve gotten more done than we usually get done in a damn year. It’s still nowhere where we need to be, but it’s a start in the right direction.

If you’re attending a protest, you might want to consider making a sign. It’s a great way to share your message, especially if you can’t project your voice (and keep in mind that your voice will get hoarse from chanting/yelling). Also consider using both sides of your sign, so that someone can see your message (or two different ones) from no matter where they are in perspective to you. You can also make signs to put in your window, make a sign for someone who is going to be attending a protest, or use these sayings for other art. See 10 Alternatives For Activism For People With Anxiety.

I made a list of 50 general phrases that can be added to a sign. A lot of them are things I’ve seen on Instagram, at protests, heard being shared, etc. If something originated in someone’s mind and you’re the artist and want credit to your Instagram post or something, just let me know, but the general idea is to be a reference guide for people to be creative and active. Feel free to share with anyone who can use it along with these other Activism Resources.

There are also a couple extra categories at the bottom, including phrases specifically designed for Black people, signs that might be better used for children in protests (but might be good for anyone), and some signs that you might want to give your dog/pet for a photoshoot or if they’re marching with you.

1. Punk isn’t dead, but racism should be
2. It’s not Black vs. White, it’s everyone vs. racism
3. Defund the police
4. Black lives are… Beautiful, Important, Valuable
5. Fuck the system (but use protection)
6. Unity: As one, we all stand together
7. Black Lives Matter
8. Enough is enough
9. What are you doing today to dismantle racism?
10. No justice, no peace
11. Say her/his/their name(s)
12. United against hate
13. Fuck Trump
14. Sex is good, but have you ever fucked the system?
15. You’ve fucked with the last generation
16. Black Trans Lives Matter
17. Now is the time to be vocally anti-racist
18. No one should die in police custody
19. Invest in communities
20. We can do better
21. Racism is so American that when you protest is, people think you’re protesting America
22. More has to be done
23. Dismantle white supremacy every day
24. Send killer cops to jail
25. I can’t believe I’m still protesting this shit
26. Black lives matter more than white feelings
27. We understand that we can never understand
28. With privilege comes responsibility
29. Is America “great” yet?
30. So you’re just gonna use police brutality on protesters against police brutality at the police brutality protest?
31. Silence is not an option
32. Silence is violence
33. Use your privilege to end your privilege
34. You think it’s hard to breathe with a mask, try being Black in America
35. Racism is not only a Black issue
36. Black futures matter
37. Racism is the pandemic
38. All mothers were summoned when George Floyd called out for his Momma
39. Black babies matter; invest in community
40. If one of us is in chains, none of us is free
41. Judging a demonstration by its most violent participants but NOT judging a police force by its most violent cops is the language of the oppressor
42. Witches against racism
43. We are allies
44. Black lives are critical
45. Treat racism like COVID-19: – Assume you have it – Listen to experts about it – Don’t spread it – Be willing to change your life to end it
46. Karens against systemic racism/ I want to speak to the manager of systemic racism, please
47. If all lives matter then why aren’t you rallying with us
48. Pro Black is not Anti-White
49. If I hid Black Americans in my uterus, would their lives matter?
50. Racism kills