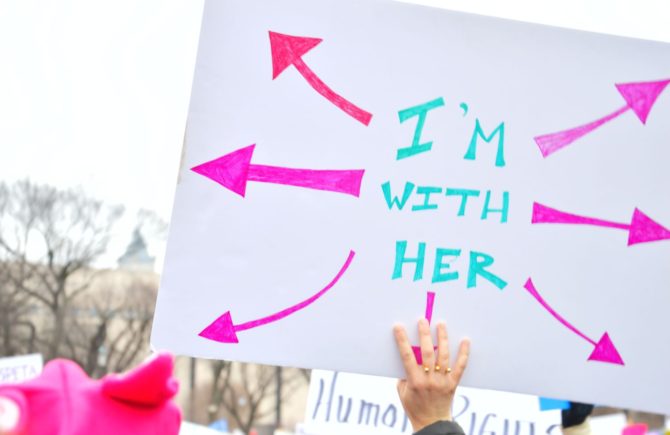 I’m so proud to say that I marched on Washington with thousands of people on January 21st, 2017. It was the collectively the largest protest EVER. Cities all over the world came together to protest, and guess what? Not ONE arrest!

On my way home, I was laying my exhausted head against the Metro car and a man who traveled from Massachusetts with his wife was talking to a police officer on the train asking him if he worked yesterday and what the difference was between that and today. The officer told him that yesterday was significantly less people but WAY worse. People were angry and picking fights, being violent. Today people were angry, but respectful. He said he’d take a thousand todays over yesterdays.

We know how to protest. The line for just getting ON the Metro was almost a mile long. Luckily, Jason had filled our Smart Trip cards the night before, so we got to hop the line. That didn’t mean the rest of the day we didn’t mimic sardines, though! If you weren’t shoulder to shoulder with someone in DC that Saturday, you probably were at home watching TV missing history. Everything moved at a snail’s pace. Almost frustratingly so. We’re all so angry and have so many things to say and we wanted to MARCH, damnit! But when there’s enough people to shut down all the cell towers so no one has service, you’re probably not going to be moving anywhere very quickly. We made it work, though. What easily got us through it (besides Maura’s very thoughtful pre-made snack bags) was the ENERGY. It was palpable.

It took us almost an hour to get from the train to the turnstile to exit the station with all the bodies on the escalator. If it was a regular day and I was just commuting to work and those were my circumstances I would have written that off as the worst day ever. But instead you had an entire corridor full of powerfully passionate bad ass babes whooping, chanting, and dancing with their signs raised proudly for all to see. When one person yelled, everyone yelled. It was this humongous sense of community that sent adrenaline running through your brain to your feet, and gave you the momentum to keep going — even if those feet of yours, like mine, are flat and hate standing in place because of the pressure. I was really happy with the reactions my sign got. One side said “We Will NOT Be Undone” in rainbow letters and the other side is pictured here, saying “Viva La Vulva”. I saw three other depictions of the same phrase, and I loved it. Long live, indeed. Once we finally got out onto the streets, we headed towards the rally, but things took so long that literally as we approached the stage, they were turning around to begin the march. Right on time! So we pivoted (PIVOT! PIVOT!) and joined the enormous crowd of people ready to protest. There were people of all ages, gender identities, sexual orientations, races. There was a sea of pink pussy hats everywhere you looked. There was a badass tween who climbed high up in a tree near the monument with a sign that said “NOT MY PRESIDENT” and screamed her heart out to the point that the crowd couldn’t help but fall in love with her. We started chanting, “That kid for president” and she didn’t think twice before joining in the chant herself. I’d vote for her. One of the most beautiful things I personally experienced was when the women chanting, “My Body, My Choice” slowly turned into a call and response with men. As they hollered, “My Body, My Choice!”, men would then respond with, “HER BODY, HER CHOICE!” It gives me goosebumps to even write about it. It was fucking beautiful. THAT IS WHAT WE NEED. Support. Support across genders. Across races. Across social classes. Just because something isn’t your problem doesn’t mean it isn’t A problem and it doesn’t mean you can’t march for it.

I heard someone get upset when a man was the one to start one of the chants, which I thought was absurd. If anything, you should be HAPPY that that man got up and came to deal with these crowds to fight for your rights. The things he’s protesting for he already has. He’s marching for you. He’s allowed to start a fucking chant. We’re in this together. It sickens me that the first official thing Trump did as president was anti-woman. He signed that god damn bill in a room surrounded by white men who don’t give a damn about our bodies or our decisions. THAT is why we marched. That is why 2.6 million people got out of their beds, put on pink hats, wrote on posters, got on buses, and took anxiety medication to deal with crowds because FUCK YOU TRUMP. The entire experience was really exhausting to be totally honest. I mentioned the whole flat feet thing, plus I have scoliosis, so standing still (which is basically what we were doing for hours and hours and hours with small baby steps) for significant periods of time is really hard on my body. I didn’t make it all the way to the White House, but I didn’t beat myself up about it. I walked by myself up 14th Street to Constitution Avenue and watched as a Pro-Trump float crawled its way through a sea of protesters. No one was happy at this ballsy move, but they were respectful. The only thing that happened? Someone threw an empty cup vaguely in the general direction of the float. That’s not bad. I can’t say that’s how things would have gone had things been reversed (see: when Obama was elected and people were burning silhouettes of him in their front yards). I was proud of us. The signs were amazing. They were hilarious, witty, intelligent, colorful, and fucking beautiful. I wish I could have taken a picture of all the ones I saw that meant something to me, but sometimes signs block other signs. And sometimes you have to eat cheese sticks to stay alive. As I finally found my way to the Metro station to make my way home, I found that people were leaving their signs in an installation/graveyard of sorts. It was beautiful and strange. I hope someone took some of them for a museum because this day was historic and important. When I told Laura about the sign graveyard she said, “You didn’t put yours in there, did you?” and I told her of course not. That shit is my ticket stub from an awesome event. When I got home, sixteen hours after I left, I sleepily stood on top of my bed and taped my sign to the wall near the balloons above my bed. I apologize for the shakeyness of the video, but if you want to get a glimpse of what the march was like from my perspective, have a view of the footage I took!