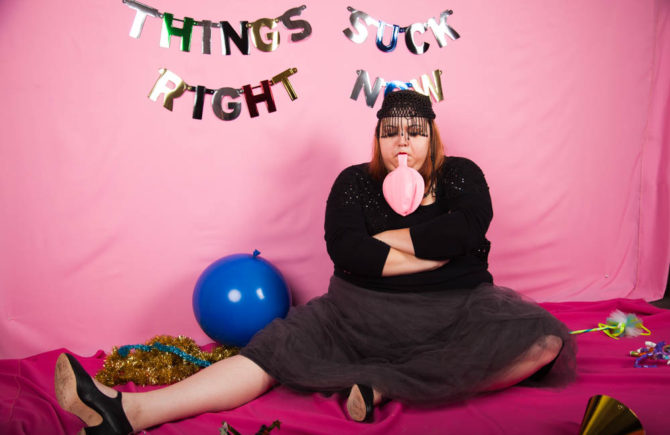 When Trump got elected, I sent out a newsletter that simply said I thought it would be a good idea for us to start spreading more kindness and love in light of recent events and I lost a TON of followers and received a lot of angry e-mails saying I was being too political and that’s not why they come to Uncustomary. That’s part of why I made it an important part of my end-of-the-year reader survey to ask you babes what you think about talking about real issues on here. Those of you who took the time to respond almost unanimously said you’d rather hear my voice and not just fluff, so guess what? Now I’m saying even more. When Trump got elected I had a panic attack and sobbed uncontrollably. The living room I was in was quite literally like the one in this SNL sketch. When I saw that sketch I laughed till I cried then I just started crying. It simultaneously makes me furious and depressed that this country elected a racist, misogynistic, xenophobic asshole with no experience and that I also didn’t see it coming. I wasn’t prepared. I let my optimism paralyze me. I never once, in my bones, believed he would be elected. Never once. So I didn’t do enough to stop it. Could I have stopped it alone? Probably not. But there were thousands of people like me, who thought like me, who could have worked together. And together we maybe could have stopped it.

Today what we didn’t stop is trudging forward. He’s being sworn into the White House as our leader for the next four years. Today people are weeping openly, thinking about hurting themselves, and calling suicide hotlines. (I was with someone who worked for a suicide hotline the night of the election and her phone blew UP while we were watching the results pour in. And that was before it was even official.) People don’t feel safe. Other people feel that with this man as their symbolic leader, their personal views of racism, misogyny, and homophobia, etc. are rooted in something greater and will continue to discriminate against their fellow man on a micro level. Today my plan is to ping pong radically through the stages of grief. (I’m currently in depression, and I have a feeling I’m going to go back to denial really soon.)

Tomorrow my plan is to march among thousands of people in our nation’s capital, letting Washington know that our rights as women will not be taken away. Our rights are human rights. You can’t tell me what to do with my reproductive system. You can’t put me in jail as a murderer for having an abortion. You can’t deny me birth control. You can’t take away the rights people have fought and suffered for over the past century and more to get. We will not be silenced.

The day after tomorrow, my plan is to plan as much as I can. That includes acts of merriment, acts of kindness, and acts of protest. I will create happiness wherever I can on micro and macro levels. I will attend more marches for people who feel marginalized and threatened by this administration. I will stand with you if you are scared. I will stand up for you if you are being torn down.

That’s as much as I have figured out right now. And maybe that’s all I can.

Things suck right now. They just do. And I can’t put a band-aid on it for you. I wish I could. I found this really great article of things you can do during the inauguration and the day after (and really in general) if you’re afraid of Trump’s presidency. There’s some really good advice in there. I highly advise you to check it out.

Please let me know if there’s anything I can do for you. I know you might feel helpless. It’s easy to. But you’re not powerless. You have some control, and it’s up to you to use it.