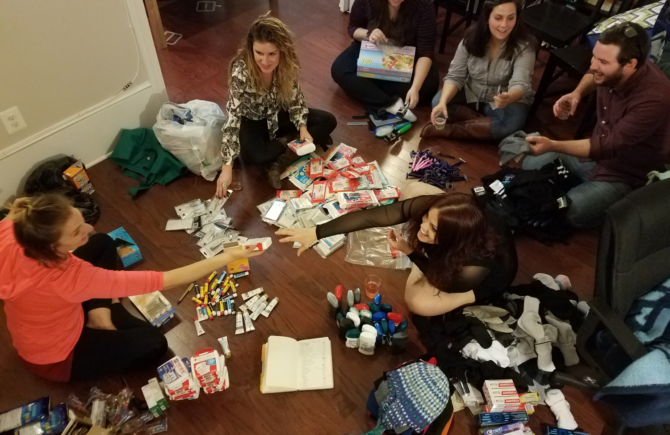 How To Make Packages For The Homeless After Trump was elected president, my friends, Ashley, Bryan, and Skye were moved to organize a drive for the homeless. They had a really great turnout and were really thorough with what they wanted to collect and I thought it was was a really great example of organizing an event for activism, so I wanted to share! They made a Facebook event which they shared all over their friends pages, and orchestrated local drop-off days at cafe’s and public places for people to come deliver supplies. This was a really great idea that allowed people to feel personally involved, even if they couldn’t come to the packing party or the actual delivery day. They collected a TON of stuff, and it was amazing to see the generosity of people from all over. The organizers were very clear about what they wanted to collect, and even had an Amazon wishlist with the amounts of things left to purchase, so it was easy to see what was left to get. The idea was to create thirty packages that all had the same supplies inside them which they could deliver to people in person on the street. They held a packing party, where a bunch of people came to organize and stuff the giant zip lock baggies full of things from hats, gloves, toothpaste, first aid kits, lip balm, razors, deodorant, socks, snacks, tampons, and more. See below for a downloadable list of 60 things you can stuff packages for the homeless with! They even had almost thirty coats donated that they were able to deliver to people in person. Here’s Ashley, hugging all the finished bags, which were delivered soon after. She said it was a great experience to deliver the bags in person, and she was so grateful for all the help she received. You can organize something like this in your hometown very easily. With helping hands, it just takes a little organization, scheduling, and budgeting to make this type of thing come together. Thanks to Ashley, Bryan, Skye, and all the people who donated and volunteered to make this event happen in Baltimore.