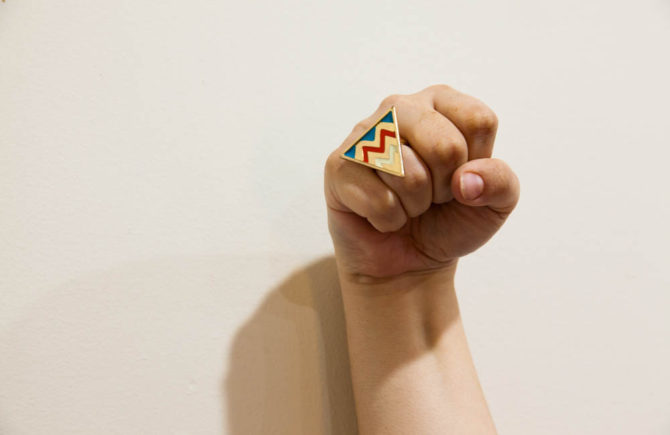 It’s easy to feel helpless right now. Two weeks into Trump officially stepping into office as the president, and we’ve already seen some drastic and upsetting laws go into place that are just the things we were worried about happening. We’re scared for ourselves, we’re scared for our families, we’re scared for people we’ve never met, we’re scared for the world. You’re right to be scared. This shit is scary. But that doesn’t mean we need to cower. We have to push through the fear and fight. Here’s a list of ways you can use activism to fight during Trump’s presidency. 1. Sign up for notifications every ten days from Women’s March – They’ve got a plan of action every ten days for the first one hundred days after inauguration. The first one was to write postcards to your senator about something that’s important to you. In this vein, you can also host events related to the plans of action they suggest, like a Postcard Writing Party that Maura and I put together with kits to write postcards, supplies, favors, food, prompts for conversation, informational flyers, etc.

2. Make a playlist of songs to protest to, or listen to the one I made for you

3. Call your senators – There’s likely an automated system you can click through and ways you can just click buttons to vote for certain things, but you can also leave messages. Leave a message! Tell your friends to call, too. (Here’s a link for reference)

4. Make stickers about political issues that are important to you and post them around your neighborhood – you can print out images you create or find online and turn them into stickers with a sticker maker you can find at a local craft store like this one

5. March! – RSVP to marches on Facebook for issues that are important to you, like the March For Science, March For The Arts, March For Planned Parenthood, etc. I know I live near DC, so I have an advantage to be near the White House, but there are definitely going to be regional marches, the same way there were regional ones for the Women’s March. Keep your eyes open on Facebook!

7. Support credible journalism – We need to know what the hell is going on, and we need REAL news right now more than ever; donate to places like The Washington Post, The NY Times, and NPR to keep the authentic current events pouring in

8. Get reading, get educated! – 27 books on intersectionalism and racial justice and a list of books on How To Stop Trump. Start a book club to hold yourself accountable!

9. Make colorful, witty, educational, beautiful signs! All you need is posterboard (usually under a dollar at the dollar store or craft store and some writing utensils) – Take them to marches and/or hang them in your window where they can be read

10. Stand up for people who are being discriminated against and marginalized – If you see someone being bullied or not being served in a public space, use your voice. You might not change the mind of the oppressors, but to be silent in the presence of oppression is to take the side of the oppressor.

11. Look for the helpers, be a helper, share the stories of the helpers on social media – We need to know there’s good people out there shouting and taking action, so take the time to hit “share” on the good stuff, too.

12. Also share the important news that can make you feel sick to your stomach. Most people only get their news from social media at this point, and they might not find out about that issue if you didn’t share it. Please know the more followers/friends you have on social media, the more of a responsibility you have to use your voice.

13. Have a conversation with a Congressional staffer. (link)

14. Get kids involved in the conversation. Utilize any and all resources available to you if you’re a teacher to use your platform to educate children on what’s going on and let them know this shit starts at a micro level EARLY. Here’s a resource for you to use for activities in the classroom from interactive activities to poster making.

15. Make signs that say “This Is Not Normal” and post them on your front door, or even make them the cover photo of your Facebook wall. The idea is that you’re acknowledging what is happening is NOT okay, and you’re NOT okay with it.

16. Make donations to organizations who are going to be really important in helping us get through this administration – Ex: Planned Parenthood, International Refugee Assistance Project, ACLU, NAACP, National Coalition Against Domestic Violence, etc.

17. Listen and watch really important, inspirational, and historical pieces of history like the “I Have A Dream” speech, or the recordings of the rally at the Women’s March.

18. Check out this list of actionable steps that’s already been listed out for you!

20. Hang signs or stick bumper stickers on your car or bicycle to spread knowledge and let people know where you stand!

21. Use hashtags like crazy, and don’t just share your voice, search for the hashtags too! Start conversations with people, learn new information, spread information. Get informed, stay informed, join together.

22. Keep abreast of the current news (while keeping your own well-being and sanity in check), but for glitter’s sake don’t follow Trump on Twitter.

23. Find your local SURJ (Show Up For Racial Justice) group!

24. If you need a break from seeing Trump, this Chrome extension will turn Trump into kittens.

25. Put together supply packages for the homeless, and even have a donation drive and packing party (see more)

26. Watch a shit ton of “Parks And Recreation” to remind yourself that there are bureaucrats out there who really do give a crap about what happens to the citizens of the world.

27. Find resources and contacts in your state.

28. Download the app “Countable” – It tells you about your representatives, how to contact them, bills their pushing through Congress, and other topics currently under way. Writing is great but calls are better. Senate / House Of Representatives

29. Run for office – even a local election. Consider being able to affect change with your own hands and be the decider of what happens, at least on a smaller level that can pave the way for bigger and better things.

30. Start NOW to start protests and plans for gaining back control of Congress in the 2018 elections. Mark November 6, 2018 on your calendars.

32. Don’t forget all the work we have to do with racial injustice. Check out your resources for white people standing up for the Black Lives Matter movement.

33. Delete Uber, use Lyft instead.

34. Keep your sense of humor about you and follow fake news sources like The Onion to make fun of the things that are happening, because even though this is extremely serious and detrimental, we aren’t going to get through it with all work and no play. (That said, there are still people on your Facebook friends list who don’t know that The Onion is a fake news source, so beware when sharing.)

36. Educate yourself on what the process for impeaching the president of the United States is.

37. Write “Resist” everywhere you can. On your arm, on papers you stick in your windows, on your notebooks, on bumper stickers. Remind people it’s okay to resist laws when they’re unjust and not protecting the people.

38. Don’t stay at Trump-owned businesses such as hotels. Better yet, shop against him.

39. Educate yourself on the people Trump as elected to run with him – Not just Pence, but his cabinet, secretary, etc. Learn about their pasts, what they stand for, and any potential dangers they could have.

40. Sign up for a newsletter of four acts of resistance a week – Wall-Of-Us

41. Make street art about resistance and the political topics that are important to you for the whole world to see.

42. Educate yourself on what The Electoral College is and why we need to get rid of it – then tell your state legislatures it’s time!

43. Support your friends – This is a time where we are all really feeling anxious, exhausted, sad and crazy. If someone needs you, spend time with them or ask them what they need. Use your intuition to see what they might need. Also ask for what you need if someone asks you.

44. Remind yourself that there will be an end to the madness, even if it feels like it’s forever away.

45. Learn how to have conversations with people who will have radically different views from you, and know it’s important to educate rather than argue. Don’t expect to change their mind with one conversation, just try to provide facts and figures in a rational (non-emotional/non-confrontational) way. That doesn’t mean it’s not okay to insert some personal experience that directly relates to the issue at hand, though! Sometimes that’s the thing that actually strikes a chord with people.

46. Wear red, white, and blue – just because you don’t support what’s currently going on doesn’t mean you don’t support your country or want to fight for it! You can be a patriot and resist the government at the same time.

47. Take a few minutes to stay as a bystander when something iffy looks like it’s about to go down with an arrest. You’re allowed to film with your camera for documentation. Be the mediation tool.

50. Take care of YOURSELF. There needs to be a balance between self-care and activism. The state of the world as it is quite frankly draining and depressing, and to add on top of that you fighting the power with everything you have and then some… you’re going to run yourself into the ground with ease. Make sure you’re taking the time to recharge as OFTEN as you can. We need you fighting, but we also need you physically, mentally, and emotionally healthy.

Thanks to Charlotte Hager for putting together lots of helpful information for this post!

How else can we get active with activism?