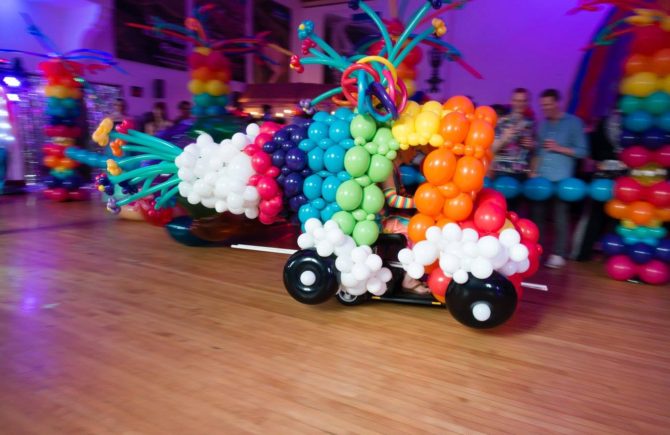 I met April out of sheer luck at a time in my life when I was saying yes to absolutely everything. I had no idea how lucky I was when I first met her that day in her newly-moved-in house, as I yarnbombed the handrails of her basement stairs because she wanted people to turn that room into something resembling an alley full of street art. She invited me to a party she threw a few weeks later and I was pretty timid. I didn’t know anyone, and I was the youngest person there by a long shot. I Irish-goodbyed pretty early on, and was met with a message from her the next day saying she was bummed I left early because she had rigged the ceiling above where the live band was playing with confetti and she thought I’d enjoy it. I wanted to kick myself because it was on my bucket list to have confetti rain down on me from the ceiling, and I definitely never expected for something like that to happen in someone’s HOUSE. Holy crap, she made that happen herself? Who was this girl?

Despite my lack of goodbye, something inspired her to continue inviting me to her parties (which I now know if a true honor because this babe doesn’t party lightly). The next party was a Christmas party where I still didn’t know anyone, but I was determined to stay despite any awkwardness because I was NOT missing anything awesome. And holy shit am I glad I stayed. That was the night a Santa stripped and humped me and she revealed she had turned her basement into an adult-sized ball pit. I was convinced she wasn’t real. She was some kind of elaborate prank or mirage that was going to evaporate as soon as I blinked too hard.

Slowly, I got to know her little by little and everything I found out I loved. Maybe that’s because we’re the same person in an alarming amount of ways, but in the areas where we’re different we’re strikingly different and I love those parts of her, too. I’m obsessed with the fact that she exists, basically. I used to joke she was who I wanted to be when I grew up until I found out she was legitimately more than a decade older than me (which I still don’t believe — I insist she just wants a senior discount early), and now I can more sincerely say her life is a tangible goal. She’s lived in another country just because, she’s lived in Vegas with her husband where he played professional poker and she was a showgirl. Like, that’s just what they did for a few years. She has an Elvis impersonator on speed dial, can spin fire, walk on stilts, twist a seven-foot balloon sculpture that you can stand inside of and move around in, face paint, decorate a house, make costumes, keep a baby alive, rock corduroy, and plan the most amazing parties you didn’t even know could exist.

She’s the person who told me I was living the life of a burner before I knew what a burner was. She’s the person who never says no to my ideas. She’s the person who never lacks anything except the time to fulfill all her creative desires because she’s full of them. She has plenty of convictions of her own, but never judges you for the life you lead. I regret not knowing her sooner, and I deal with that regret by carrying a key chain (the only one on my key ring) around that says “I attended April and Sean’s wedding June 3, 2000” even though I was twelve and definitely not in attendance. She started planning her 40th birthday party (again, I’m pretty sure she’s like 29 but whatever) a year ago or something. I thought even for her that was a bit aggressive, but after attending the party I never wanted to leave, I understand why she started so early. To start off, as you walked into the hall she rented, the entire hallway/ceiling was filled with a gigantic dangling balloon installation that you could walk through and made for a great backdrop for selfies. Everything was rainbow, from the napkins to the cupcakes. There was free booze and bartenders to serve you. She sectioned off a roller rink and stuck giant cut outs of her face on sticks in the roller skates you could borrow. There was a giant adult bouncy castle, a performer on stilts, two live bands, giant balloon installations on pillars, hula hoops, props to wear, a teddy bear mascot, an Elvis impersonator, a live Family Feud game, wrestlers… April even totally covered a golf cart type thing in balloons that you could actually drive around the roller rink. That was my favorite part of the party, hands down. April definitely lets herself have fun at her parties, but the reality is when you’re hosting you’re hosting. You’re in charge. We’re usually at her house, so there’s this automatic level of responsibility that’s put in the back of your brain. It’s almost impossible to completely let your hair down because you’re the hostess (and she’s definitely got the mostess). But when we were at the hall she had rented, at the party she had planned her ass off for, she let loose for real. I watched her go full April in that cart and zoom around. It was just pure joy on her face as she vroomed around in this beautiful rainbow creation she made. The pay off was glorious, and I would have been one-hundred percent satisfied if that’s all the party was. But it was so much more than that. Like, did I mention that all of a sudden a gospel choir from New York just walked in and started singing on stage? Yeah. That fucking happened. Also, a couple months before her party, a group of us got together to film a video. That was the other thing she wanted for turning “40”: to recreate a music video from each decade she’s been alive. We filmed in my kitchen, my basement, and a bunch of places nearby my house. I broke my five-year streak of not wearing pants for her! To be fair, they were from the thrift store, on backwards, and unzipped, but I still wore them. It’s a pretty glorious video (and professionally filmed, too) and I strongly recommend checking it out. They even used the footage of the take where I totally screw up AND you can spot me in a mirror where you totally shouldn’t be able to. Can you spot it?!

The video debuted at the party and was on a permanent loop for the duration of the celebration. It was SO fun to watch it with the people involved and to watch people see it for the first time. The hall was rented, so it wasn’t like a house party that can kind of just teeter out as people get tired. We were on a schedule. We made sure to get in some fire spinning across the street before things were supposed to turn back into pumpkins at eleven, but I really wasn’t prepared for what would happen at eleven. The lights came on and all of a sudden the balloons started popping. I basically started having a panic attack in that same second. I just looked at Joe in sheer horror and he said, “I’ll get some trash bags”, because he knew what my look was for. I was so sad that April had done all this hard work to make this place look so beautiful, to create such a fantastic party for all these people and then as soon as the lights come on everyone just started destroying the art. I know the intention was to help clean up. I know you can’t take the balloons with you. I know that place was huge and it was way too much for April to clean on her own. I know impermanence is beautiful; it’s what I base most of my guerrilla art on. I think the idea that you can only catch something fantastic for a second of being in the right place at the right time is a really great lesson to pay attention to what’s around us. But it just hit me all at once that these perfectly good installations weren’t going to be appreciated past this second. I had to save at least one of them. So I did. I shoved a pillar of balloons into three garbage bags and Joe put them in my car as I crawled under what remained of the installation that was attached to the golf cart earlier that evening.

I stayed there while everyone cleaned and scattered until I answered Joe’s “Marco/Polo”. He and April found me crying under the balloons because I didn’t want to go. I wasn’t ready to give up that party. I didn’t want it to end. I didn’t want such a beautiful effort to disappear so fast. I didn’t want all the positivity to be so easily erased. The next day, I took the garbage bags to a pole on the street and reinstalled them. It made me feel better that I was trying to prolong the celebration, even if it was just a little bit.

You should also check out the professional video that was taken of the party; I think it gives a pretty good feel of what the party was like.

And you can check out some of the previous things I’ve done with/because of April like: