This Spring, April and I did an installation in Mount Vernon to honor her brother, Danny Dean, who took his own life at the beginning of this year. On Tuesday, he would have turned 48, and April wanted to do something for him. He was always a fan of her balloon art, so we stuck with that theme. 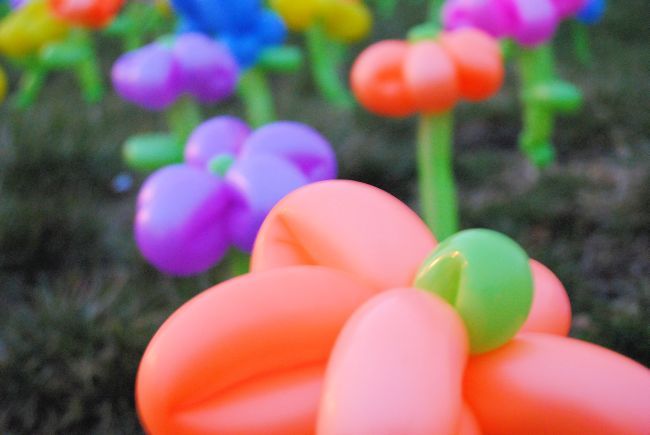 Fortunately, this time I was able to actually help twist the balloons, which is why I’m now able to cross of something from my bucket list! We made over 400 balloon flowers, which was about three times as much work as the dogs we made before. It took two days to twist them all, and my fingers  are completely raw from tying the balloons. We had help from April’s amazing husband, Sean, and one night their friend, Mara, came by for a bit to pitch in. 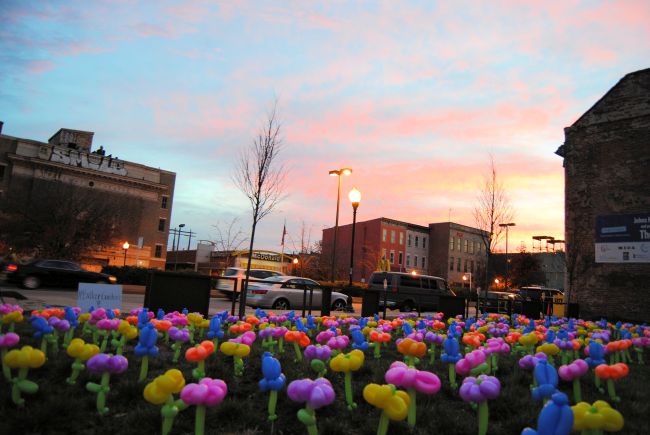 We selected the Ynot Lot in Station North, which is a nice patch of grass on a corner. Ben Stone is doing such a great job to turn Station North into a beautiful, artistic, and fun neighborhood and the Ynot Lot is a big part of that movement. In the Summer, I went to block parties where there were performances on the stage in the lot. It’s a great place to have vendors, dance your butt off, and do a giant balloon art installation! 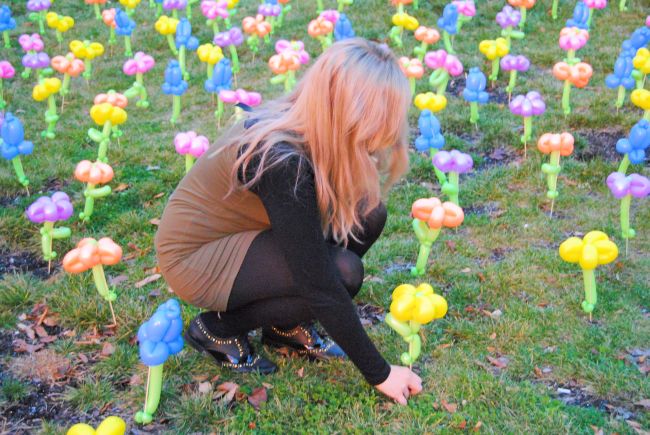 It was actually really cool because Ben happened to be walking by during our (three-hour-long!) installation, and he took photos to post. I’m glad he liked the idea! It was a cool way to utilize the space in the colder months, even if it’s just for a couple days. 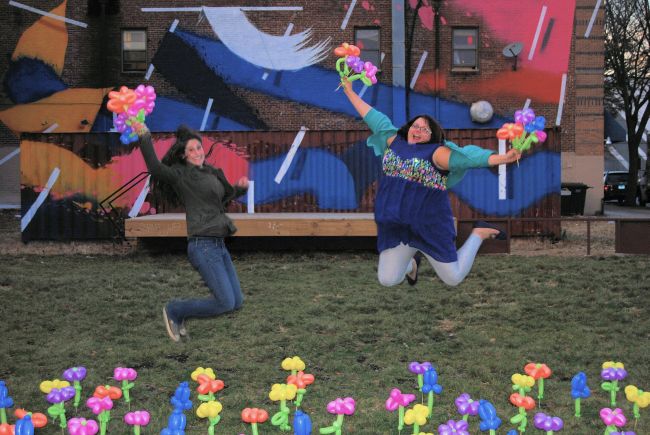 Like last time, we had tons of bags full of finished balloons that we had to tie sticks to in April’s trunk before we could put them in the ground. The difference this round was that we had some help! The adding of the sticks was a little trick, so April and I handled that part, but we had extra runners from the Volvo to the lot, and we can thank Cristen, Susan, and her son, Linus, for that. We were there till sundown, but it would have taken even longer without their helpful hands! 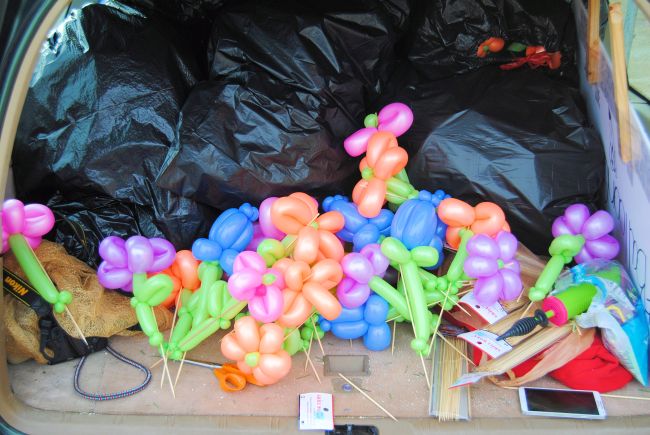 Unfortunately, the hashtag wasn’t much of a success this time. We had a much larger sign, yet no one stopped to look at it. I actually had to explain what we were doing verbally more times than before, which was weird since it was written out. One girl did post a picture of them in the snow the other day, which was mystically gorgeous. 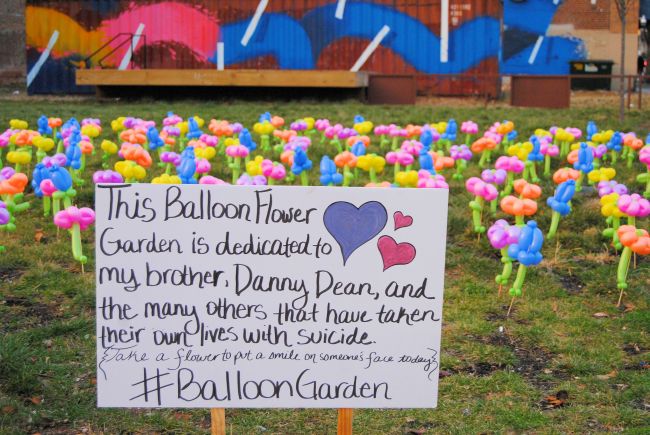 We’ll go back to make sure they’re all gone, but I really do hope that people are stopping by to take one for themselves and a loved one, as the sign indicates they can. Great losses like death, especially suicide, make people like April and I realize how important it is to create happiness for ourselves and others as often as possible. This is our gift to everyone in honor of everyone we have lost to suicide. It’s a little bit of color and a whole lot of love. 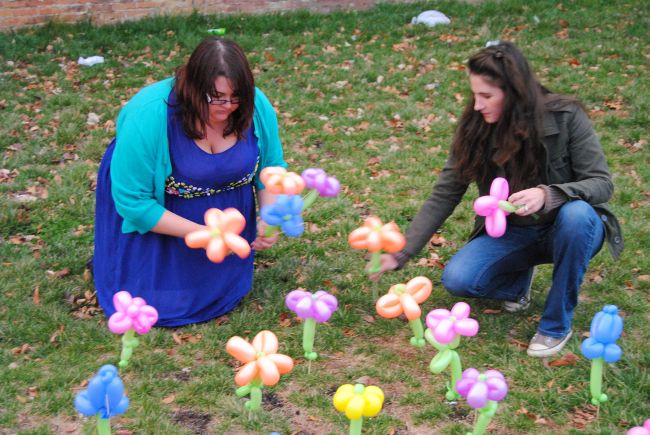 Thanks to Sean for helping us twist, being the comic relief, forcing us to watch weird movies while we worked, and cleaning out the car. Thanks to Susan and Linus for taking time out to come help with the installation and bringing pizza. Thanks to Ben for being cool with us using the lot, and generally creating an environment that promotes creativity. Thanks to Cristen for being a huge help with the install, explaining what we were doing to strangers, and helping with taking photographs. And finally, thanks to April for being the most talented person I know, coming up with this gorgeous idea, funding it, and doing the majority of the work. Thank you for the joy you add to this world. 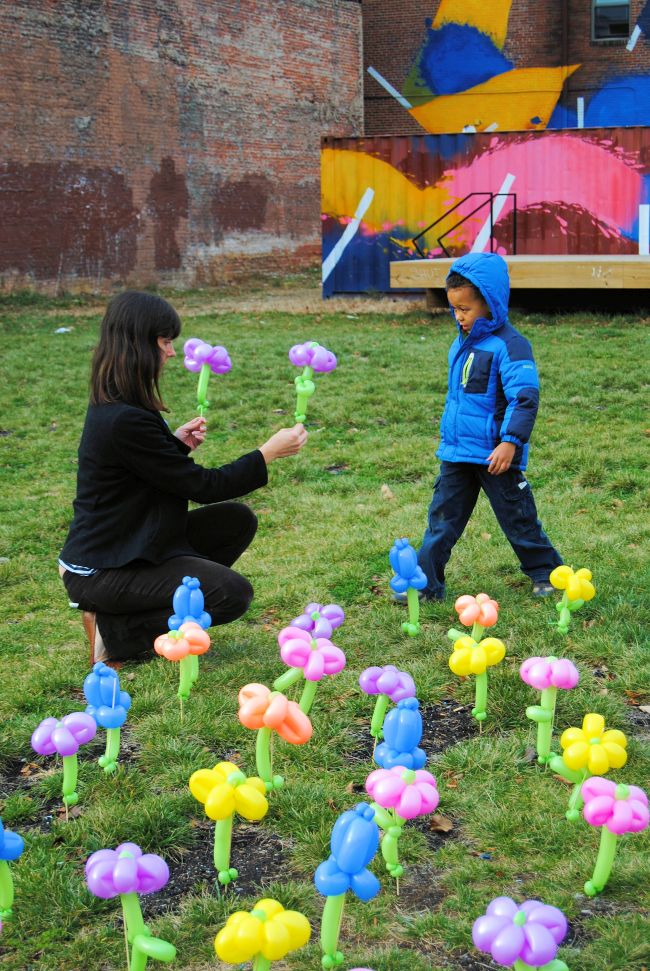 I took a little video footage, and it’s kind of cool to see the time lapse, if you’re interested. 🙂 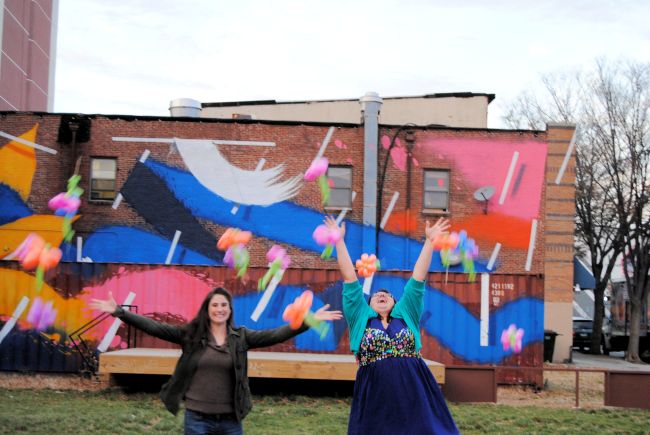 If you’re from Baltimore and you saw the installation, I would love to know what you think and/or if you took a balloon! We love you.