You may remember me describing the best party ever back in December, where I got to swim in a ball pit, have black light bubbles land on my skin, and get humped by a stripper dressed as Santa. You may also remember the fantastic balloon garden I helped install. What these things have in common is that they were touched by the magical hands of my friend, April.

I refuse to miss any party she throws, but I was extra excited when I found out that she would be recreating an episode of Jimmy Fallon’s late night show for her birthday. I knew it was going to be great, but, as always, I didn’t know how great. 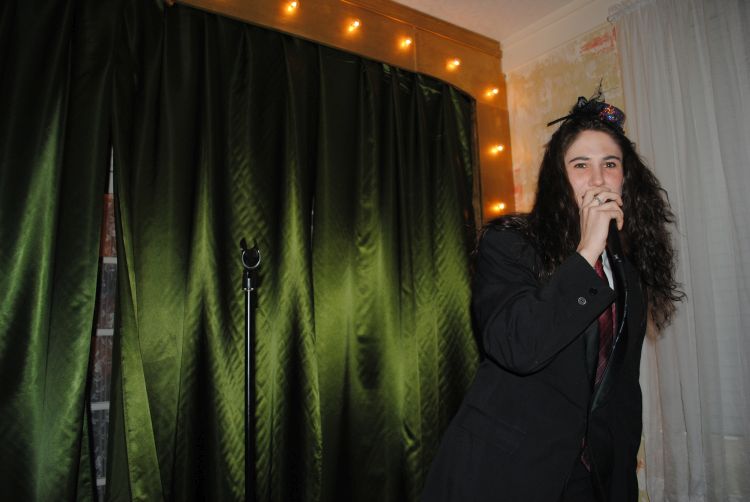 Obviously, April dressed up as Jimmy. She even wore the little sequined top hat I got her! She did a fun and silly monologue, where she mentioned some of the ridiculous laws we have on the books for Baltimore City. One of them is that we’re not allowed to curse within city limits, and when she let an “F” bomb slip, the police came to take her away. She’s not going easy, though. 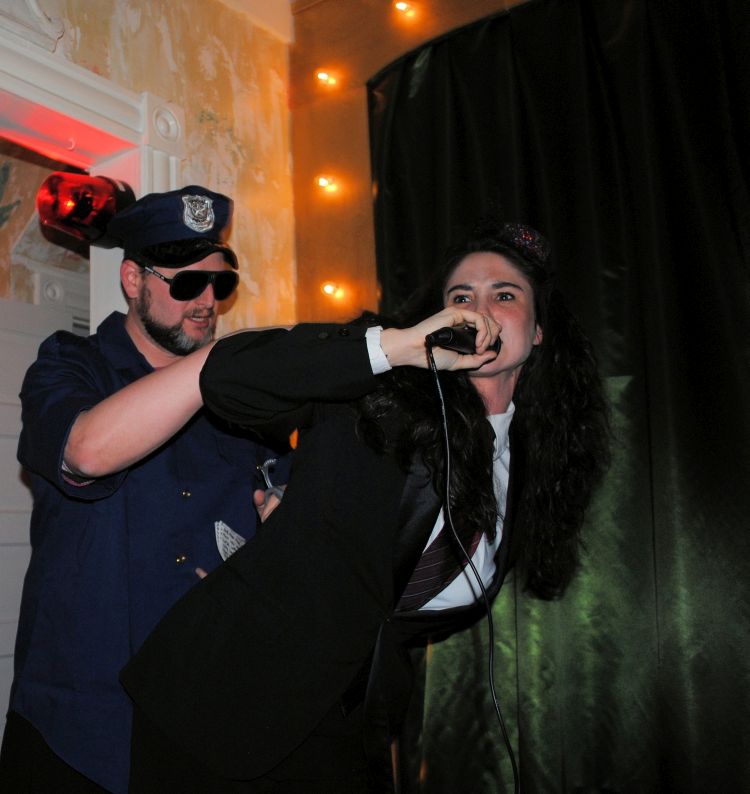 And we’ve only just begun! April and her husband, Sean, recreated the Jimmy and Will Ferrell bit called “Tight Pants“. 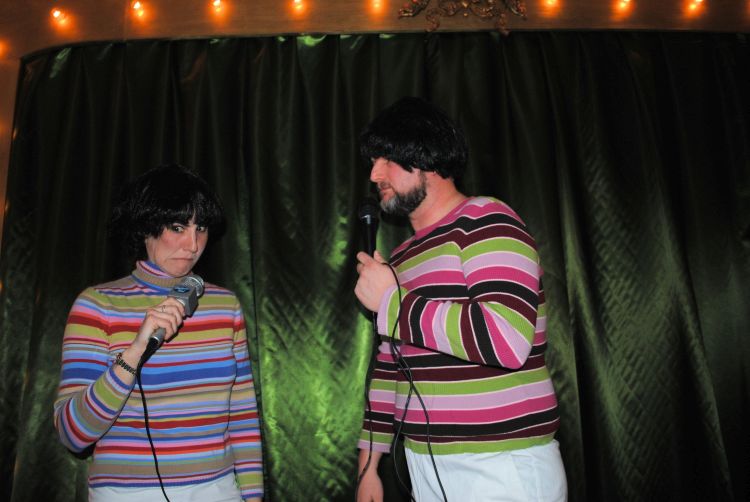 Weeks ago, April had asked if I would come up with some fake dance names. It was the best part of my day. So I was really excited when she called three audience members up to draw slips of paper from a bag with fake dance moves on them. Two of mine got drawn: “Magic Hitler” and “Twirly Harlot”. The winning dance was “Drop It Like It’s AIDS”, as interpreted by Eric. 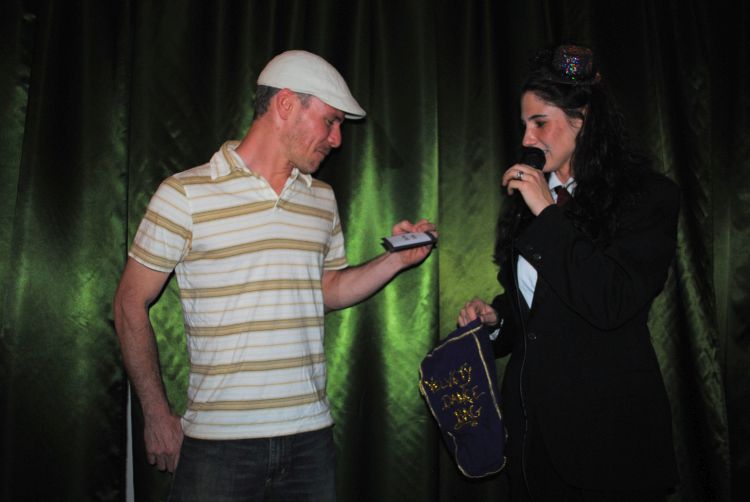 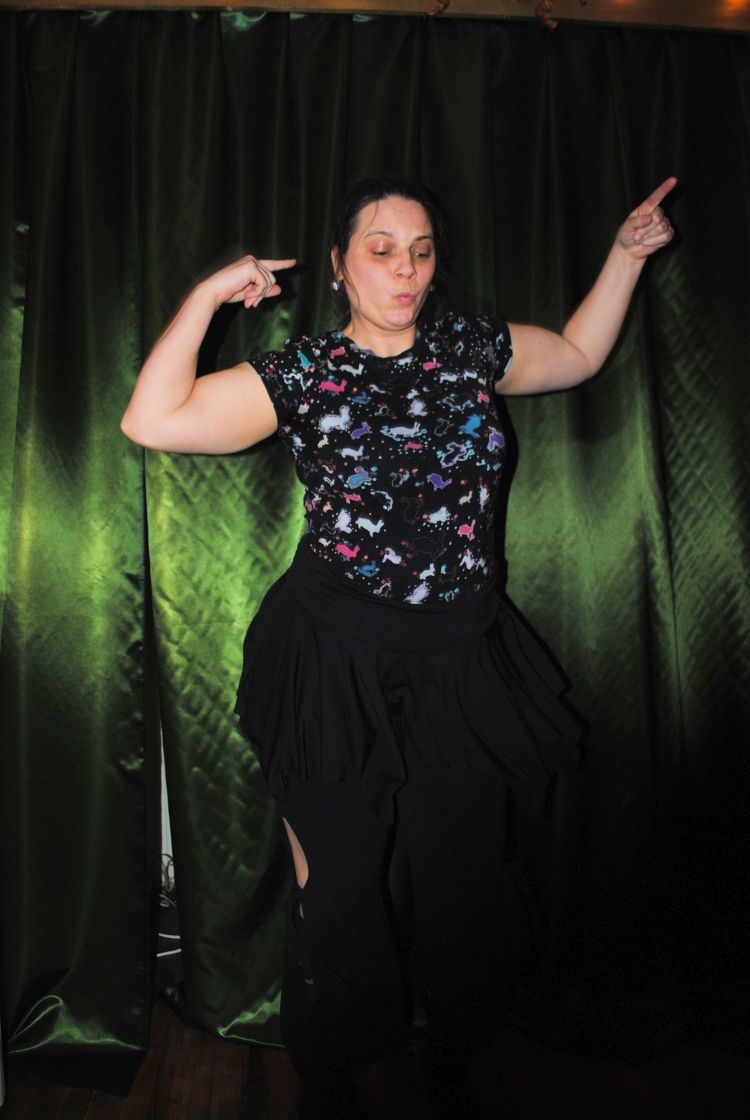 For the first guest, Dustin of Painted You, Creative Entertainment appeared. He seriously brought a live four-foot alligator and a giant python. I touched them both! I had never touched those kinds of animals, and I was so surprised that the snake wasn’t slimy. So cool! Everyone was surprised, excited, and freaked out in a great way. He walked around so everyone could get a turn to touch his reptilian friends. 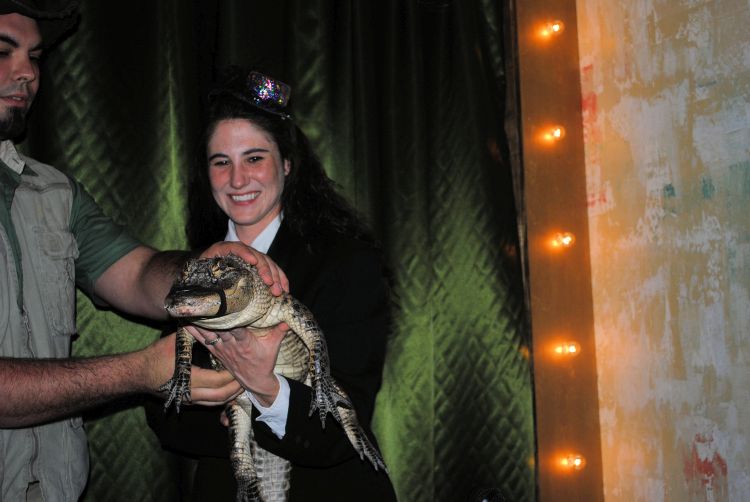 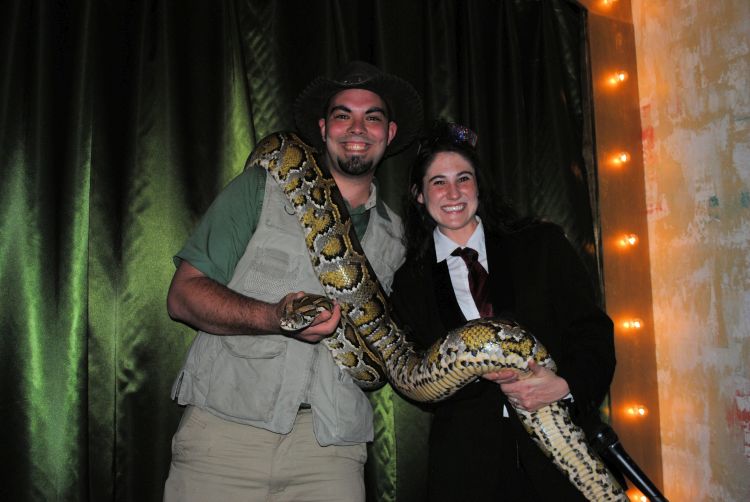 There were plenty of games that involved audience members. First, Maryanna and Kip played Box Of Lies, and later Maryanna and Odell played Water War, which ended with a giant super soaker gun. Bardia and Troy played Egg Roulette by smashing eggs on their heads (without knowing if they would be hard or raw), and I got to have April pour pink and green dyes on my head for the Let Us Play With Your Look portion of the evening. 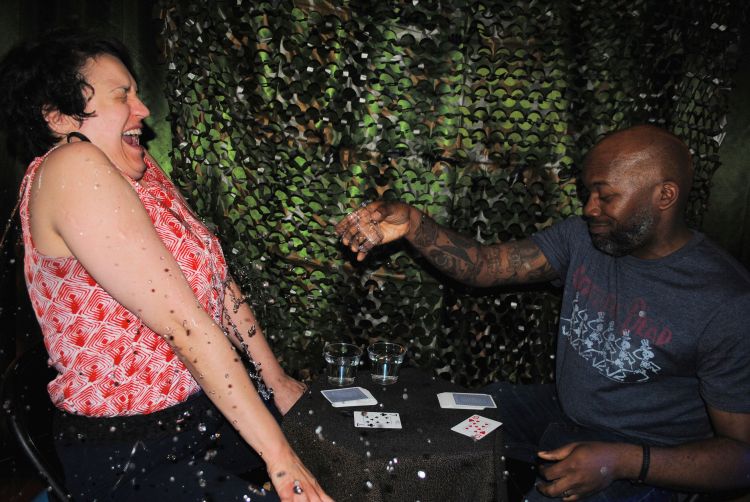 After an intermission, we dove straight into the lip-syncing performances. Sara rocked out to “Ice Ice Baby”, Maryanna and Susan did an impromptu performance to “Push It”, I got to wear my rhinestone encrusted leotard while I sang along to Ke$ha’s “We R Who We R”, and April and Sean came in and killed it with an obviously heartfelt duet to “Never Gonna Let You Go”. 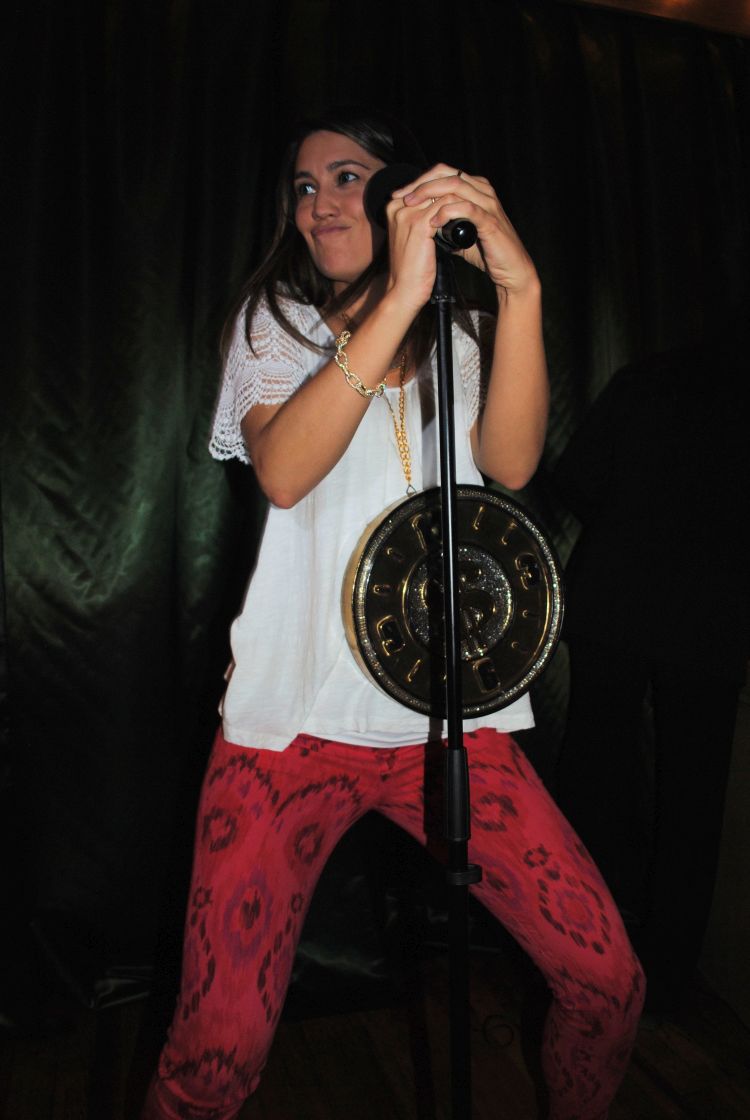 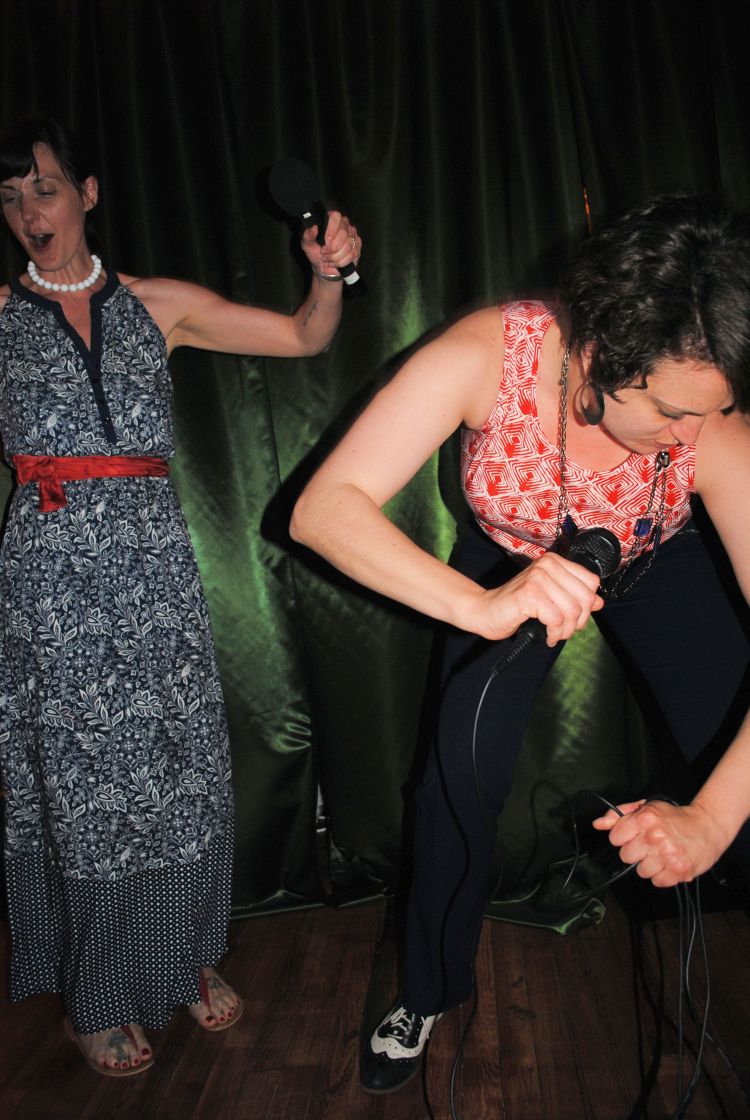 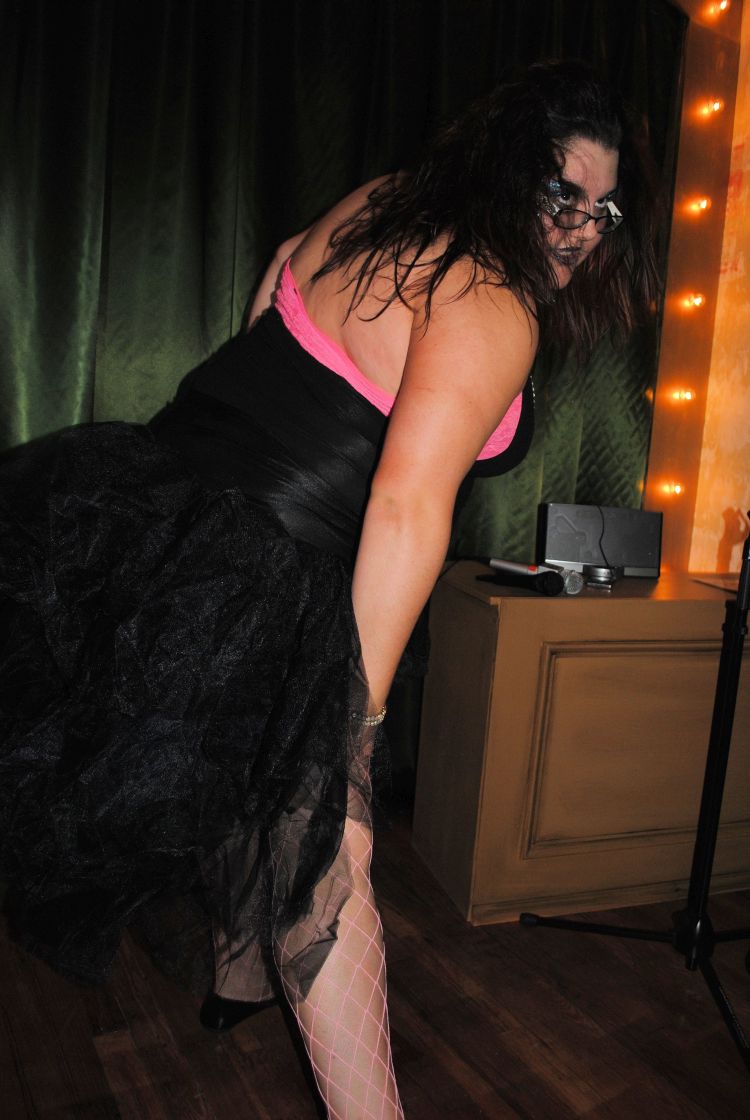 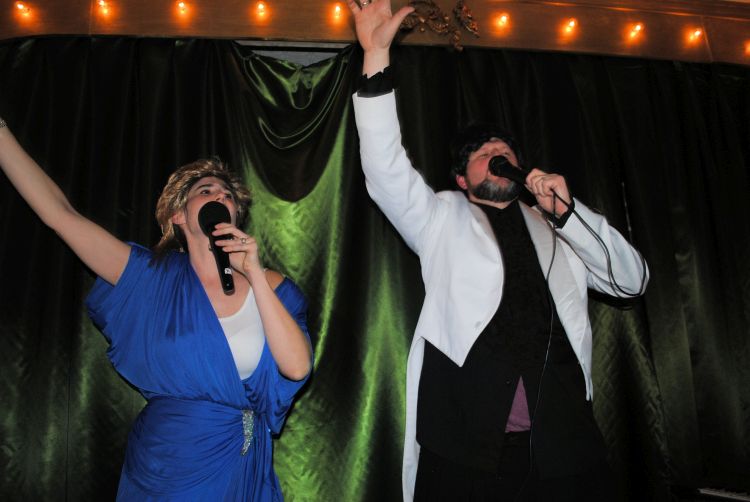 For the next guest, Dio came back from the dead. April questioned him about his early music career, his new beard, and what it was like to be dead. 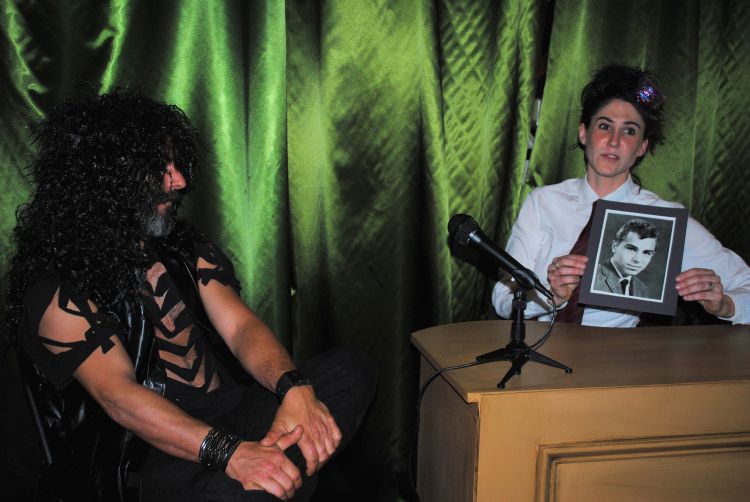 “Yeah, that album was doo-wop-y in nature. Back then we were really focused on songsmanship.” – Ronnie James Dio

After we learned more about Dio, he graced us with a live performance to “Holy Diver”. It was just as amazing as you would imagine, but then all of a sudden a giant dragon made of balloons entered. Dio had to battle the dragon, and he won. We divided up the dragon parts equally. 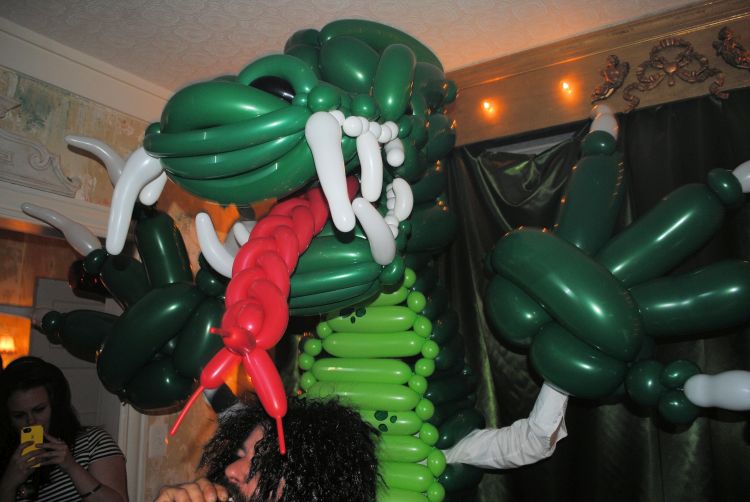 The entire party was surreal. It’s hard to believe that I have friends who can put this kind of thing together. There was a stage, a live band, a fog machine, a kiddie pool, prizes, and props galore. For the finale, April propelled toilet paper on the audience. It was the perfect night, and I really hope she had a brilliant birthday. We love you, April. We appreciate everything you and Sean do for your friends. 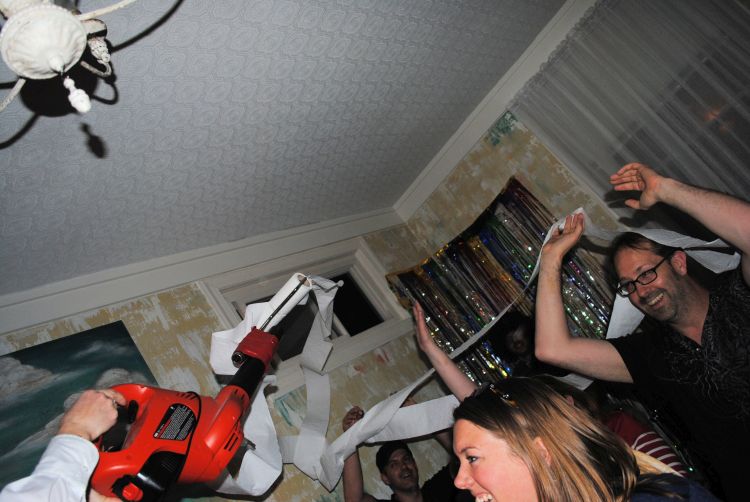 You should totally go “like” April’s Twisted Entertainment on Facebook. She’s not just the best party thrower of all time, she also eats fire, walks on stilts, and paints faces. And see my album for tons more photos.

[edit] April uploaded the trailer video. It’s basically a sneak peak of each activity you would have missed if you weren’t in attendance!