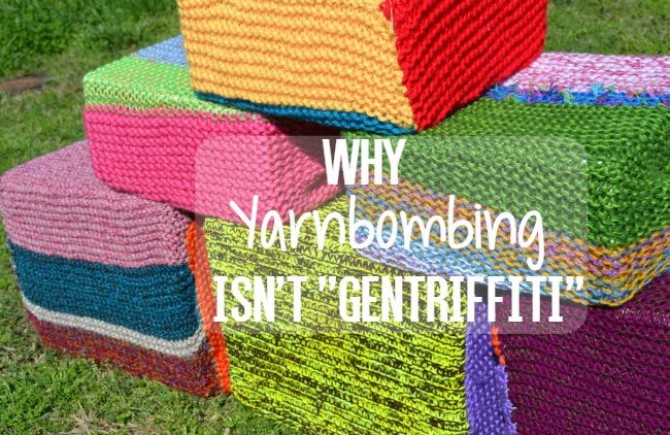 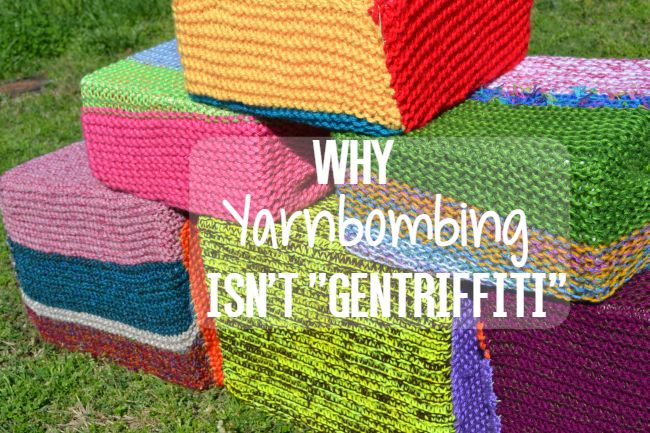 Yarnbombing is the act of knitting or crocheting something, then affixing it onto an existing object. Examples of objects include parking meters, bike racks, trees, poles, and other inanimate objects. I can’t think of one form of street art that isn’t disputed somewhere, and yarnbombing is no different. Some people think graffiti adds character and can brighten up a dreary block, and others think it takes away value and prestige. Some people think murals are a gorgeous art form, others think they’re destructive. Everyone is entitled to an opinion, and it doesn’t surprise me that yarnbombs are attacked the same way other mediums are.

Recently, my friend sent me the image below and asked me how I felt about it as a yarnbomber. I’ve had many people send me angry e-mails or post comments on my work saying that I should have “knit a sweater for a homeless person instead”. The image below is referring to small yarnbomb on a bike rack, claiming that the artist should have “made a sweater for someone who needs one”. 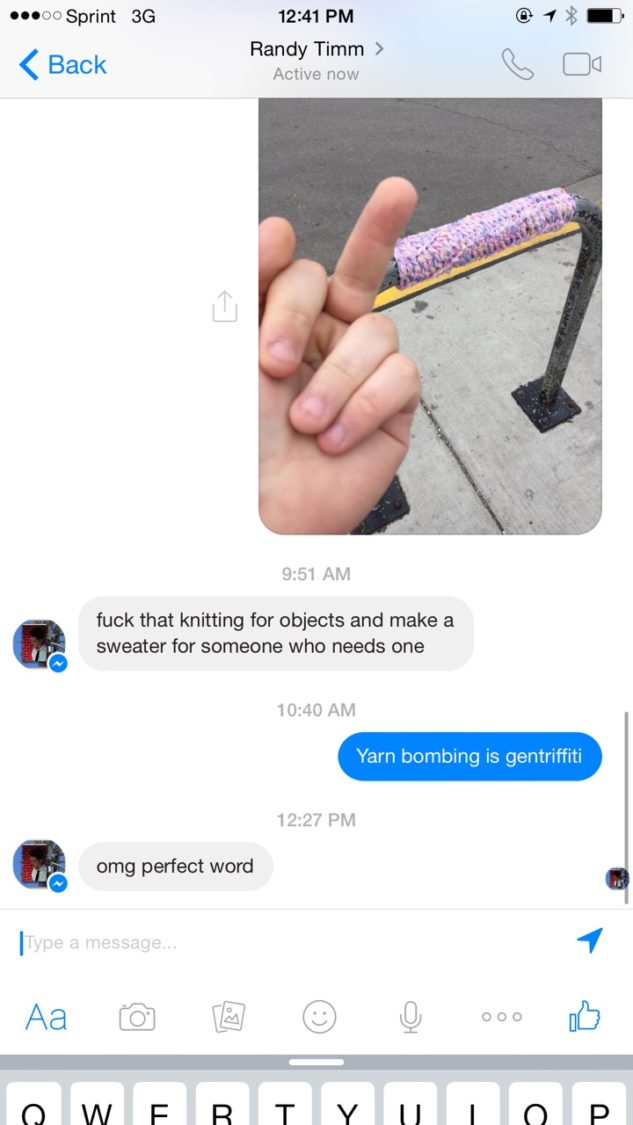 I’d like to defend yarnbombing, specifically, with these three counterpoints:

Art installations and helping the needy are not mutually exclusive. I can spend my free time knitting for a bike rack and making kits that I hand out to panhandlers on the street. I can pass out food, donate money, and still make guerrilla art installations (and so can you).

Also, if you’re doing yarnbombing in a respectful and considerate manner, you’re not leaving the installations up for prolonged periods of time where they have the chance to get moldy and gross. I have knitted panels for a yarnbomb, installed the yarnbomb, uninstalled the yarnbomb, washed the panels, sewed them together to create a blanket, and given them to homeless people on the street. You can have the best of both worlds!

Don’t forget that you can also use yarnbombs to convey important political messages. Below, you’ll see a yarnbomb I put up during the riots in Baltimore this spring.

2. If you think anytime someone is knitting a yarnbomb they should be knitting a sweater for the homeless, then you should also feel that any time anyone is making any type of art they should be volunteering at a soup kitchen instead.

Just because the medium of yarnbombing is something that can be used to make clothes doesn’t mean that it’s automatically politically incorrect or unethical to use that medium for any purpose except for helping those in need. In order to keep consistent with this theme, you’d need to criticize artists who spend hours and hours perfecting a painting on a canvas or a mural on a wall, and people who spend their money on hobbies like collecting action figures, or making jewelry, or paying bar tabs every weekend because technically they should be spending their time in soup kitchens and donating their money to non-profit organizations that assist the homeless.

I would agree that having expendable income to pay for hobbies of any kind is a privileged activity. There are way too many families who don’t have enough money to buy food for the week, let alone craft supplies, but I don’t necessarily agree this means those with the means shouldn’t have hobbies. You should give back to your community and help where you can as much as possible, but that doesn’t need to be independent of having hobbies and spreading cheer. 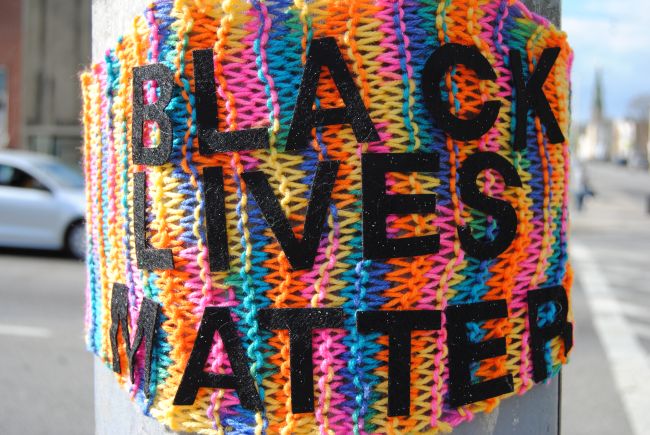 3. There are plenty of separate systems in place for donating clothes to the homeless.

As I said, choosing to dabble in knit graffiti doesn’t mean you can’t also help the homeless. I donate clothing to the homeless on a regular basis, and there are specific systems in place in cities all across the country for this very thing. It’s much easier for me to donate a sweater I no longer wear to an organization that helps the homeless population than to knit an entire sweater.

On another note, the times I’ve gone the more guerrilla route of attempting to donate blankets and clothing to panhandlers on the street (instead of going through an established third party agency), seventy percent of the time the people I’m trying to give my handmade blankets or second-hand clothes to will either express disappointment or disgust with the fact that I’m giving them these goods instead of cash, or they will straight up refuse my donation. Obviously not everyone falls into this category, but we need to consider the lifestyle of the homeless before making accusations.

It’s possible the homeless person I’m trying to give a handmade sweater too doesn’t want my gift. She might already have a jacket that keeps her very warm at night(and doesn’t get soggy when it rains), and she might not want to carry around another item all day.

If you’re interested in free patterns for using your yarn for those in need, here are some Ravelry links to check out:

If you’re in Baltimore, you can find information for donating money, clothing, and your time to the homeless via Health Care For The Homeless. You can also find locations of donation bins for St. Vincent de Paul of Baltimore, and wish lists/drop-off locations for Baltimore’s Helping Up Mission.

And here are 103 Random Acts Of Kindness you can try today.