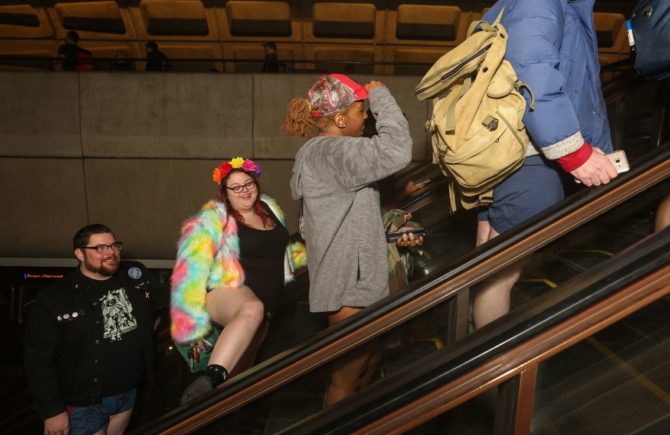 If you’re new around here, I’m happy to introduce you to one of my favorite annual traditions: the No Pants Subway Ride! It started way back in 2002 in New York, when Improv Everywhere was just beginning. Now that group is a straight up movement, and the event has taken the world be storm! It’s replicated in 60+ cities around the globe, and the New York City event has anywhere from 4,000 or more people participating every January. If you want to read more about the wonderful origin of this idea and event, check out Improv Everywhere’s history page! As for me, I’ve been doing this for so many years it feels sacrilegious not to do it. And now I know, because the day before this year’s event, I spent 8 hours moving heavy boxes up and down three flights of stairs and when I woke up that Sunday morning with a few inches of snow on the ground and more coming down, I could barely move. I genuinely considered not going for the first time since I had started participating. The idea of not going physically pained me. Not just because of tradition, not just because of the fact that I was getting to introduce Joe to the event and he was so excited for it, but because it’s important to me.

It’s like I told a German reporter who was covering the event (I can’t find her article! If anyone finds it, she told me she was from the German Press Agency!)… This is a wonderful combination of two of my passions: body positivity and performance art. What a better way to combine and celebrate both?! See, the way Charlie Todd (the founder of Improv Everywhere) imagined this scene (their preferred word for what they do, instead of “flashmob”) was that everyone stayed in character and acted like they genuinely forgot to put on their pants that morning! You can come up with any reason you want (shark ate them, you don’t own pants, you didn’t realize till just now, whatever), but the idea is to look truly shocked when someone asks you why you aren’t wearing pants. The beauty of this type of event/performance art is that you’re giving someone a weird story to take with them. They might never look into it and never know why you weren’t wearing pants that day, and use that as their first date ice breaker or dinner party story. Either way, you’re giving them an interesting experience, to say the least. Every year, I continue to get the same questions. Why is this in the winter? Why do this at all? What’s the point?

The point is aforementioned. To cause a scene. To be weird on purpose. To give people a story. And a bonus of this particular event is you get to take your pants off in public, exposing more of your body than you typically do — a great out-of-your-comfort-zone act of body positivity and self-love! This year, the snow deterred a lot of people. It was probably the smallest group I’ve ever traveled with. But I actually really liked it. It not only was more intimate and I was able to talk to more people, but it was easier to keep true to the original mission of staying in character. The reality is when you get a hundred people, let alone thousands, all not wearing their pants at once it is definitely a crazy, hilarious, beautiful visual, but it’s kind of obvious something was planned. With a small group, it’s easier to get people wondering. We had people’s jaws straight up drop, and one girl told us we were crazy and got up to move to the back of the train. One of my favorite moments from this year in particular was when we got on one train, there was a group of people who included a bucket drummer and a singer. They saw our energy and gifted us with some wonderful music. I started dancing with my pants off, and Amanda from DC Refined caught this picture of me in my most happy, natural state (see below). Another thing that was unique to this year’s event was that I actually wore pants to the event! I actually haven’t owned pants since years before I even started attending the No Pants Subway Ride; pretty much all of my 20’s. I’ve generally felt restricted by them and my wardrobe is comprised of dresses, skirts, leggings, and tights. But last month, I found a pair of slinky black pants with rainbow glitter stripes, and I knew I had to have them. It meant make an exception, but I’m past the point of needing to stick to some trope or rule I created when I was 22 instead of wearing something that makes me happy.

So essentially, I debuted my first pair of pants in almost a decade at the No Pants Subway Ride, only to take them off publicly (outside in the snow). See a close up of them in my recent Weekly Happiness post. I think it’s safe to say the initial “shock value” of this event has worn off of me, but not in a bad way. Now I can focus on connecting with people, documenting it, and freaking strangers out. I love our organizer from Capitol Improv (based in DC), Chad. I look forward to seeing George who I’ve gotten to know over the years, and even came to my Bubble Parade last year! I’ve only seen him clothed once, and he’s always representing the Cupid Undie Run, another way you can take your pants off publicly (but for charity)! And Randy always delights us with the best costumes — that he makes himself, by the way (see below)! If you’re interested in participating, there might just be an event in a city near you! Set a reminder to look this December! And if you have any questions or want to know more specifics, please feel free to ask!

Here’s a little footage I managed to grab while we were there.