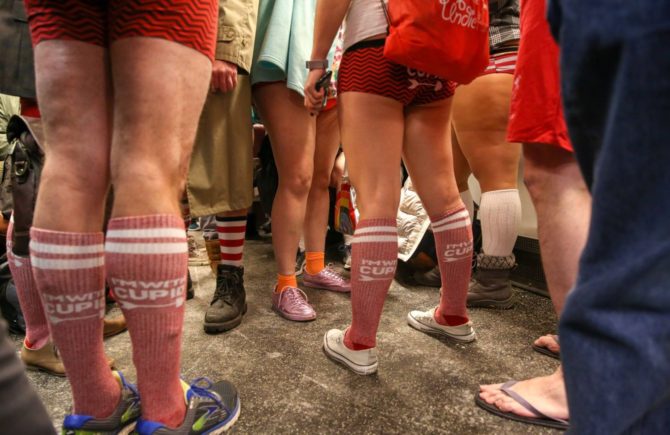 ﻿When people asked me how long I’ve been doing the No Pants Subway Ride, I was genuinely surprised to answer with, “Five years!” In 2013 I started doing things I’d always wanted to do, and here we are five years later, keeping traditions alive. I’ve made and lost friends in the process, learned a lot about myself, and taken quite a lot of photos since then, but holy crap it’s been half a decade since I told myself, “No matter what happens on Sunday, whether people say they’re coming with you or not, you’re going to DC in the afternoon and taking off your pants”. And to be honest, the majority of the time I’ve gone alone to this event! I’ve only had people come with me twice, and I’m actually really okay with that. It means that this is something that means something to me, no matter who is coming or participating. I’m going to follow through no matter what happens. If someone says they’re coming for two weeks and the morning of bails, it doesn’t matter. I’m still going. This is an event that speaks to me on one of the closest things I know to be a spiritual level. On the morning of January 7, 2018, it was cold as hell. We were barely in the double digits, no one was coming with me, and I knew I had a 45 minute drive + 35 minute Metro ride + parking and train fee ahead of me just to participate in something that there was no guarantee anyone else would be at. Cold had deterred people in the past, who knew what would happen this year? I thought about not getting out of my warm bed, not showering, and not going. Then I imagined tomorrow. Monday, January 8, 2018, when I had broken my four-year streak of attending this event that moved me to my core for more than one reason. I regretted it. I felt bad. I knew I had to go. It wasn’t an option. It was going to suck to put on gloves and pay for Metro fair just to get off to meet people in a park for a second before we got right back on the train to take off our pants, but it wasn’t about any of that. It was about sticking to something that meant to something to me. It was about doing something that made me happy. When something makes you happy, you show up. And if you don’t show up, you wish you did. I wasn’t interested in wishing, I was interested in doing.

So I showered and haphazardly shaved my legs. I put on underwear I didn’t plan on the night before which ended up being super slick and slide-y and I had to keep pulling up the entire day. I grabbed gloves, chapstick, my water bottle, and headed out the door. I didn’t stay more than an hour. I got to the meet up in the park at the L’Enfant Plaza Park stop just in time to move as a group towards to escalators as a grass roots band played their brass instruments for us in a celebratory fashion as we descended underground to hold our cards over the sensors and go deeper downstairs to board the first train to wherever. I saw my friend, George, who promotes the Cupid Undie Run every year in his bright red undies. I met up with Randy, who always shows up in a costume that beats last year’s (it was a rainbow clown outfit this year that no one could stay away from). I talked to a couple news stations, some who remembered me from previous years. I posed for photos, I got on trains and held onto the metal bar that grounded me as we moved to whatever was the next station.

When I first started this project, started by Improv Everywhere, it was more “underground” and grass roots. Not as many people knew what was going on, there weren’t as many news stations, and people were more into the original concept of the idea, which was to pretend to ride public transportation sans pants as if you genuinely forgot to dress properly. I got a comment on the footage I uploaded from last year’s ride which asked, “What’s the reason for these no pants rides?” It’s a reasonably questions, and I’m going to screen shot the response I gave. Do I wish it was still more organic and based on the original idea? Yes. Do I regret that more people are involved and it’s evolved into what it is? No. When anything evolves, you have to accept that the original idea is going to morph, and that’s okay. I wish we could have both. I wish we could have our cake and eat it, too. But so many of the people who came out to this year’s event for the first time in DC were ready to just dance in middle of the landings in their underwear, that I can’t be mad that they’re not being subtle about it. I’d ultimately rather more people be on board with uncustomary ideas in a more conforming fashion than not at all. My camera actually ended up dying almost as soon as we took our pants off, so I didn’t get that much footage. And I actually left after an hour because I had to pee, I was cold, and I didn’t plan on going to the after party anyway. But you can check out tons of pictures, video, and other documentation of this year’s DC No Pants Metro Ride by Googling it or the Facebook Event Page. Thanks to Capital Improv for continuing to host it! You know I’ll be out next year.