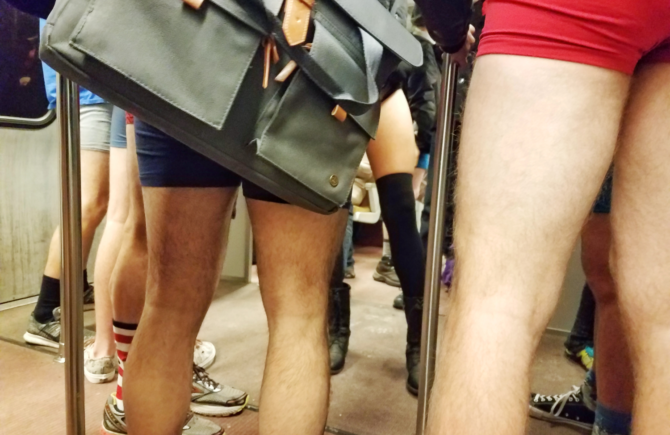 It was the second Sunday in January, so it was obviously time to take our pants off. It’s hard to believe it’s the fifteenth anniversary since Charlie Todd started the tradition in New York with a handful of his close friends, which has since turned into a global tradition with tens of thousands of people. Thank glitter for Improv Everywhere. I made my way to DC for my fourth ride on what turned out to be the coldest day of the year so far in my part of the country. I’m even wearing gloves, which don’t seem to be doing much for my skin peeling like a lizard as you can tell from this photo of me proudly holding my Metro card as we’re about to enter the station from Hancock Park where we rallied together. Usually, the idea is for us to meet up together and make a plan to meet up at a bar for an after party later. We go over the “rules”, if you will, which are basically just to make an excuse as to why you’re not wearing pants when you’re asked and if a police officer asks you to put your pants back on, you do it. The idea is it’s a scene/flashmob, and we’re all “in character”, so it’s way funnier to say you left your pants at home than explain the entire history of Charlie Todd and his creation of the amazing group Improv Everywhere. That said, this year due to the severe weather conditions, we had the smallest turnout we’ve ever had and an executive decision was made that we wouldn’t spread out and ride the Metro randomly in pairs and small groups like normal — we’d ride it as a giant group all at once the entire time.

It was a really interesting difference! It went from a judgmental reaction to more of a “what the fuck” reaction, and it was really interesting to see. Apparently if a group of five or less people aren’t wearing their pants they might be skanks, but if a large group of people are doing it they’re weirdos, or at least weirdos with a cause. I don’t know what the truth is for us, but I know we all had fun and exploring the whole riding as a group thing was definitely cool for all of us. In cities like New York, you get to experience that vibe because so many people do it at once it’s insane, but in DC there’s such a small turnout that we have the option to choose what kind of vibe we want to cultivate and I think that’s really fantastic. Once again, I got to be on Fox 5 news! You can spot my brightly colored butt (and talking face!) in the below clip multiple times. I also hung out with Liz from WTOP News and love the picture she took of me which you saw above. You can see her whole write-up here.

I also took a little footage of my own during all the fun chaos, which you can check out below! Would you ever participate in the No Pants Subway Ride in your city?
in Performance 14 Jan 201714 Jan 2017 2 comments
Share
Post tagsDCperformance