If you were one of the 70 people I sent Halloween mail to, you should have received it by now. Halloween is my favorite time of year, so obviously I have to celebrate with some spooky mail love! 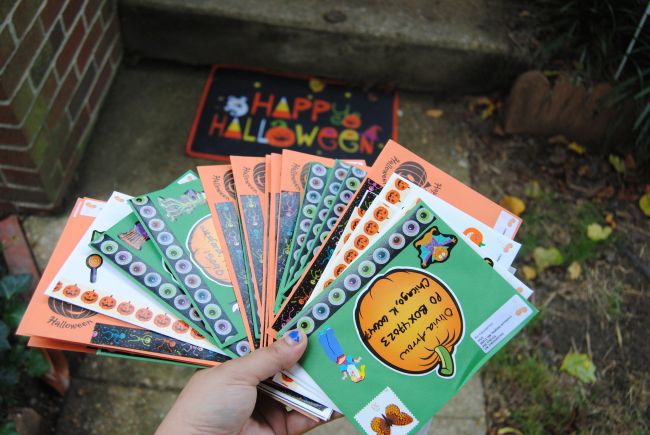 I didn’t just send it, though! I’ve been receiving it all month, too. I’ll go to the post office again on Friday, so if you’ve sent within the past week I’ll be picking that up soon. Check out this awesome confetti assortment from, guess who? The Confetti Monster! 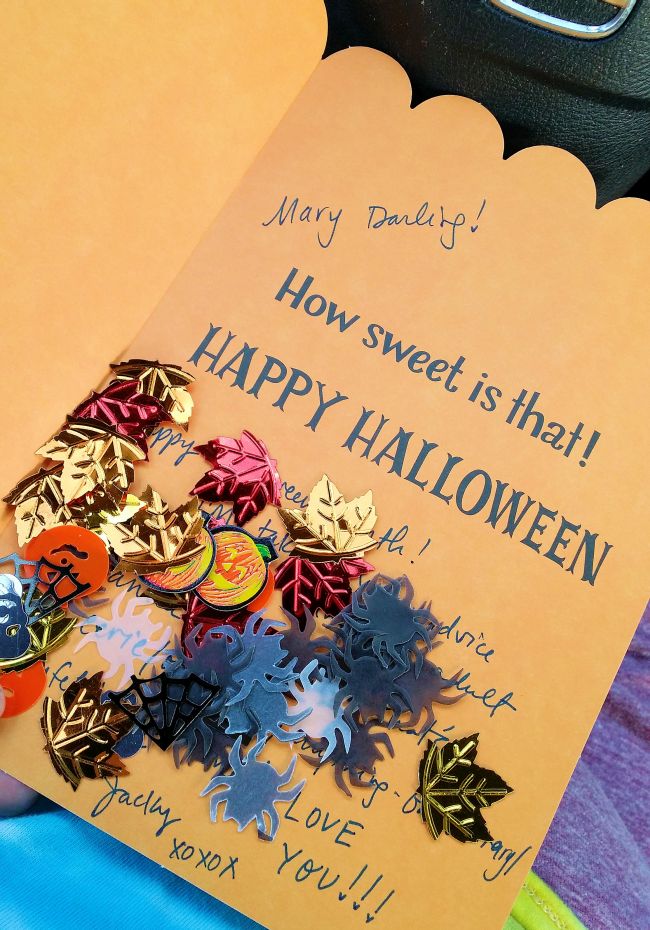 Michelle correctly utilized the brand new Batman stamps to send trinkets in a themed baggie (bottom left), and Sara in Switzerland is celebrating from across the ocean (top right)! It hasn’t all been Halloween themed, though. Earlier this month, I was in a bit of a funk.

I can attribute one single event to getting me out of that funk, and that was a beautiful package from my friend, April, in Chicago. It was full of treasures, and some of them are in the top left photo. And every so often Karen sends me a care package! Bug loves the smell of her cats, and he doubly inspects her packages (instead of just the usual once over he gives everyone else’s). This month’s package was in the shape of a treasure chest, though! How cool is that? Almost as cool as the derp face Bug is giving me in the foreground. 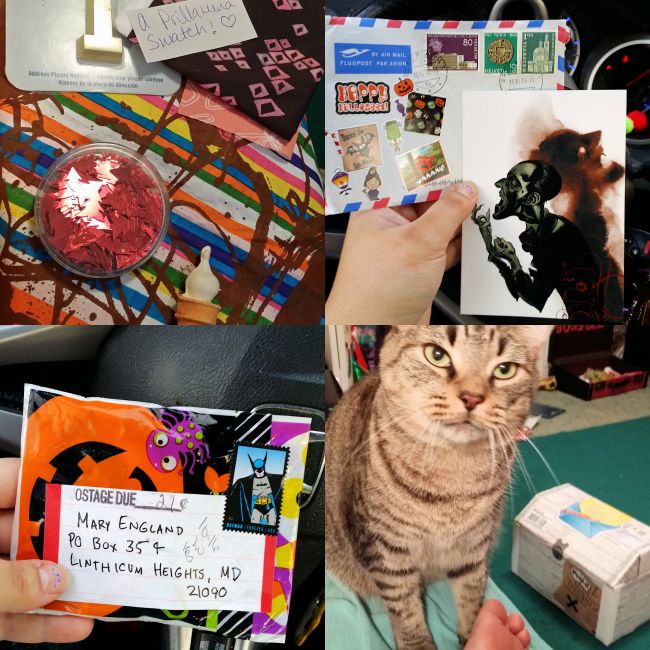 On the 9th, AKA World Post Day, I headed over to the Postal Museum in DC for the monthly social hosted by Melissa and her constituents. I got to see my friend, Allison (it had been over six months!) and I got to meet the Missive Maven herself. She took the following two photos, and you can see more of her recap of her first ever social here. 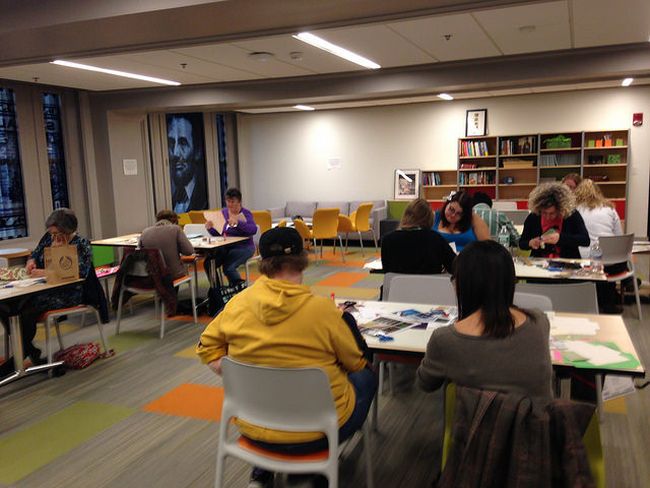 The night’s theme was on envelopes, and we got a nice little lecture to kick things off. It was fun to watch other people make their first envelopes while I used the time to tackle my beautifully never ending pile of mail to respond to. 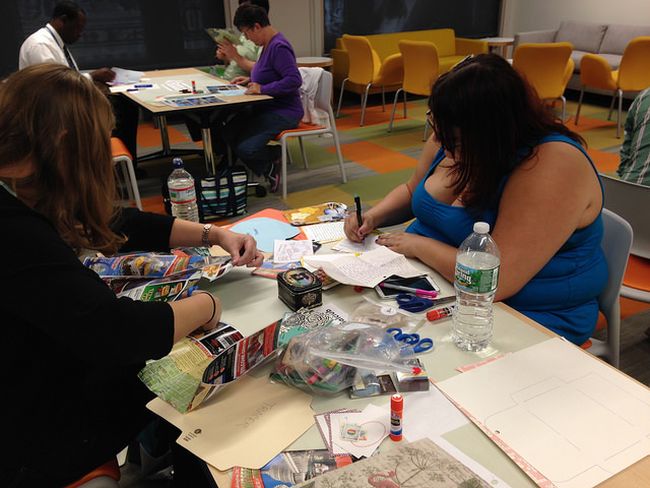 Speaking of which, this batch of envelopes is finally going out today. Most of the letters inside these guys were written weeks ago, but I just never sat down to seal the envelopes and walk them down to the mailbox. My apologies on the tardiness of the replies! 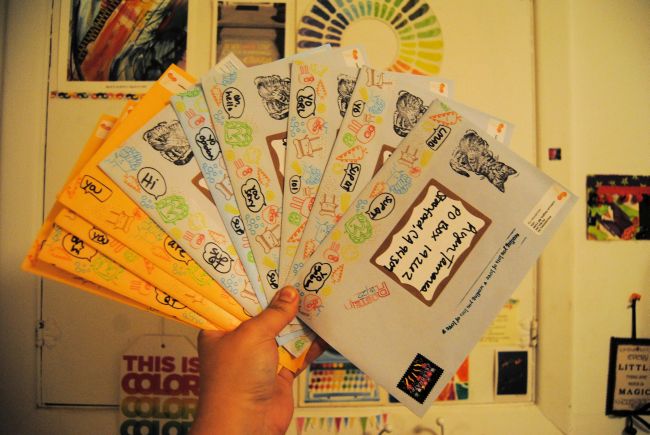 This red themed stack went out weeks ago, though. Did you happen to get one? 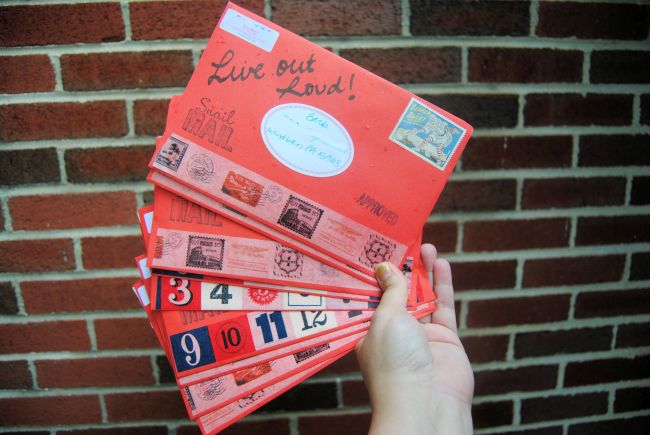 . I sent quite a few of them over the past few weeks. I received them as a gift from Julie for showing her son’s stuffed animal a good time. 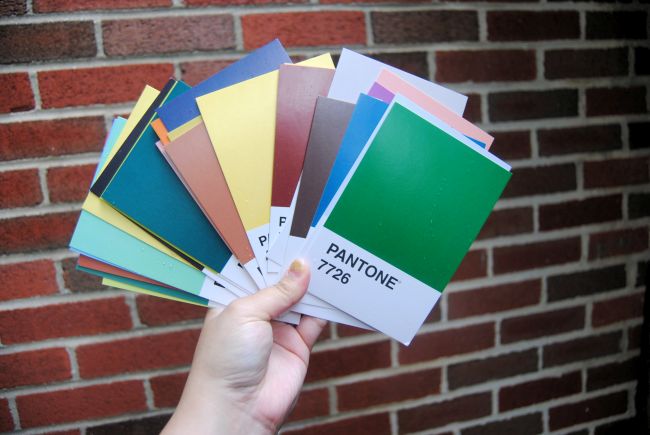 These yellow envelopes are stuffed with local surprises and literature from nearby attractions. I sent them to strangers I found on Send Something. 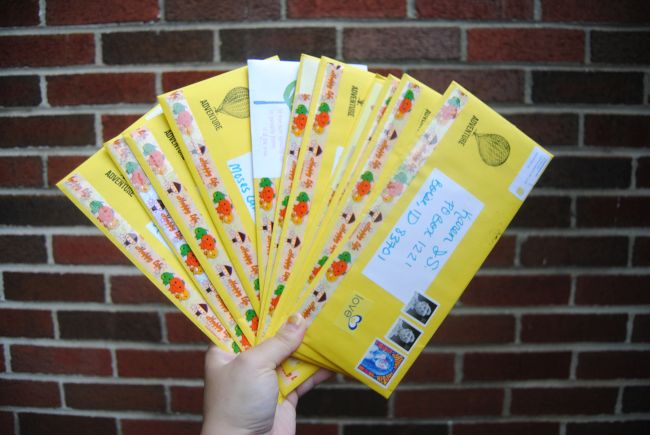 My favorite thing I received in the mail since the last time I checked in with you, though, was a package from Michelle. A long time ago, she introduced me to a song called “Stars Were Exploding” by Good Luck. The song really resonates with me; so much so that I did a little installation based on it. Michelle knows I like the song as much as she does, and she sent me the most amazing and thoughtful package ever. Inside the box I found a Mason jar full of origami stars, and some handmade stationery with a story on it that makes this fictional song a reality.

Went to Lake Griffy last week on our way back from the funeral. There wasn’t a twinkle in the sky. ‘Time for a swim’, he shrugged and said to me. Among lost lover long forgotten and the musings of a 12-year-old mermaid, 100 of your wishes rested beneath sand, stones, and starfish. Didn’t bring them back to life – thought that was better done by your hands! – M” 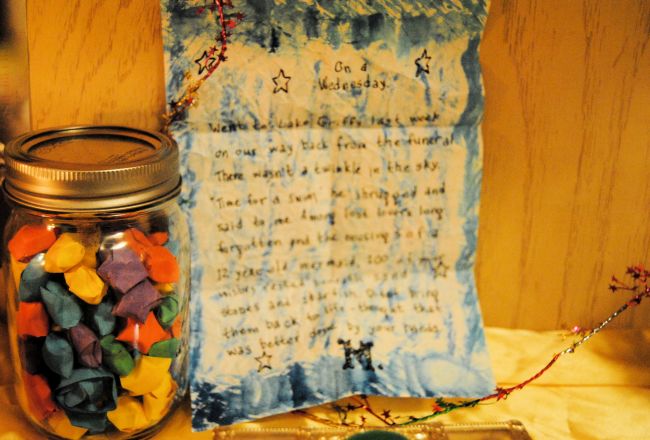 (The package actually inspired me to do something specific, which I will share at a later date.)

Speaking of snail mail, have you signed up for the giveaway Michelle and I are doing for the Peacock Brigade? You may not win a “big” prize, but as long as you enter you will get something in the mail! Might as well try!

What’s been in your mailbox lately?