I made an event on Facebook and let people know that they could mail me their plushies or arrange to meet up with me in person. I ended up throwing a party for thirty of your stuffed friends ranging from friends down the street to a lovely lady in Scotland. I appreciate everyone being willing to share their loved ones with me, and I hope that when they get home they tell you their trip was worth it.

A warning that this post is super image heavy, but I think you’ll enjoy it. The adventure started off by loading everyone up in my car (which was decked out in signs advertising the sleepover). Where were we going? The Hamilton Hallucinatory Herringbone House (4H), of course. AKA April‘s chateau. The perfect setting for a magical slumber party.

We listened to Streetlight Manifesto on the drive up so we could have a dance party. Everyone was pretty okay with it, but Dexter, the pink dragon, made it known that he dislikes ska. Sorry, Dexter. 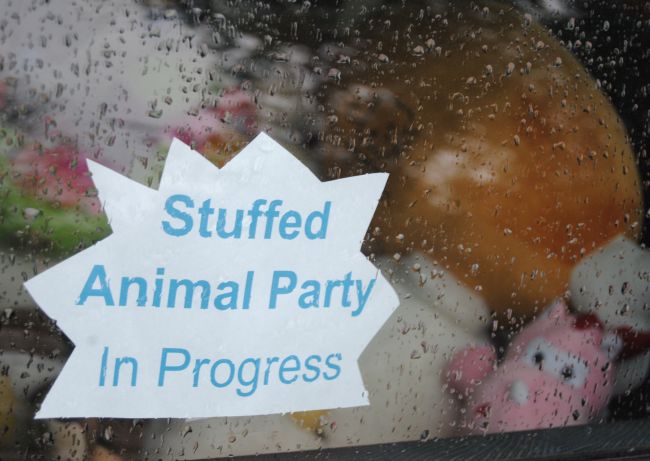 Everyone was greeted with a necklace, and gathered together for a group photo. 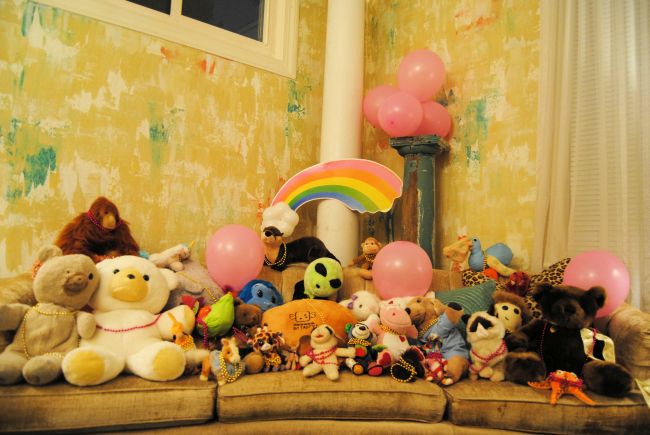 We did our best to make the atmosphere party like. Balloons, streamers, banners… 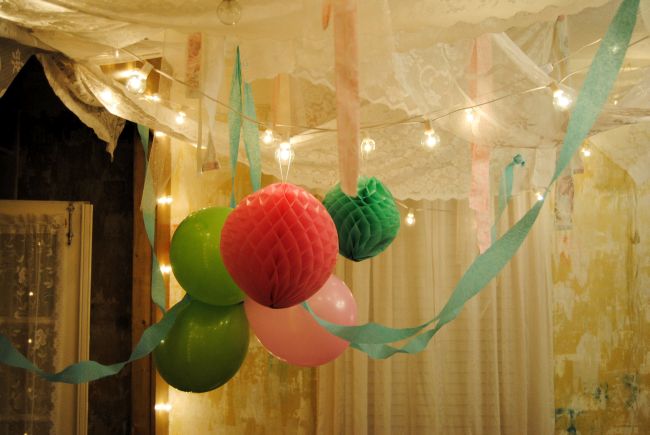 We started to pass out refreshments. Cupcakes, sodas, shots. And don’t forget about the party hats! 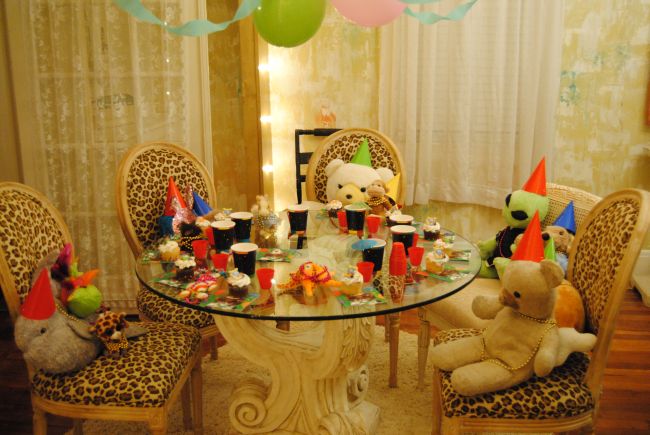 Next, we moved outside to watch April do a fire performance! Three different songs and routines with multiple props. It”s really incredible to watch, and the party-goers sure got a good seat for the show. 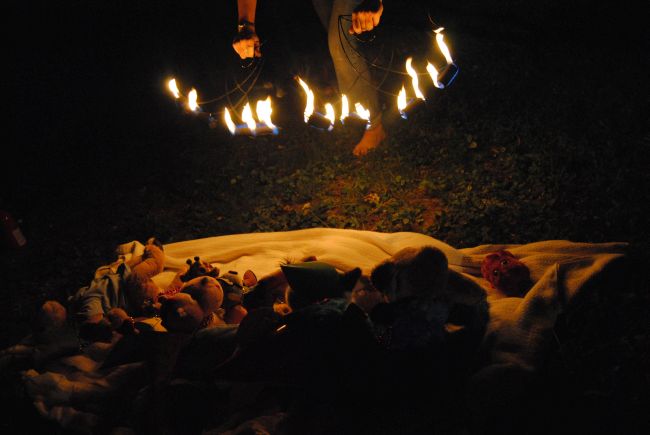 The fire didn’t stop there, though! Once we got back in, April lit this intense candle that fans out into a flower and spins around. Just because it wasn’t anyone’s birthday doesn’t mean we can’t party like it is! 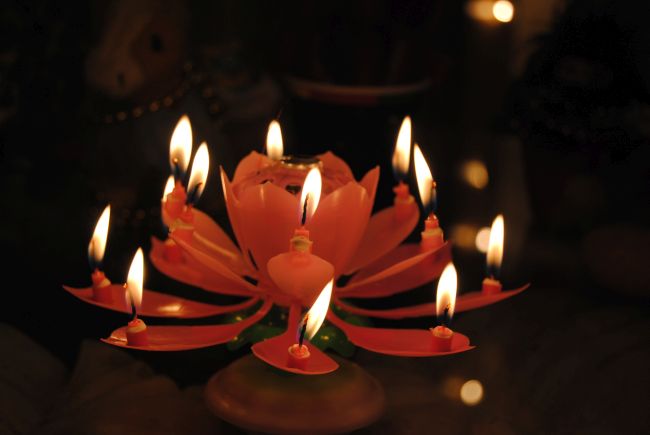 Soon it was time to move to the basement. The party was really starting to get going, and we upped the ante with poker. And a couple late-comers joined us! 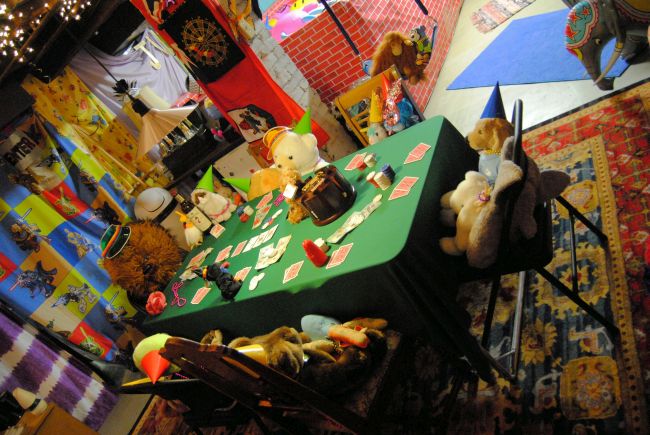 Mia, the miniature pony, got a Royal Flush. Couldn’t have planned it any better! 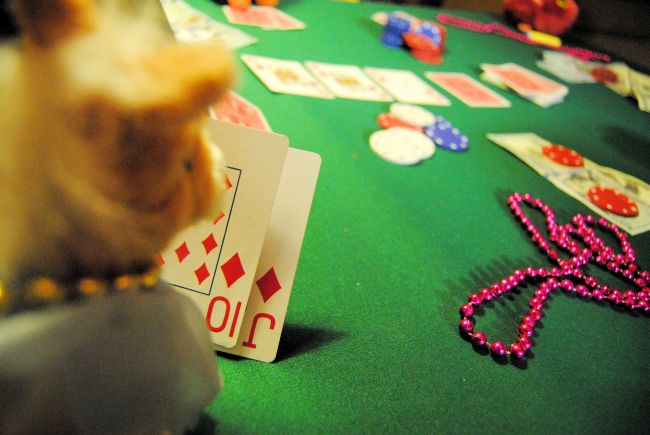 Things started to heat up when we played spin the bottle. Senor Salchicha had been eyeing Claudia, the orangutan, all night. So he was really relieved that she landed on him during the game. A true love connection. 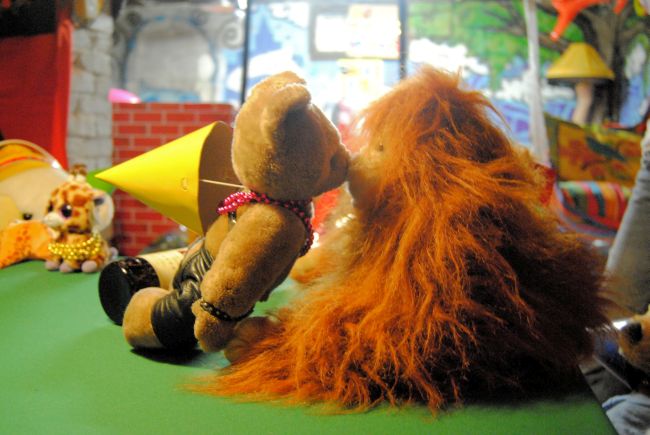 Sean wasn’t about to be upstaged, though! His overalls came off in no time, and everyone was eager to make it rain with their poker winnings to see more from this impromptu stripper. 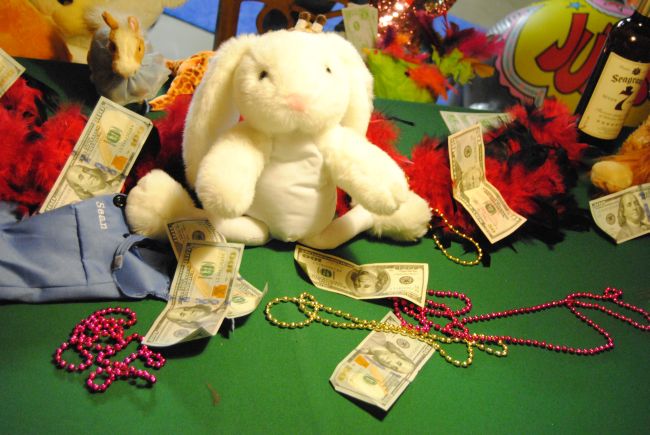 It would be a shame to step foot in 4H without jumping in the ball pit! We all dove in and completely ignored April’s “No Drinks In The Pit” rule that is clearly written on a sign. Things were rowdy, and this crowd couldn’t be tamed. 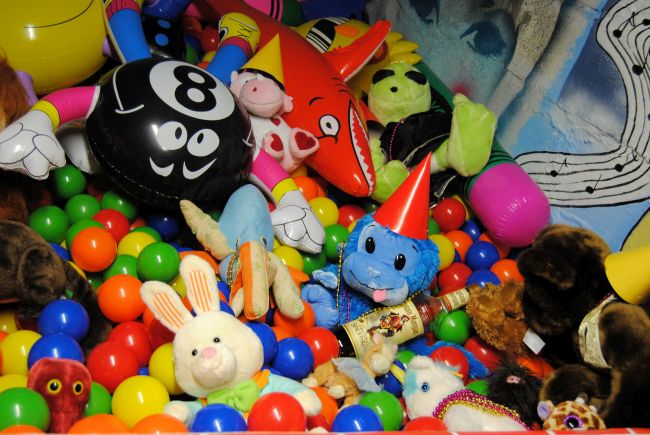 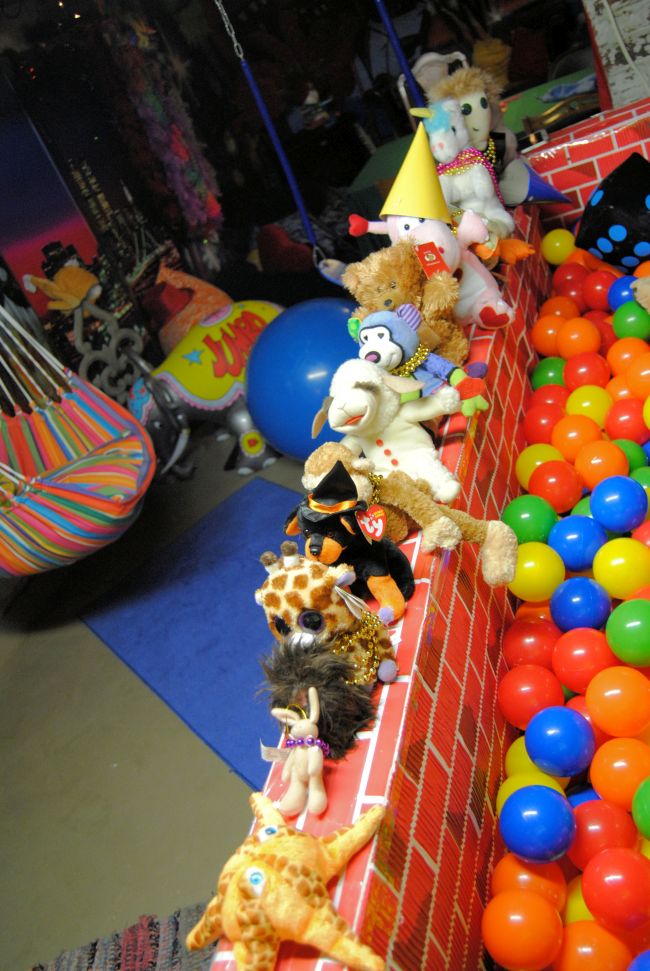 I got in on the action… 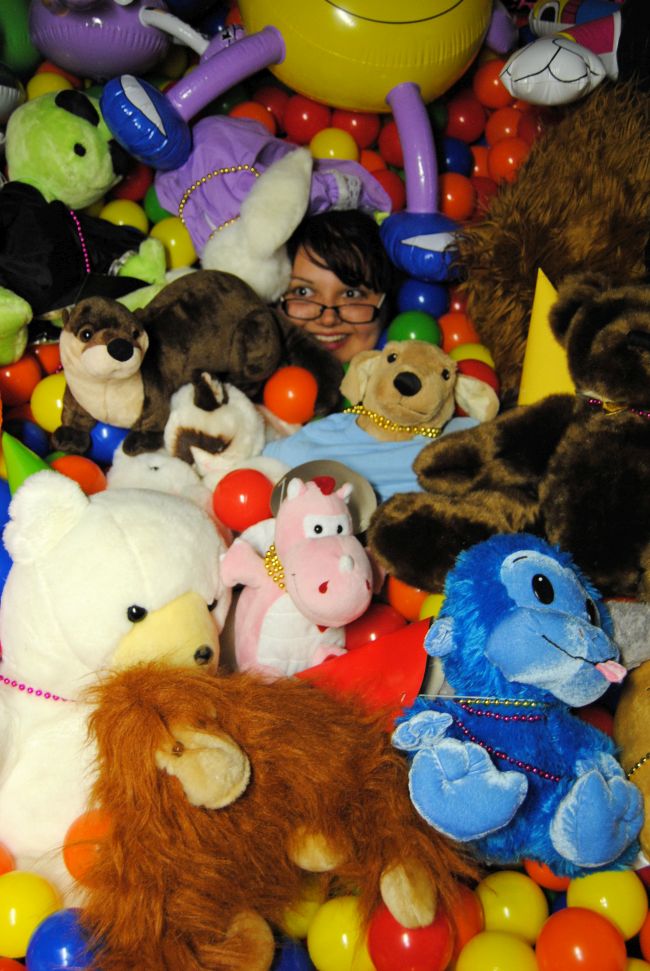 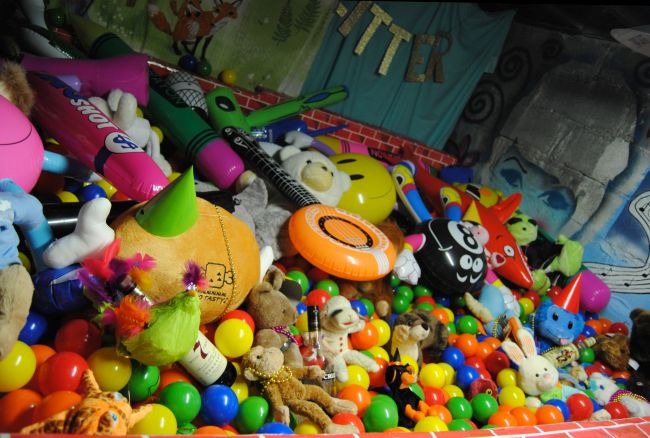 We headed back upstairs for some karaoke. Globbits sang his heart out to “Rubber Ducky, You’re The One”. 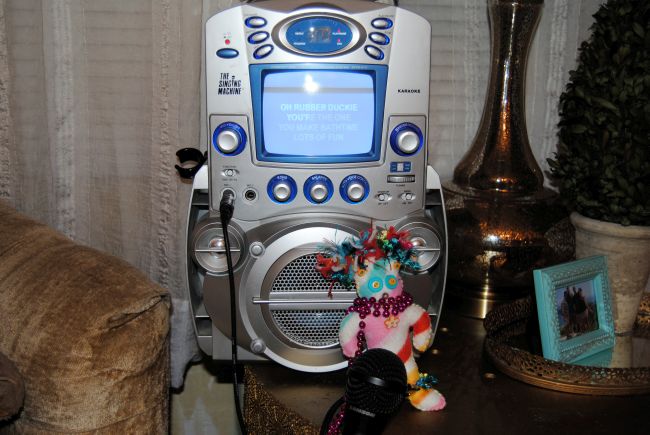 A cupcake pinata was totally made for this occasion! 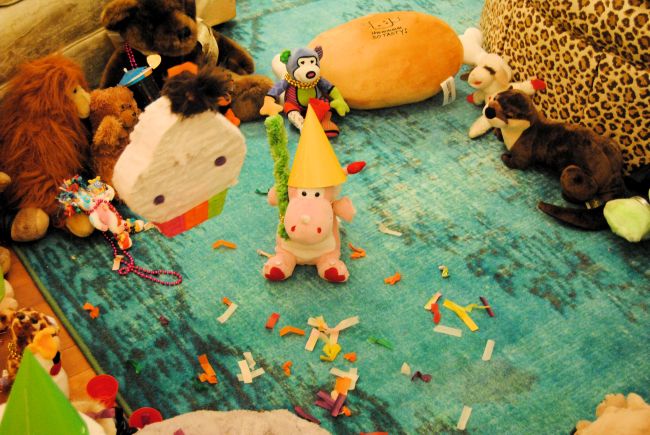 It was getting late, but we had to go out with a bang! Some fireworks in the front yard! 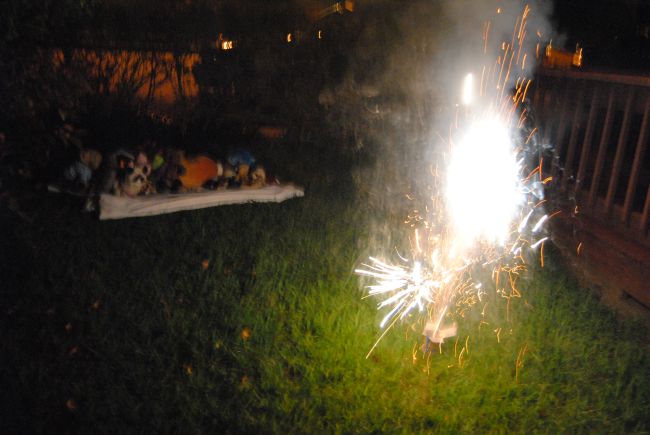 Now it was time to wind down. Story time! 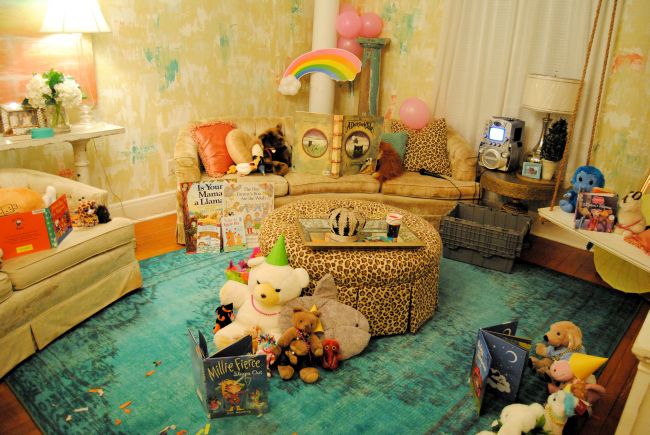 Followed by movie time, and then the actual “sleep” part of the sleepover! 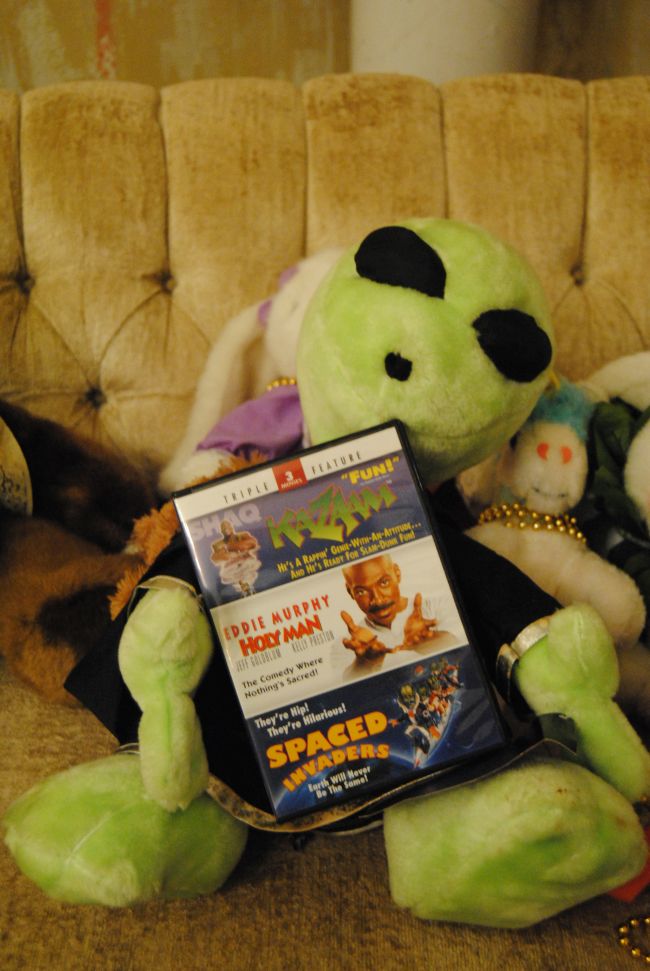 Thanks to all the friends who were able to join us and their parents. Love to Julie + Parker, Candace, Ann-Marie, Ida, Julie, Alyssum, Kim, Maria, Jaclyn, Ally, Danielle + Lucy, Jay, Michelle, Charlotte, Jen + Oliver, and obviously April and her husband, Sean, for opening her home to us!

Check out my Instagram for the photos I posted live that night, and if you’re interested in past Uncustomary Art events click here. My next event is in Baltimore on September 20th, when I will be recreating the Lost Boys Food Fight from the movie “Hook” to honor and remember Robin Williams.