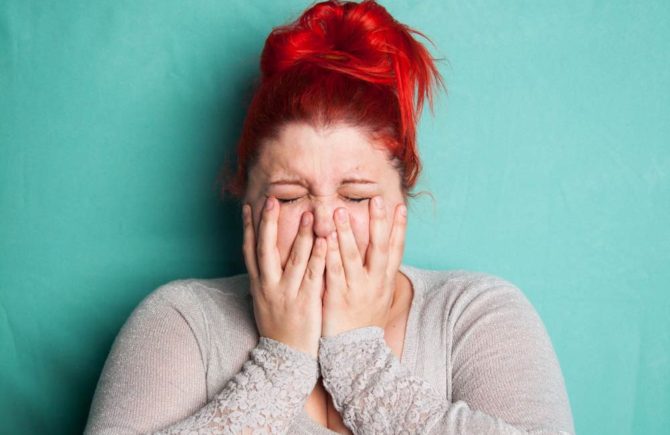 Tourette’s started everything. It’s how I started my first book; it’s how I believe my real life started.

Sure, I had memories before then like realizing I was the only one who could read Mrs. Queen’s cursive notes to herself on the Kindergarten chalkboard or my dad rushing me to my grandma’s house because my mom was in labor with my brother. But, other than those random early memories I think Tourette’s is what began the existence I’m living right now.

It started with blinking. I was blinking really hard. Blinking is something we do all day every day, but it’s more of a flutter. Mine were these deliberate hard shut eye movements that lasted for seconds at a time. It was like this sneeze inside of me that I could try to hold in but no matter what I did to try to prolong it from happening, it still had to come out. It didn’t feel good. It hurt to close my eyes that hard for that long that often. It sucked. And it really sucked that I didn’t know why it was happening. With no answers, my response to my friends questions of, “Why are you doing that?” were met with, “I have allergies”. I knew I had allergies from pollen last spring, and that made me feel weird. Maybe this was just another weird kind of allergy no one was talking to me about. It was really frustrating and annoying, though because every time I went to answer a question when the teacher called on me, talk to a friend, or even just look at the blackboard, my eyelids would crunch down and I’d lose a couple seconds of my life before I could move on. Still not understanding what was happening.

Over time, blinking was the least of my worries. My tics manifested in a large variety of ways. I started nodding my head to the side, scrunching up my face, sucking my upper lip into my nose, squeaking from the back of my throat, touching my chin to my chest, rolling my eyes up or down really hard, swallowing, trying to make my ears pop, clearing my throat, making a gurgling sound, and so many more things. At one point, once I blinked it was a trigger to do everything all at once in a routine order. It was intense and insane. My parents didn’t talk to me about it. I heard them talking to my teachers and their friends, saying it was just a phase. My dad told me to sit in front of the mirror and look at the faces I made to see how ugly I looked because he was so frustrated with me and the situation. I cried as I watched it happen.

I didn’t know the word Tourette’s until I was fifteen when a friend mentioned “my Tourette’s” and was caught off guard when he realized when I had no idea what that word even meant, let alone that I had no idea I had it.

Even once I started seeing a therapist and being medicated for my Tourette’s (and many other mental illnesses), it was still hard to totally shake the tics. The vocal ones left first, but the motor ones stayed. Whenever I was nervous, stressed, anxious, upset, or anything they would come out. I would do a bunch of them before I would go out on stage before performing a dance routine. I would cover my face if I was in public and needed to get a bunch out all of a sudden. If they needed to come out, they needed to come out. I got better at suppressing it, but that didn’t mean I could stop the tics from bubbling up. Once they existed, they were meant to leave my body. It’s always really interesting when people find out I have Tourette’s. One of my tics is an eye roll, so sometimes people will think I’m being rude or sassy and I have to tell them it’s a disorder and they say they feel like an asshole, and then I kind of feel like an asshole. But I also can’t really enter a room and announce, “Hello! I have Tourette’s Syndrome and I will most likely be tic-ing tonight, some of which will manifest as an eye roll. That does not mean I am rolling my eyes at you!” That’s ridiculous and attention seeking. I don’t want to make someone feel like I’m dismissing them, but I also don’t want to start every new relationship with, “HEY, I HAVE TOURETTE’S!”.

Sometimes people will say, “Whoa, cool!!” when they find out I have it. That’s because of the way the media has tended to portray the disorder; as something that let’s you yell obscene words in inappropriate scenarios and get away with it. I used to feel it was really important to educate people that only 10% of people who have Tourette’s have Coprolalia, which is the involuntary use of cuss/inappropriate words. But now I don’t feel like it’s my job to do that. I have a disorder, and if someone seems interested in learning more about it I can definitely tell them, but if they’re scared or worried they’re just going to offend me, I just let it go and move on. What I can tell you is Tourette’s is NOT fun. It’s a neurological/mental disorder that makes you feel completely not in control of your body. I’ve gone through Cognitive Behavioral Therapy to treat anxiety disorders, but it’s so much harder to treat my tics, be them motor or vocal, because it’s coming from a much more physical than mental place. That said, coming out of CBT made me able to handle my tics with much more control, and I highly recommend therapy of any kind, including online psychiatry.

You know what? I’ve been taking photos with Maura for so long, and I’ve done all sorts of stuff in front of the camera. I’ve been completely nude and done absolutely absurd nonsense. But the pictures I took for this article made me feel the most uncomfortable I’ve ever felt in front of the camera. And seeing them felt even worse. The idea of posing for the camera with these faces I’ve only ever known as ugly, and then seeing them looking back at me in a way I’ve never actually seen before, especially the closed-eye ones, is a really intense experience. I hope reading this gave you some perspective into the life of someone living with Tourette’s Syndrome. It doesn’t define them, and the degrees vary severely. They probably don’t shout obscenities, but even if they do they don’t WANT to, and they don’t feel comfortable doing it. All you can do as a friend is keep talking to your friend through their tics and not point it out to make them feel extra self-conscious. They know they’re doing it, they don’t need attention drawn to it.

If you have Tourette’s, I know it can be hard to love the body you’re in that seems to be betraying you every five seconds. Remember it’s not your fault this is a part of you, and you can learn to live with and through this. There’s medication, therapy, and support available to you. You are beautiful when you tic and when you don’t tic. Tourette’s does not define you, it does not define me.