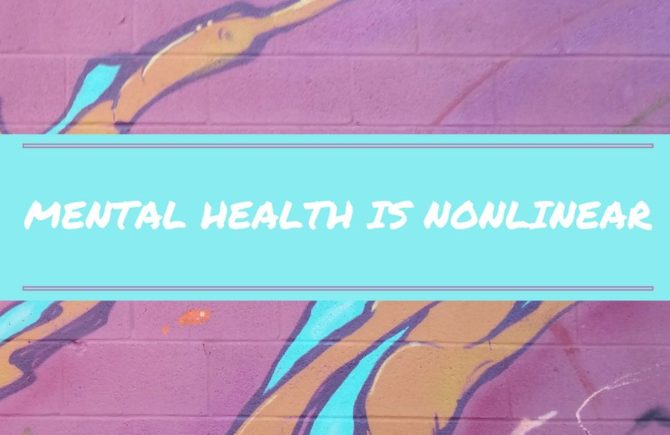 I’ve always known mental health was non-linear. I’ve always believed it. But it was easier to say it to myself and to you because I was generally moving upwards on that metaphorical bar graph. I’d have bad days for sure, but I still felt in control. Since the onset of Bipolar, I’ve felt completely out of control of my body.

It’s not like I’m unfamiliar with depression. My teenage years were plagued with it. But even then I can say that it was in relation to self-loathing. I was angry that I felt out of control of my body in terms of tics and compulsions and my weight, so I internalized hatred which transformed into a deep depression. Once I became medicated for the Obsessive-Compulsive Disorder and Tourette’s Syndrome and started to build my self-esteem, my depression seemed to get lighter and eventually disappear. Only coming around every once in a while.

And it’s definitely not like I’m unfamiliar with feeling like I’m not in control of my body. Having to get out of bed five times in the middle of the night to check doors, light switches, and the microwave timer wasn’t something I was super psyched to do. I didn’t want to make my friends wait in their car an extra ten minutes to pick me up while I stepped on the corner of a throw rug over and over again until I did it “perfectly”. I definitely hated that no matter how long I was able to suppress the face scrunches, hard blinks, nods, and sounds I needed to make, I still needed to make them. I could wait a second or until this dance was over, but I still had to do that thing. They were coming out one way or another, with or without my permission.

Cognitive-Behavioral Therapy changed my life. For sure. I stand by that. When I started in 2011, OCD was the biggest disturbance in my life. It was amazing to realize how I was actually kind of in charge of my anxiety. Having that type of counseling made it possible that I didn’t have to be an innocent bystander in my compulsions or even the obsessive thoughts! I could handle my panic attacks in ways I didn’t know I could. I was able to approach the thinking in a different way that changed how I would view the OCD part of my brain forever.

From then till now, I’ve built coping mechanisms and built an empire of self-love. But recently, I’ve been diagnosed with Bipolar II and it’s rocking my world. And not in a cool amusement park way.

I had always had a mood disorder “NOS” on my face sheet because that depression used to pop up every now and then, and I would have “hypomanic” episodes with the same frequency. But it was never enough to check all the official boxes of Bipolar, so I wasn’t medicated and it was just kind of lurking in the background. But this summer I went from four to five days of depression, one day of either normal or manic behavior, rinse repeat. I started fitting every single box for Bipolar in a textbook way, and I’ve started a mood stabilizer, but we’re still working out the kinks and this process or state of being or my new norm or however you want to look at it is grueling. It fucking sucks.

As flighty and random as I can be, I very much find comfort in logic. I’ve always been the person who appreciates when someone suggests maybe it’s PMS that’s making me act emotionally because then I can say “OH!” and realize it’s not “me” doing it, it’s the hormones. That’s how I feel with anxiety, depression, and everything else. If I have a phobia or a specific thing that gives me anxiety and that stimulus occurs and I have a panic attack, that makes sense to me. If someone dies and I’m heartbroken and go into a state of depression, that makes sense to me. But being at a party where I’m having a great time and then feeling a switch flip inside my body that says “you’re depressed, nothing matters” and you can’t stop the insane amount of tears that are about to come out of your face… that’s jarring to me.

Last night, I was at the studio with Maura and Joe. We were having an amazing time. I tied balloons filled with helium to my hair and put pom poms in Joe’s beard for Pete’s sake. It was wonderful. And all of a sudden Joe saw it in my eyes and asked what was wrong. And I don’t even have an answer. I’ve been saying, “My brain isn’t being nice”. Because I know logically that I should be happy, but now I’m not. My brain is being a bitch, and I wish she wasn’t. I wish I was in control, but I’m not. And even thinking about it makes me cry.

So I want to apologize if I’ve ever been slightly removed from your struggles with mental health. I feel like that’s the thing that separates me from other self-love coaches/bloggers/whatever and the past few months have shown me how removed I’ve been from ACTIVE and NEW struggles with mental illness. That doesn’t mean I haven’t had to deal with stuff popping up every week and I just use my coping mechanisms to deal with it because I have. But I think there was a part of me that forgot just how fucking terrifying and awful all this is.

I hope you don’t find me sharing this to mean that I’m less qualified to help you with your problems. I’ll never let my issues interfere with helping you. If I have an appointment with you on a day I can’t provide my best, I would rather cancel and reschedule than give you a bad experience. I like to think that knowing I’m going through this stuff makes me a little bit more qualified because I’m not just talking out of my ass, but that’s up to you to decide. Anyway, I felt an urge to write about this as I finally woke up this “morning” at 2 pm (because being unconscious felt better than being awake). If anything, it was for me to formulate my thoughts on this in a more organized way than “Oh shit” and trying to get shit out between sobbing to my boyfriend and friends.

I love you, and I feel for you. I hope you’ll stick around.