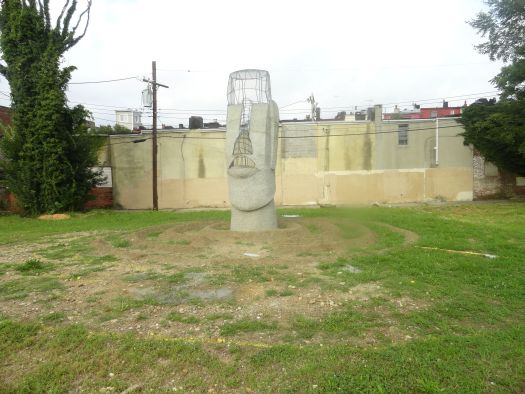 Early in the morning I went to Hampden while they were setting up Honfest. I hung up three disposable cameras for the festival goers to use. After, I stuck some spray painted plates into the dirt in front of a mural (and next to this statue), went to graffiti alley and yarnbombed a pole, then to Mount Vernon to yarnbomb a parking meter. I also put up my first two inspiration boards. I went home, then came back (in the rain!) to get the cameras down. Then I met my high school best friend, Tiffany, at Nacho Mamas for margaritas and Mexican food.
Trip #42: September 15 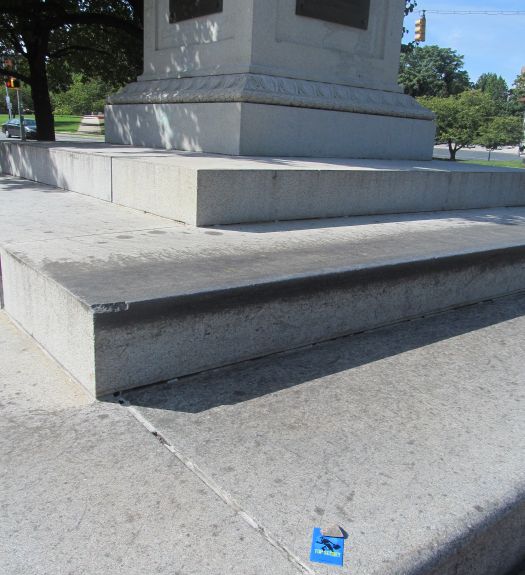 Came to check on my inspiration boards, started leaving my Top Secret Cards around. I left my first glasses case on a bench and left some notes for strangers. I also yarnbombed some cement pillars! 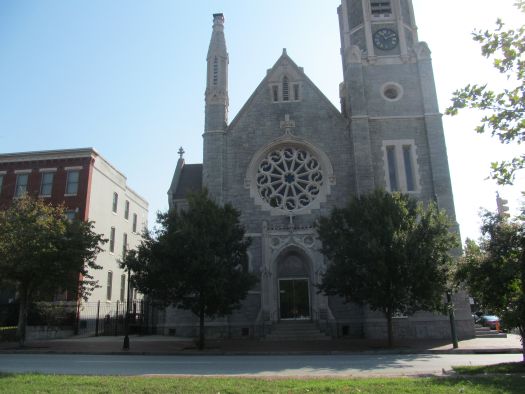 First, I went to graffiti alley and put up a disposable camera to finish off the roll. I took pictures of the Natty Boh/UTZ Girl mural and headed to the Book Thing. I found a Found Magazine book there! I drove down Barclay street, where I put up my Reading Rainbow installation. I put up two mini inspiration boards and left two more glasses cases on benches. Then I sat on a bench in Fells Point and people watched during a Farmers Market while eating a Mexican crepe. 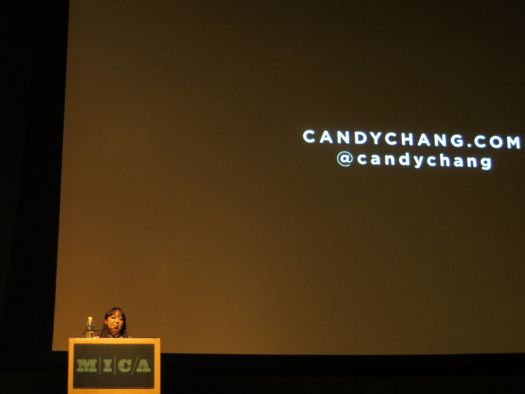 Drove to one of the Mica buildings to see a lecture by Candy Chang. She’s an amazing public artist and I was really lucky to realize she was coming into town! The lecture was free and awesome and I even took notes. I admire her work and life. 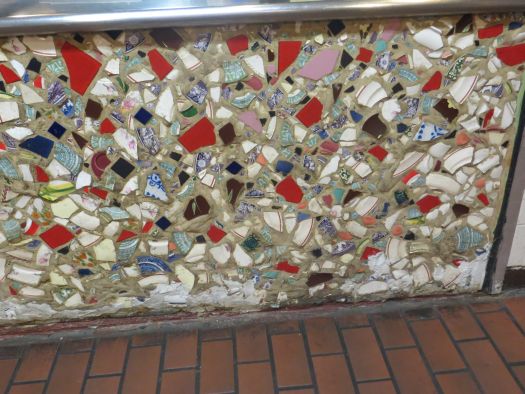 Walked around Federal Hill in the morning. I interacted with a construction worker who was shamelessly hitting on me, but I allowed it because I wanted a picture of him holding a sign and eating 1/4 of a watermelon with one hand. I left my Song Suggestion cards around, some more Top Secret cards, and some notes for strangers. I went to Cross Street Market and got burritos for Matt and I, which I then took to his house. 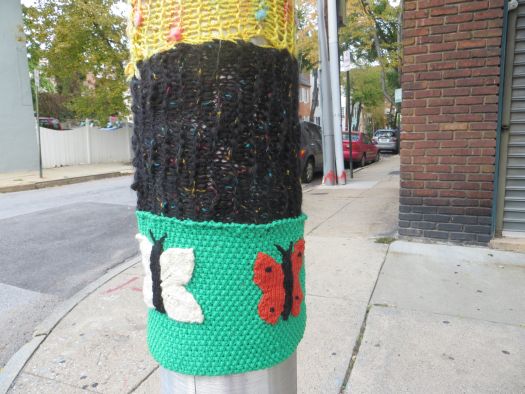 Matt and I took a drive and I saw that there was another addition to my yarnbombing! So exciting. 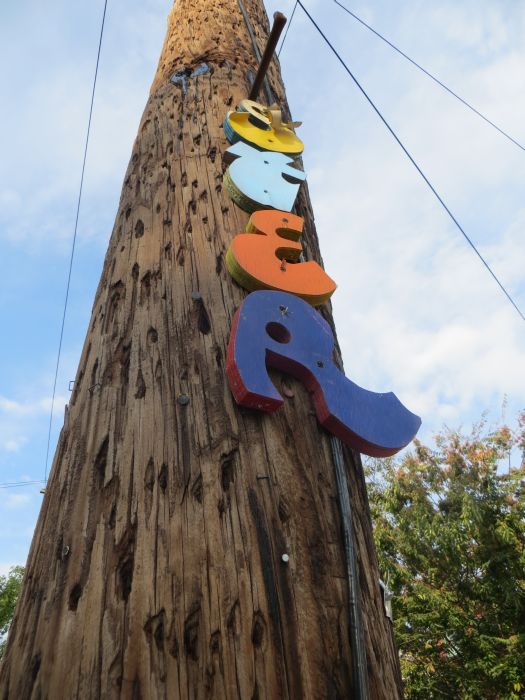 Saturday morning in Hampden. All the Halloween decorations were out! I used up the rest of my supplies, including stickers on the poles and streets. I also put up two purple tubing installations and did A Pin For You. Here is something I found by the park in Hampden. 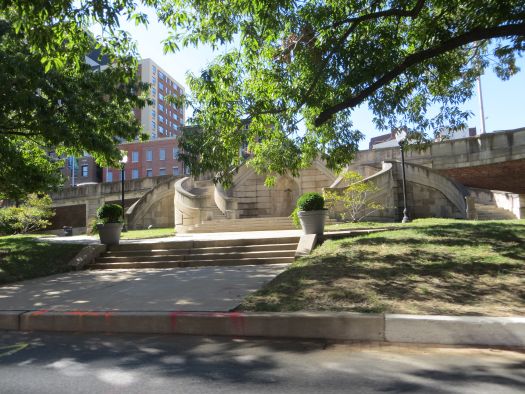 Big day! I did the Autumn Memories Tree and yarnbombed a bench. I also put up an interactive chalkboard and disposable camera as well as another inspiration board. My dad drove me around all day and we got Qdoba for lunch. It was the day of the Baltimore Marathon and there were LOTS of street closures. 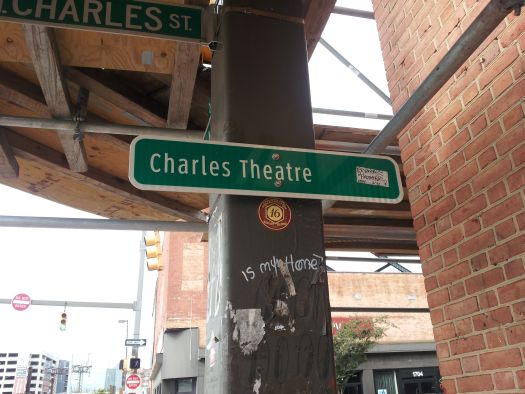 I was hungry so I went to Sofi’s Crepes on Charles Street. I was too early, though, and they weren’t open! I ended up eating food at this Ethiopian restaurant. I had never had that cuisine and it kind of made me sick, but I honestly think it was more psychological than anything else, aka- I’m dumb. I checked on the installations I did the day before and worked on my Side Walks book. 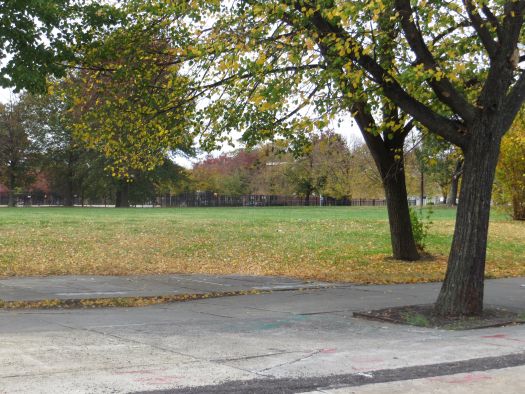 My last trip (out of 50)! I put up my vending machine for the first time at an antique shop in Hampden and some other street art type things that I have yet to blog about. The leaves were at peak changing time and it was before Sandy knocked them all to the ground. It was beautiful.