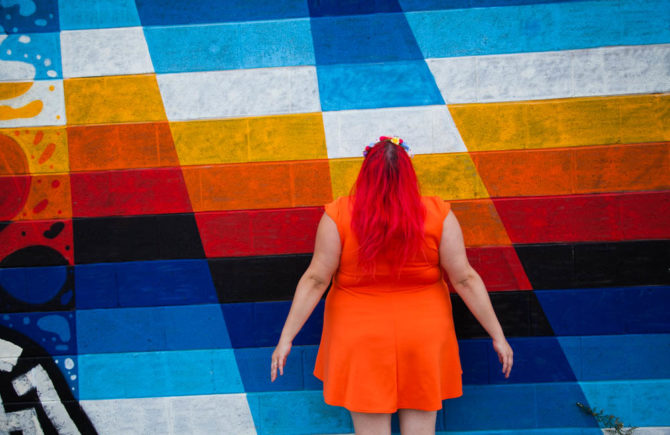 One of my many wonderful gifts from Maura for my 30th birthday was a past life regression hypnosis session. It had been on my Bucket List ever since I found out it was a thing! I had heard of them in passing a long time ago, actually, but it wasn’t until I went to have my aura photographed at Galaxy Hypnosis that I really learned more about it.

My immediate curiosity was with my throat. Ever since I was an infant, I’ve had this thing where I haven’t been able to have the front of my throat touched. Seriously. When I was a baby I had a ring of dirt around my neck because I wouldn’t let anyone bathe me there. And as an adult I refuse to wear choker necklaces, turtle necks, or even put my own hand on my neck. It’s always made me gag or at the very least put me in physical pain that I could never explain.

When Larry started talking about past life regression sessions, I told him I had a hypothesis that something happened to me in a past life with my neck and it transferred over to this life. He said that most times people experience inexplicable chronic physical pain it’s from a past life trauma. I definitely wanted to know what the hell happened to me in a past life, but I was really skeptical about being able to be hypnotized. I told him and he responded, “It’s not your job to be hypnotized. It’s my job to hypnotize you“. And that completely changed my point of view on the entire experience. I knew I was going to do it, I just had to wait till I had enough money to spend on it. Enter darling Maura for my birthday present!

So she and I headed over, said hi to Larry, and then went in a room with his wonderful wife, Sondra, who would be conducting the hypnosis session. We blocked out two hours, and a good portion of that time was actually spent talking in a conscious state about the subconscious. We realized that hypnosis isn’t anything like the movies portray it as. You’re really there (like, present) the whole time. You can go into a trance at points, but for the most part you can still hear stuff in the room and it’s not really a dissociative experience. I thought I needed to get zonked out like… meditate so hard I pass out into a weird state I didn’t know existed. Nope! Not at all.

Hypnosis works with your subconscious which is present with you at all times, she just doesn’t always get to come out to play. The best analogy Sondra gave us for our subconscious for our purposes was when we’re operating on autopilot. Our subconscious has learned rituals and tasks so well that if we need to tune out for a bit, she can take over. Driving a car becomes easier over time because we’re not hyper-vigilant at all times because we learn to become aware of our surroundings naturally. That’s our subconscious. She let’s us get dressed with ease in the morning instead of thinking about every single minute step of the process. She also hears and knows everything we know. She just needs to be welcomed to come out and play.

My first realization was that I’ve always had such a negative association with autopilot. I create guerrilla art with the intent of getting people to pop out of autopilot for a second and become aware of their surroundings. To be fair, I’m more considering the whole mindfulness aspect of it all, but I had never considered that autopilot might have pros and not just cons! Maybe autopilot (our subconscious) is saving us from being exhausted at the end of the day because she’s taking care of a bunch of trivial nonsense we don’t want to have to deal with on top of all the big stuff we have hurled at us anyway. My mind was already blown and we hadn’t even started.

The actual hypnosis portion was nothing like I expected. It was kind of just like a guided meditation. I had expressed my desire to find out more about my throat thing, so Sondra made sure to incorporate that into prompts she spoke to us, but she basically just enabled Maura and I to relax and let our subconscious take over the show. For 75% of it I could hear Sondra speaking and I just felt very relaxed and light. I kept finding my chin drifting towards the ceiling, which is the opposite of what it does when I’m drifting off to sleep and we weren’t sure if that had anything to do with focusing on my throat or not. Anyway, at one point, I started getting this flashing visual and I started paying attention to it instead of Sondra, so I missed a lot of what she was saying towards the end (but I have it recorded, so I can always go back to listen to it)!

The visual was insane. It felt like it was from a movie. I always dream in full vivid color and from a first person point-of-view. In this vision, I went back and forth from point-of-view to third person and the color scheme was very bleak (khaki, olive green, navy, grey). I was in the sky on a military airplane which was clearly marked so I knew it was a Nazi aircraft. The side panel was open, the way it would be if people were prepared to parachute out of it. I was the only person who wasn’t in a Nazi uniform and it was pretty clear that I was Jewish. I was also a man in my mid-twenties. It felt like I had been utilized for a specific talent and something had just gone terribly wrong and now there was a scuffle turning into a fist fight. I fell towards the edge of the plane and out of the open door, but grabbed onto the side. While I was hanging there, a Nazi soldier started strangling my neck.

That’s all I saw. I’m assuming I died immediately after, although I don’t know if I technically would have fallen to my death or was strangled to death and then fell? No clue.

By the time Sondra brought us back to the present moment in the room and she asked us what we experienced, I felt really weird about sharing what happened because as clear as it was it felt too strange to be true. It felt like a movie! It was so intense. But it appears that’s where my throat hang-up comes from.

Want to know the craziest part? After I had that vision, Sondra had me visualize me releasing the lock around my neck, and I half-collapsed in my chair. And now…

I can touch the top part of my throat.

Not the whole thing. The part where my Adam’s Apple would be still hurts (although not as much), but I can absolutely put my hand on the top of my throat towards my chin. It was an immediate response/reaction to the hypnosis. INSANE.

So yeah. It’s cool if you don’t believe any of this and think I’m crazy. But if you’re interested in past life regressions, I recommend them strongly. Hypnosis is in no way as scary as you might think it is. And if you’re in the Baltimore/DC area, I have a great recommendation for who can do your session.

Have you ever done a past life regression hypnosis? Do you have anything you’d want to explore if you did one?