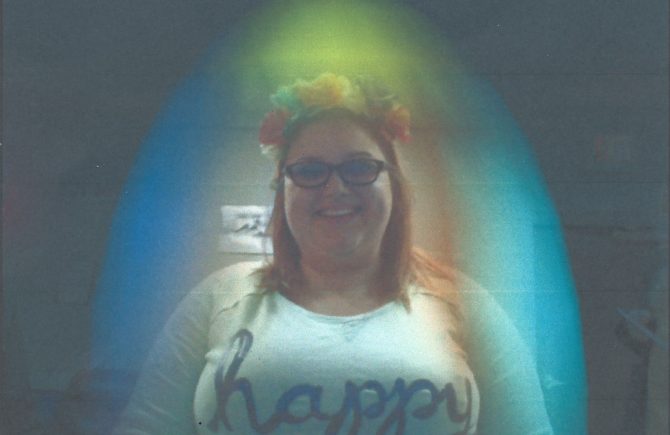 If you’ve paid close attention in the Uncustomary Universe, you’ve become privy to the fact that I can see auras. It wasn’t a thing I was super excited about at first. When I was little I thought it was something everyone saw (the same as my Synesthesia), and as I grew up I learned what auras were but still didn’t decide if that’s what I was seeing or not. I saw color around a person, not usually a cloud of multiple colors like I saw in pictures or people I knew who could see them would describe them to me. Regardless, if that’s what it was, I didn’t want to talk about it or anything else esoteric I was naturally able to do because it reminded me of my mom and I’m pretty scared of turning into her. So I illogically concluded that if I was interested in what she was interested in, and could do what she could do, that I would become her without any say in the matter. That’s not true, though, thank glitter. And auras are awesome.

An aura is an emanation of energy appearing around a person (and technically all living creatures) that some people can see (or have been trained to see). It represents the essence of a person and can give other people an idea of someone else’s feelings, thoughts, fears, health, and more.

In the past year or two, I’ve been more open about my ability to see them. Once friends started finding out they were really fascinated and would ask me what color their’s was and if it ever changed. They’d ask me the next time I saw them if it was the same as the last time I saw them. It didn’t and doesn’t bother me, because I’d be equally fascinated by it. If I could see my own (which I wish so badly I could), I’d be checking it all the time! So I do my best to tell you what I see when we’re in person together. I generally get a color for you as soon as you walk in the door, so that means I can tell if you’re sick, sad, angry, or intoxicated just by the color around you before you say anything. It freaks people out.

Upon further research, I’ve learned that each color represents different personality traits, emotions, and meanings. The thing is, these are all perceptions so no matter if I’m reading a book or a site that looks like it was created with GeoCities, I get varied answers about what each color means. What’s been really validating has been when we look up the person’s color and learn that it’s actually extremely accurate to their personality. Another really validating thing is when my friend, Mike, and I went around a circle of people while camping and said at the same time what color everyone was. We had the same answer around 75-80% of the time. Pretty interesting.

Once I found out there was technology you could use to get a picture of your aura taken, I was all in. I Googled and asked around without luck, until one day I found this one place accidentally called Tranquil Souls! It was only a half hour from my house, and they did aura photography among other metaphysical services and operated under the business Galaxy Hypnosis. I called and spoke with Sondra to make an appointment the week of Aura Awareness Day, so I could make this post for you! Sondra was amazing and genuinely excited about what I was about to experience, even though she had no idea I could see auras myself! I took my friend, Cristen, with me. She’s really interested in all things esoteric as well and was the perfect companion for this journey. Frank, Sondra’s husband, was the one who did our readings and he was amazing. He was extremely charismatic and engaged, making you feel like you were the only person in the room. He told us stories, gave us any information we asked for, and was very open and forthcoming. I’m so glad I got to have that experience with him.

So the way the actual aura photograph works is you take a photo of yourself first, just a regular photo. And you make sure you like your smile in it first (i.e. you can retake it if you want to). That photo is unrelated to your aura. Then you’re going to put your hand on a sensor (it had like three metal circles for each finger and then one for the thumb), put your feet flat on the ground, and he walks you through a guided grounding talk. He instructs you on your breath and shifts your focus from chakra to chakra. At the end he hits “stop collecting data” on the software, and it auto-generates your aura. He tells you to open your eyes and look up at the screen. When I did I jumped back and started kick dancing because ALL I SAW WAS YELLOW! I was ecstatic. He smiled and ushered me back to the chair to zoom out and explain. What I was seeing was the top of my head, not the full body. That was just the beginning of my lesson. So the top of your head (crown) is the way you perceive yourself, the left side of you is the things the universe and your environment brings to you, and the right side is what you’re giving back out to the universe. So for my aura reading, I perceive myself as yellow, the universe is bringing me orange, and I’m giving back out indigo. Makes sense, right? At least for right now. Auras can change moment to moment. I was so excited to tell Frank what his aura was before he told me what it was, and as I was about to ask him he pulled up the software and it had an aura on it already and he said that was him. I said, “DAMNIT!” out loud because I wanted to tell him he was blue and green which is what the software said. But the image I saw had the colors flip-flopped from what I saw and purple on his head, which I didn’t see. He said that was taken a couple hours before and it’s possible that he’s changed since then, but he asked me if I usually see three colors and I said no. I usually see one to two colors and they can change based on the person’s mood, health, and intoxication. He said now that I’m aware there’s three colors I’ll start to see them. It’s been two days and I haven’t started to see them yet, but I really hope that starts to happen.

He also asked me to show him on his body how far his aura goes out and I pointed to about eight inches into the empty space past his shoulder. And he told me his aura is actually almost as big as the room and I was really confused. (Aura size goes from 10-100, mine is 50.) He told me all I’m seeing is the color and not the energy, it’s not just an outline, it’s a whole bubble, and now that I know that I will start to see that as well. It’s SO interesting. If I start to notice either of these things, I will report back ASAP in a Weekly Happiness post.

So yeah, getting a picture of my aura taken was an absolutely amazing experience. Even if you’ve never had your aura read before or you’re kind of skeptical. It’s only $30 at the place I went to, and if you really just want to get in and out of there ASAP, you could easily do the entire thing in 15-20 minutes max. I was in there for ever and ever because I had so many questions, and I’m grateful for his patience with me.

What was extremely helpful was the chakra reading. I wasn’t expecting to care too much about that, but he went through each of my chakras and told me which ones were operating at crazy awesome levels and really unhealthy levels and I was able to agree without a doubt in the areas of which I was neglecting self-care. It was really eye-opening and validating in a backwards way I didn’t expect! If you’re in the Maryland area, you have to go to Tranquil Souls to get your aura photographed. For real. $30? That’s pretty doable. That’s basically just two tickets to a 3D movie. I’d much rather have a photo of my aura and wait for the movie to come out on Netflix, but that might be because 3D movies give me a headache. 😉 I honestly can’t recommend them enough, though. Five out of five auras!

It’s possible you’ll get confused when you go to the location or call to make an appointment because all the aura information is run under a sub/separate business of the overall business. The overarching business is Galaxy Hypnosis, and they offer a wide variety of services including hypnosis and past life regression. But all the information for auras is under Tranquil Souls. It’s all the same location, phone number, and people.

You can go in there and just get a picture taken of your aura and chakras with a print out to take home, which is $30. Add $5 if you want an extra page of the charts blown up. There’s more awesome packages to get, though. For example, you can have your aura and chakras photographed and then have an energy balancing and clearing session and then get another photograph taken and see how you changed in that short of an amount of time! So interesting. They even offer a twenty-three page print out of everything related to your chakras, aura, emotions, and balance for you to take home for an additional fee. To check out all the extra packages go to their site and click on Aura Photography. They, like most people who aren’t obsessed with unusual holidays (AKA just me), didn’t know about Aura Awareness Day. To celebrate they made an event page on Facebook to spread… awareness! Ba dum dum chaaaa (drum sound). If you want me to go with you, send me an e-mail and we’ll organize it! And if you go alone, please tell them I sent you and say hi!