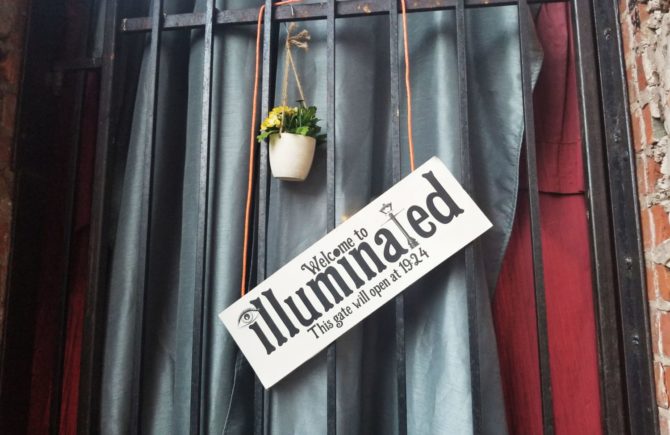 David London, the magician and man behind Baltimore’s Circus Of Wonders, recently started working with The Peale Center in downtown Baltimore and put on one of the most amazing events I’ve ever been to, entitled “Illuminated”, a Surrealist Garden Party. Like all the best events I’ve ever attended, it had a common denominator, April, who was my date for the evening. Usually she’s the one throwing the parties, but that night I got to experience everything with her, and it was extra wonderful. The event was thrown at The Peale Center, which has an incredibly rich history I was unaware of until that evening. It’s the oldest museum building, not just in Baltimore or Maryland… but in the United States! And that’s not all. It was the first public secondary school for African Americans in Baltimore, and it was also used for the Bureau Of Water Supply for decades! The architecture is beautiful, and it has a lot to offer. I recommend a trip if you get a chance! The garden party was starting promptly at 19:24. “Surrealist attire” was strongly encouraged, and goldfish were to be admitted free of charge. April brought along a live goldfish in a bowl, Bob, who was a party hit! We met there in unique outfits of different varieties, and she painted a mustache on me with pink lipstick because guests with mustaches were promised a free gift. (Hindsight: there were so many surprises throughout the night I’m not quite sure if I ever actually got a gift for having a mustache? Hah! David?) People dressed in outfits of crazy kinds stood in an unassuming alley with a door marked “Illuminated”. We were in the right place, and at 7:24 PM we heard a horn go off and David burst through the door in his first of many outfits that evening. He welcomed us in a sporadic, unusual fashion and we checked in using the second letter of our last name. Once approved from the guest list, we passed through the drapery into a literal wonderland that made our wildest dreams come true. There was a woman continually making bubbles with her hands and then lighting them on fire! A man with nothing but neck ties wrapped around his torso hanging out in a tree. A lady ironing quesadillas till they were warm and delicious, with the least amount of wrinkles I’ve ever had in Mexican food. A portrait artist sat all night to create vivid illustrations of the guests that then hung from clips on a wire for us to enjoy. There was a mannequin with random items for us to add as we pleased with hot glue guns. All the while perfect music played in the background to cultivate the ideal surrealist ambiance and David passed out pieces of paper with a number on them and a prompt for us to finish the sentence with. When we were done writing, we gave our paper to “the guy in the tree” and we could bang on his gong with the rubber chicken. April and I made our way inside the museum to get a drink, see what was on display (like a giant clock where every number of the clock was made out of a separate clock), and sneak around to all the floors and check out all the rooms. I did a little jig on the empty stage. When we came back out to the garden area, they were passing out fishbowls identical to the one Bob was living it up in, but these were full of champagne. The girl who had been creating bubble magic earlier came by to drop three red Swedish fish in my champagne glass/fishbowl and I gasped out of confusion because of Bob and exclaimed, “Are these real!?” and she said, “They are real in the way that you can touch and eat them”, and I thought that was the perfect answer for this particular event.

David made one of his dozens of outfit changes after organizing the pieces of paper we had completed earlier and gathered us around for a toast. It was hilarious and you can catch it in the video. April and my contributions are back to back. Can you guess which ones they are? We met up with a French poet who helped us to compose a sonnet by going back and forth with words. You can see him read the finished product in the video. It’s true art. So was the outrageous fortune telling the person with the wine glass glasses gave April. It seemed bleak, but April powered through with optimism.

My favorite part of the evening was probably when the man who earlier was on stilts came out on these unique shoes that are best described as goulashes mixed with accordions called _________. One of them sounded like a baby crying and the other sounded like a cow in distress. They were absurd and hilarious, and made April incredibly happy as the lizard fire dancer slinked around. She was crying out of joy, and I asked if she could wear them. The answer was yes and it was the best thing that could have ever transpired. Everything was caught on video. There’s more I can’t even think of quite honestly. I didn’t want to leave, I know that much. When it was time to leave (at 9:24 PM, obviously), April and I lingered about until wigs started coming off and props started being dismantled. We didn’t want to go back to reality, we weren’t ready. And stepping back into that alley was a harsh dose of reality, I’ll tell you that. So much so that I didn’t even realize my shoes were hurting me the entire evening until we stepped into the alley and two steps onto the dark concrete, I realized my feet had been pinched for hours, but I was in such a state of bliss I was unaware. I think that’s my official endorsement for this event. So surreal, it will take away the pain of truly uncomfortable shoes. David deserves an award for this event, and he hired some truly talented people. I considered trying to go again before it ended, but I think it would have made it less special. It’s given me a craving for whimsy, magic, and surrealism in my daily life that I wasn’t totally aware I was severely lacking. And since last week I’ve been making a genuine effort to add that element back into my life.

Five out of five goldfish.

Ready for some magic?