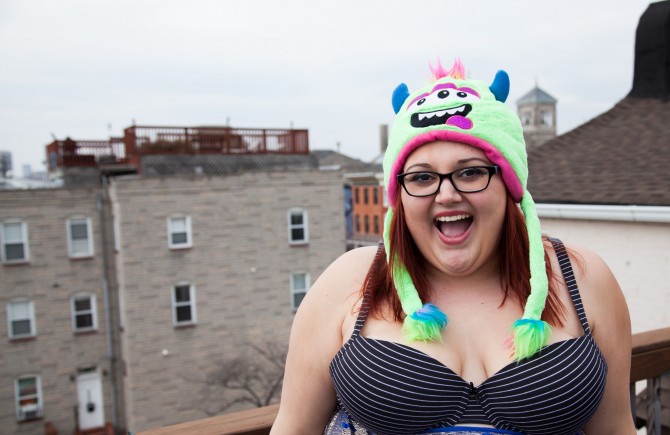 How To Embrace Your Inner Weird

Weird is a strange word. It means something unusual from what we’re familiar with. That means there are an infinite number of kinds of weird. It also means one person’s weird could be another person’s “normal”. I don’t think we need to use weird as a negative term, either. It’s a (subjective) descriptor that indicates our unfamiliarity with something or someone. I think we should celebrate weirdness and take back the word.

I’m weird in a whole lot of ways. I do things like dress up as a 90’s Troll doll and hang out on a bridge, making people dance with me before they pass. I have Synesthesia and can see auras. I’m terrified of insects but feel completely safe in an alley after midnight. I have a bunch of disorders on my psychiatric face sheet.

These things are weird because plenty of other people have never had these experiences or have the exact opposite one(s). As humans, we can have empathy but it’s truly difficult to understand what someone else is going through unless you’ve experienced it firsthand.

For example, when I worked at the psychiatric rehab center, lots of my coworkers were there because they were interested in psychology after having grown up with a family member who had suffered from a mental illness. They understood the symptoms, stigma, and struggle better than someone who was completely removed from the situation, but they hadn’t experienced it firsthand. That’s the difference.

That’s why I can have empathy for someone who is a racial minority and the prejudice and discrimination they’ve experienced, but I can’t truly understand it because it hasn’t happened to me. I can advocate for these issues because I find them important, but that doesn’t mean I really “get it”. It’s always different when things happen to you.

Not experiencing something firsthand doesn’t mean we should turn our backs to it in active ignorance. I know racism is wrong and just because I’ve never experienced it doesn’t mean I won’t fight for equality the same way my coworkers who don’t have a diagnosis on their Axis I will continue to advocate for mental health in politics and fight against stigma because they know it’s an important issue. My point is weird is all over the place. Weird is the way we dress, the way we speak, the way our body looks. Weird is how our brain works, what our preferences are, and how we live. Weird is absolutely everything. Any quality about yourself is likely weird to someone somewhere.

Some things might hit closer to home as being weird because you’ve been made fun of about them. I was bullied and teased growing up for my facial and vocal tics that are a part of my Tourette’s Syndrome. There are famous pop culture pieces about Tourette’s that are actively making fun of the condition that causes distress in so many. You might feel more sensitive about your skin disorder than the color of your hair, you might be more likely to say your weirdness is the fact that you live on the farm over what high school you went to. It’s all weird. We’re all weird.

Being weird is awesome because without differences life would obviously be dull, but it’s more than that. So much of our lives we’re pressured to “fit in” which is especially prevalent in school years, making many kids’ experiences with school an unpleasant one– feeling like an outcast. Fitting in is boring, and you’re so much more than boring. Not to mention if you’re constantly supressing your inner weird and trying to be more like what you think everyone else is, you’ll likely start to feel symptoms of depressions, anxiety, etc.

Not only will you feel less alone and make others feel less alone, but you’ll be able to find people to interact with that totally get where you’re coming from. Fitting in is boring, but going your whole life feeling misunderstood can be lonely. Attract your tribe and figure out the best ways to celebrate your weirdness together. There’s always power in numbers.

I think it’s important to not only embrace our inner weirdness, but to celebrate it. Actually, I think by embracing our weirdness we are celebrating it, but there’s always an extra step you can take in that celebratory stage. Here are five ways you can embrace your inner weird: Question for you in the comments: What’s (at least one of) your weirdness?