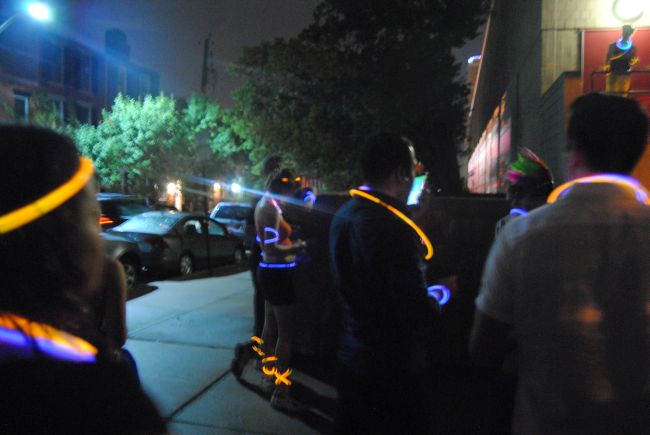 Have you ever been a part of a floating dance party? They’ve been going on for a long time. What The Float hosts these events for people who love to have fun. We all downloaded the same tracks to our iPods and phones, and met in the dark on a humid Saturday evening. We stood there, pumped up, and covered in glow sticks as we listened to the instructions. 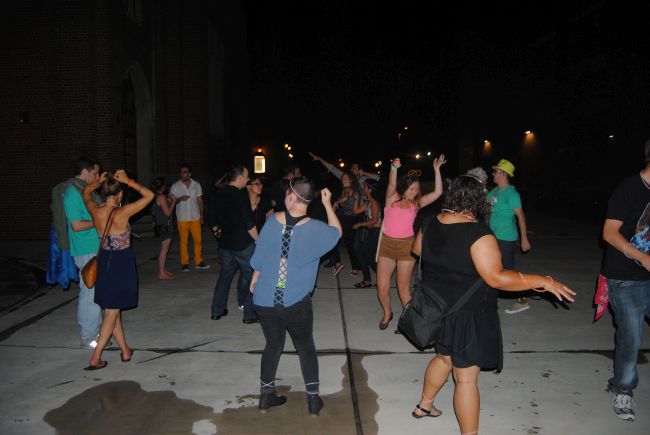 We counted down from 10, and instead of saying zero we yelled “FLOAT!” and pressed play. Our headphones connected us. We were all hearing the same music as we grooved around. We walked down streets, up stairs, across fields. We stopped every few minutes to rally in a group dance party. People hopped up on cement blocks, brick walls, and benches. We linked sweaty arms, climbed on jungle gyms, and saw views of our charmed city. We encircled a fountain that some people dunked their heads in to cool off, got people to join in with us, and even attempted to crash a wedding reception at a museum. We were all over the place. 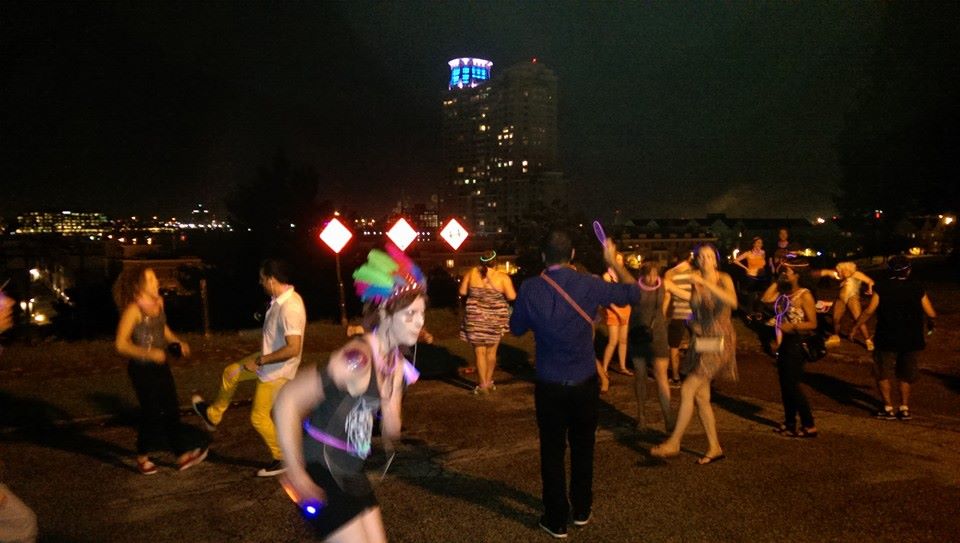 About every half hour we would take a break to hydrate at a local bar. One stop was at a bar in the Inner Harbor, where a two-man band was playing. There were a fair amount of people drinking, but no one was dancing. All thirty of us burst through the doors, wearing bathing suits with images of ice cream cones, Victorian wigs, leg warmers, feathers, and an enormous amount of glow sticks. The singer proclaimed that the party had indeed arrived, and we took a break from dancing on the streets to dance in a bar. 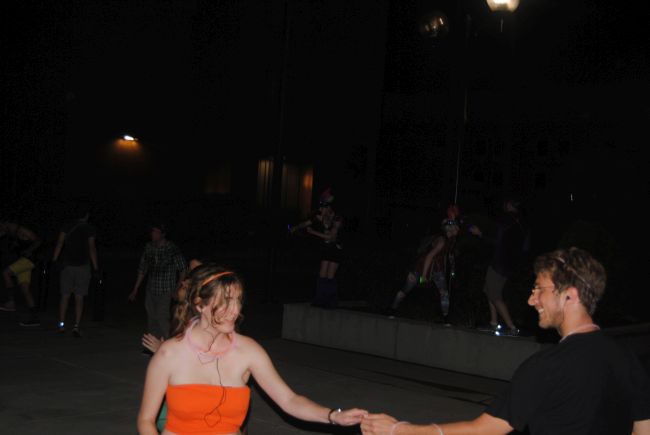 During the first break, I was having a pity party. I was very sad about something and my friend, Ally, reasoned with me not to go home early. She told me that nothing I did that night was going to give me the answer to the thing I was worried about. I could either go home and pout, accomplishing nothing, or I could stay and dance. I’m so glad I stayed and danced. Thank you, Ally. And thank you to Emily for sprinkling confetti from her purse on top of my head. It gave me power. 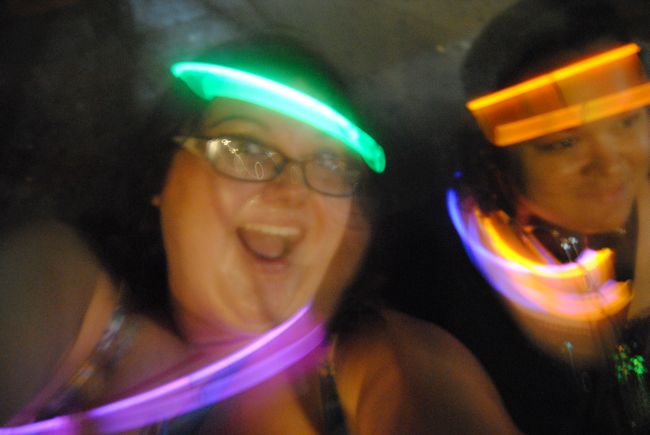 A couple times I took out one of my ear buds, and saw just how strange it looked to everyone else observing us. We were just a crazy group of kids dancing to no music. That’s what it looked like. But the thing is that we made our own fun; and we can make our own music if we need to. I spent the night with strangers who all decided that being a part of a dance flash mob party was better than drinking at the neighborhood bar. I like those kind of people. 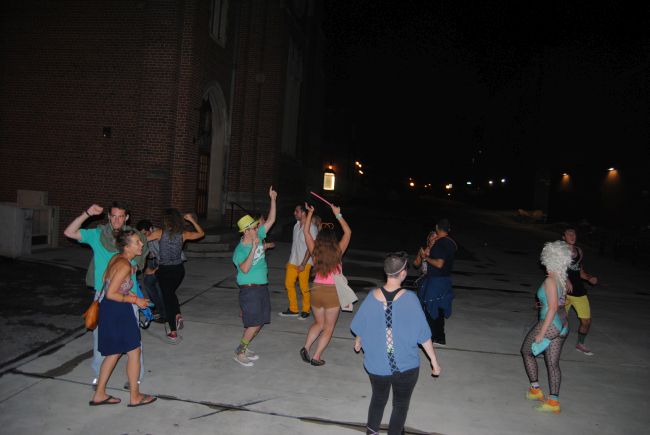 There will be another floating dance party in DC this Saturday. I highly recommend going if you’re available. And if you want to check out the music from our party, you can! I’m really sorry I don’t have many pictures from this wonderful night, but I was too busy enjoying the amazing experience. 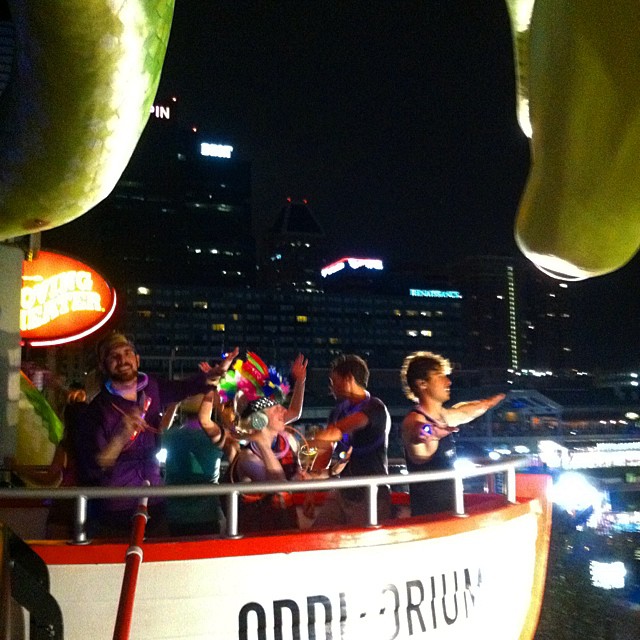 So happy to have been a party of Baltimore’s first floating dance party. Don’t you wish you could have been there?! If you like the concept of people partying in unison to the same audio via headphones, you might also like the MP3 Experiment.