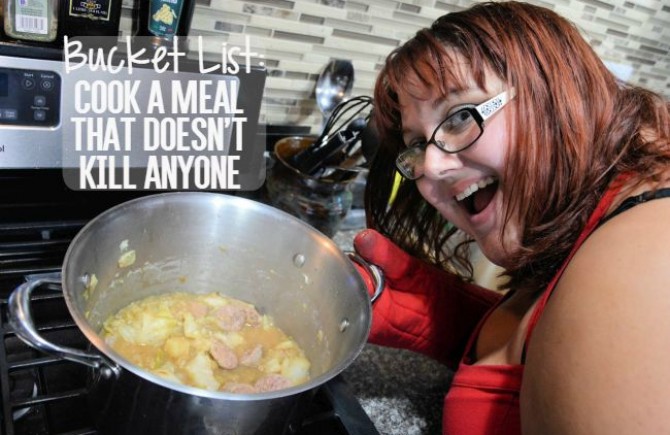 Bucket List: Cook A Meal That Doesn’t Kill Anyone 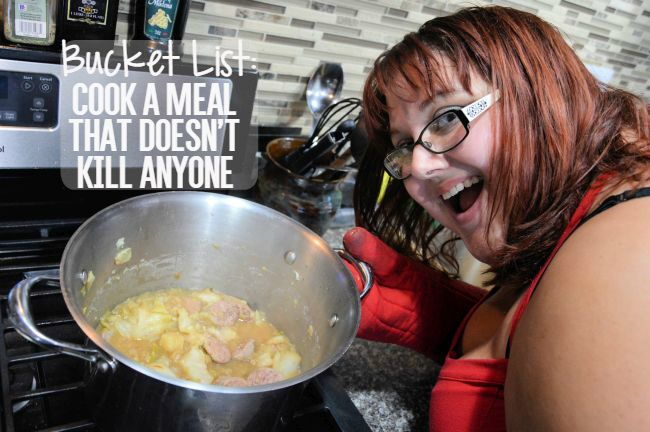 Something on my Bucket List is to “cook a meal that doesn’t kill anyone”. Last month, I teamed up with Allie of Alexandra Rae Designs to do a giveaway meets recipe card challenge. I asked you all to send me in your favorite recipes. I chose two of my favorite cards, and decided to cook one of them as my meal. 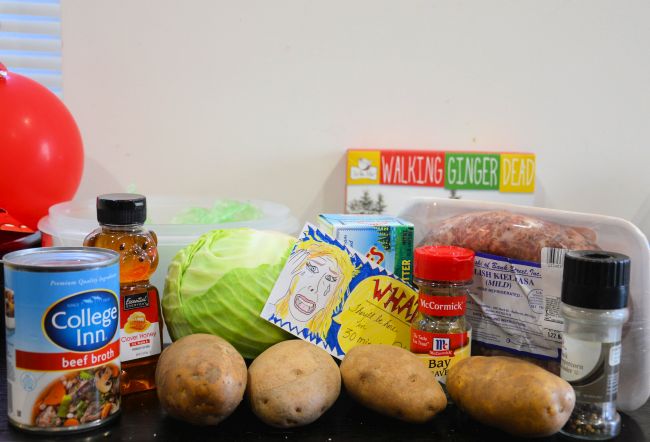 Candace sent me three very cutely decorated recipe cards. Two were for stews, one a bit quicker than the other, and the last was for making a loaf of beer bread. I set off on my journey to cook (and bake) her recipes, and it was quite an experience. 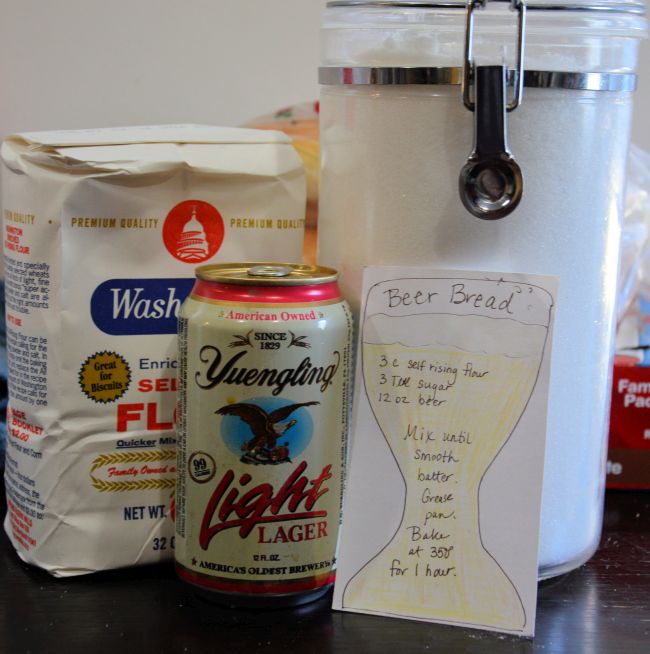 You probably guessed that the reason this was on my bucket list is because I’m not good at cooking. If you did, you’re right. I’m good at a lot of things, but cooking is not one of them! The last time I tried to cook a meal, I served pink chicken and cold corn, getting my then-boyfriend sick. I have broken not one, but four, microwaves, and once I called my friend in a different time zone to ask her how to boil eggs. Joe is a professional chef, and he doesn’t let me anywhere near him in the kitchen. I had asked him to supervise me during this experiment, though. Mostly because I don’t own kitchen tool stuff, and I didn’t want to burn anything down. 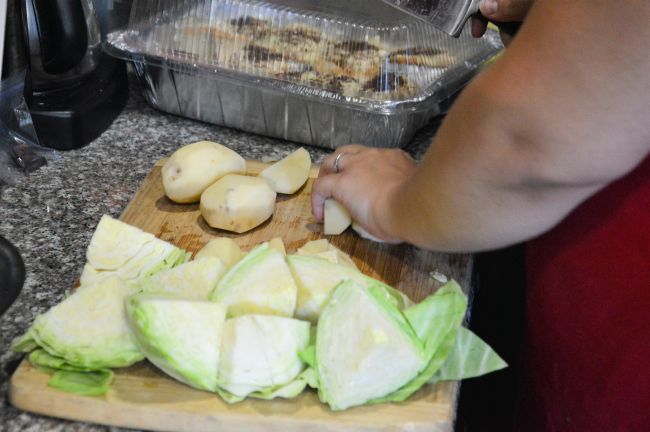 I went to the grocery store, which was an ordeal on its own. Even though I actually had a list, which I never do, I was still running around like a chicken with my head cut off trying to find things. I still don’t know where Shopper’s keeps their honey. I lucked out and found it on an end cap. Apparently you’re supposed to put the heads of cabbage in bags, too. 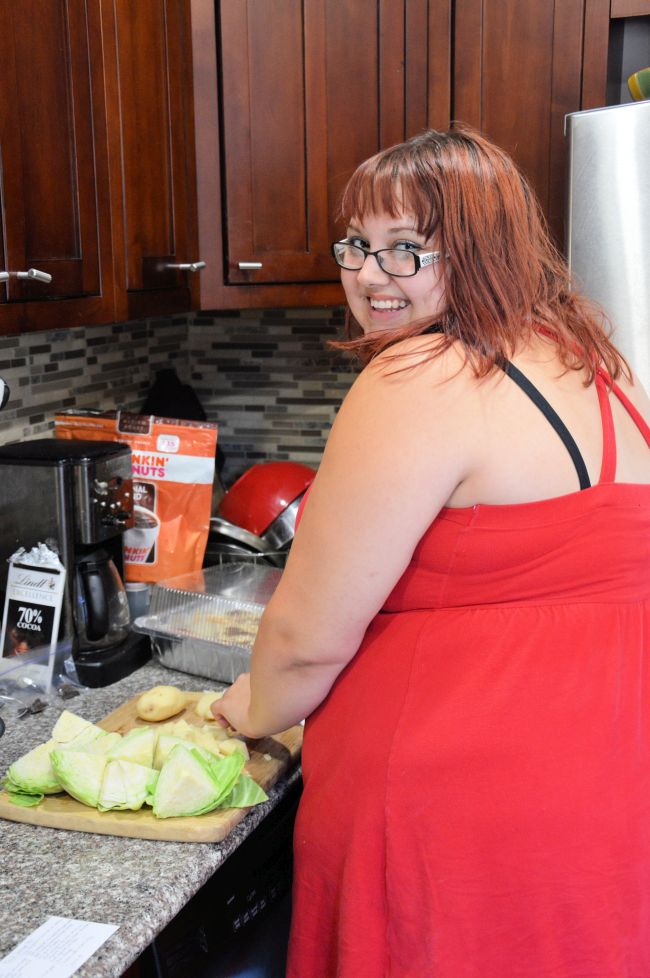 In Joe’s kitchen, I set everything up and Joe reminded me that before I started cutting stuff that I needed ready, I had to heat the oven and spray pans with Pam. Apparently it made more sense to start with the bread, even though that was dessert, because it was going to take longer. That was the easiest part! Beer bread is seriously just flour, beer, and sugar. You mix it up till it’s not chunky anymore and put it in a bread pan (like a super deep rectangular cookie sheet) and put it in the oven for an hour. It tastes good, too! And I think the better beer you use, the better it will taste. Joe made one later with cider that tasted sweet! That was a cool idea, too. 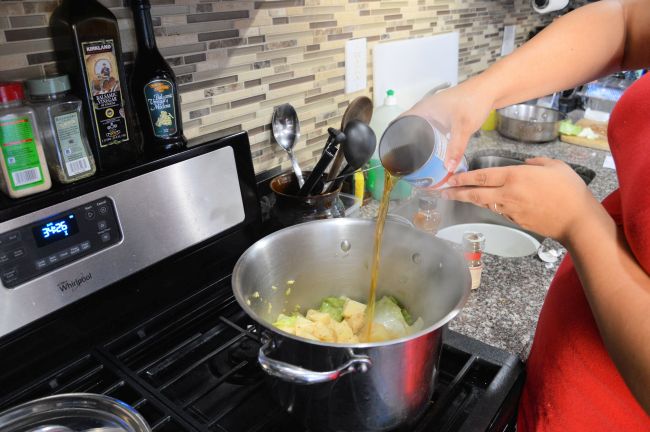 Okay, so the stew required me to chop up cabbage, and I learned how to take off the white chunky stalk part that you don’t want to eat. I learned how to properly peel potatoes and chop them into pieces. I learned the difference between Teaspoons and Tablespoons, and that kielbasa is covered in intestines which looks like a giant disgusting condom. And you don’t take it off! You just throw it in the pot like a heathen. Disgusting. 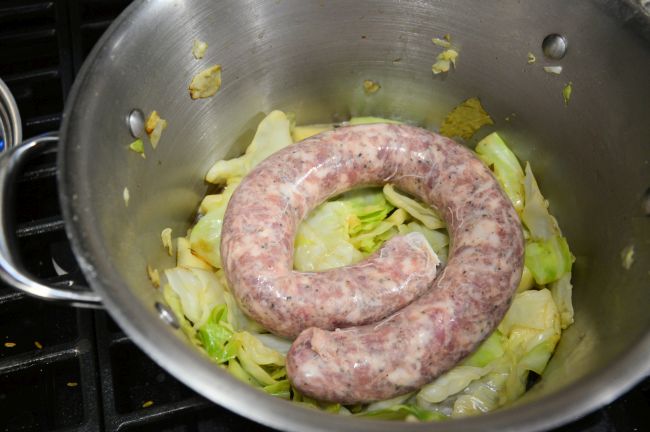 After everything soaked together, there wasn’t too much liquid left, so we added a glass of water to make it more soup-like, and we had to keep coming back to stir it. The pot was super duper hot. I had to have Joe hold the handle with the oven mit while I stirred. 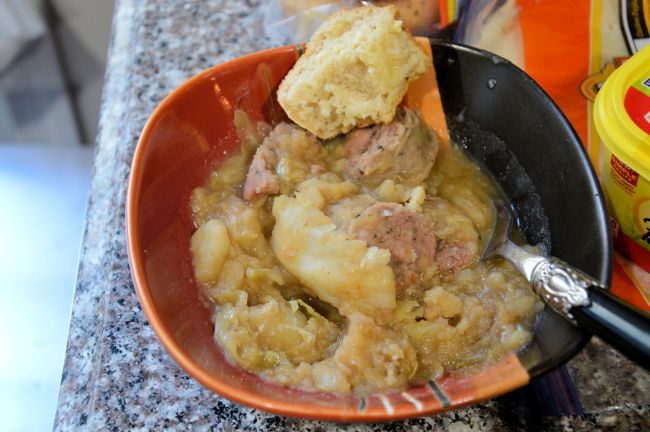 So after everything was done, I ate it and it actually tasted pretty good. Joe doesn’t like cabbage but he tried it, and said it was good. And I fed it to three other people and after an hour everyone was alive and not vomiting, so I decided that the meal was a success! Besides the fact that I didn’t know you weren’t supposed to keep the bay leaf in there. The recipe didn’t specifically say to take it out and I thought it would just dissolve, so sorry that was in your soup, Leigh! But yeah– success! 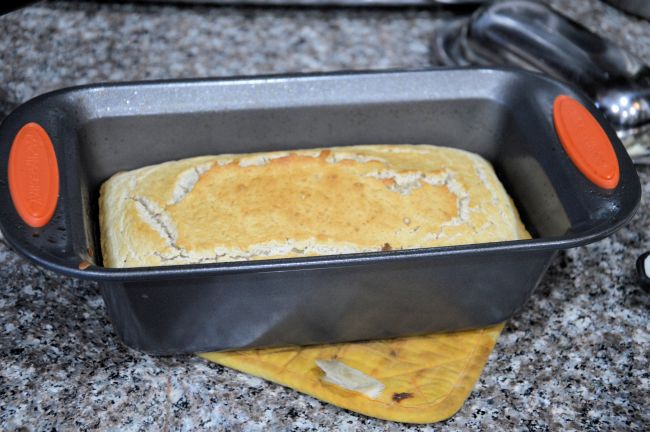 If you’re curious, here are the ingredients for you to make your own (serves four): 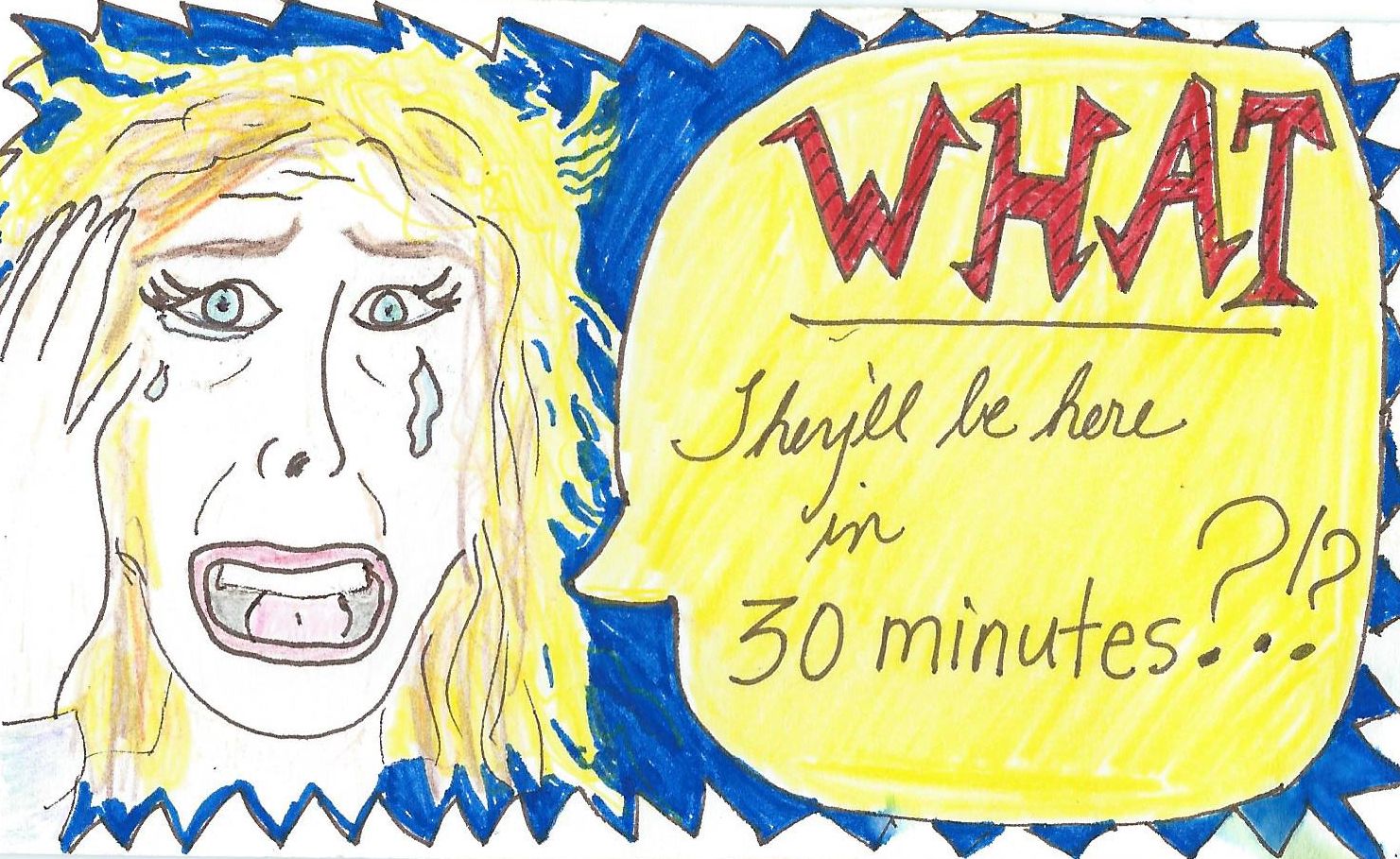 Congratulations again to Candace for winning this challenge, and for sharing her recipe! Alison also won the challenge for the most fun and colorful card. They each won $20 to Alexandra Rae Design’s shop. Thanks to everyone who submitted a recipe card! I’m keeping them on file in case I decide to try cooking (or baking) again. It honestly wasn’t as terrible as I thought it was going to be, and I can kind of see myself trying to do it again in the future, but don’t count on it.

PS – If you could use $45 cash for your next cooking extravaganza, enter this giveaway!