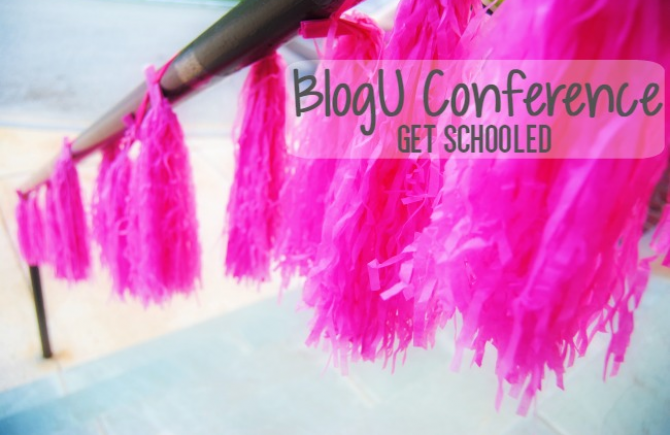 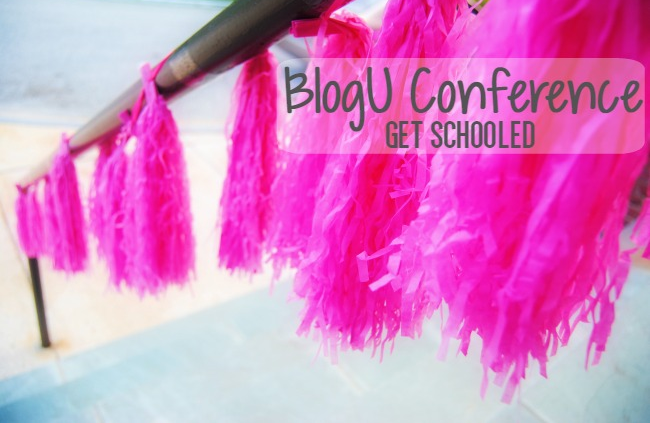 As a blogger, I’m constantly looking for ways to improve my corner of the internet. I do as much research as I can online, but I’m a much better learner in a teacher-student scenario. I’ve paid lots of money to attend blogging workshops and branding seminars, as well as purchasing plenty of one-on-one consultation services. I’ve learned something from each of these, for sure, but I really had no idea how much I could possibly learn in one weekend until I went to BlogU.

Any workshop I’ve ever attended has been out of state, so back in the winter when I was searching for local blogging conferences, I had to blink a few times to realize that there was one right here in Baltimore! I couldn’t believe it (or enter my credit card information quick enough). 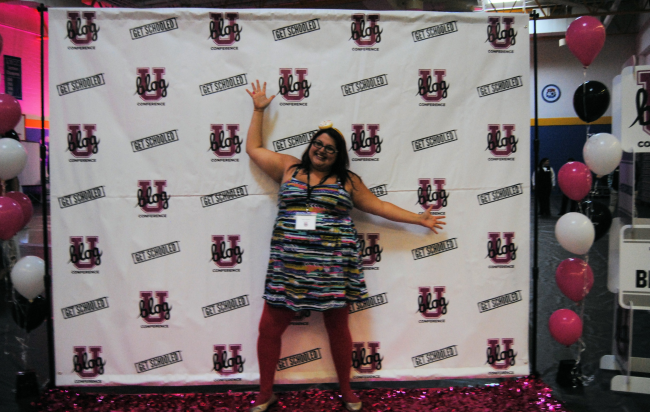 Months passed, and I started to get a little nervous. I realized that most of the bloggers who would be attending and teaching were “Mom Bloggers”, or at least had kids. We all know I don’t have kids, or want them, and I was worried I wouldn’t fit in. I decided it didn’t matter, though, and worst case scenario I’d learn from the classes and nod my way through any impending diaper talk. I couldn’t not go! It was in my backyard! 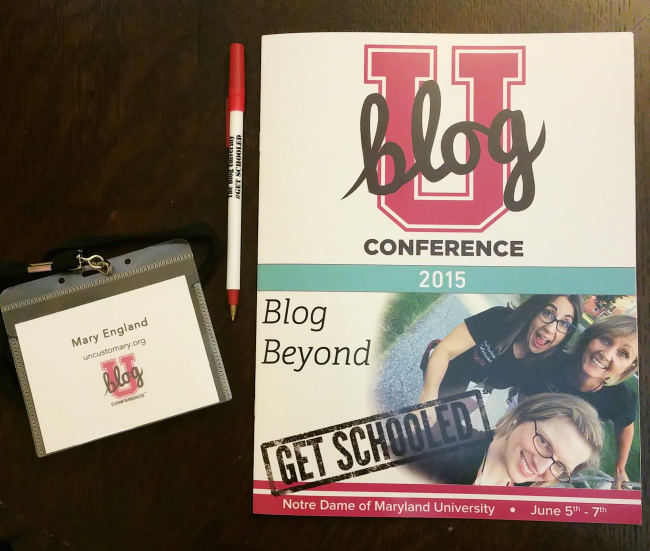 Finally, it was time for me to drive twenty-ish minutes north to sign in and get my name badge and swag bag, full of fun gifts like Boogie Wipes, Downy Wrinkle Releaser, and an emergency phone charger from My Charge. In no time at all, I was making friends with women who had traveled from all over the country to be here with me. I think I may have underestimated the the awesomeness of this conference. People were traveling from Tampa and Seattle… this has gotta be special. And no one even mentioned diapers!

The first evening, I sat down in one of the auditoriums on the Notre Dame Of Maryland University’s campus, where the entire conference is held, and got out my notebook to take notes on the basics of SEO (that’s Search Engine Optimization for you non-bloggers out there). In no time at all, it was time to move on to the next class and I realized that maybe that this one class wasn’t worth the entire cost of my ticket, but it was close!! So much information! It was specific, geared for anyone, and thorough. There were tips and tricks like you’d hope, but also really easy instructions on how to get to where you want to be. Blog workshops I’ve been to before have marketed themselves as something that are great for both beginning and advanced bloggers, and I haven’t found that to be true until BlogU. There was very little that was “beneath” me, and sure lots of the stuff they taught me was overwhelming and over my head, but that’s awesome! I can write that down, have a panic attack, and work on it later.

There were six sessions over two days, and multiple options during each session. It obviously sucked when you wanted to attend two classes that were in the same slot, but that’s really just incentive for me to come back next year (which I will absolutely be doing). The classes I attended were SEO 101, Mastering Pinterest, Metrics, Instagram, Beyond Blogging: How To Make (Real) Money As A Writer, and Build Your Book. I took more notes than I probably did my entire senior year of college, and can’t wait to put my new-found-knowledge to use. 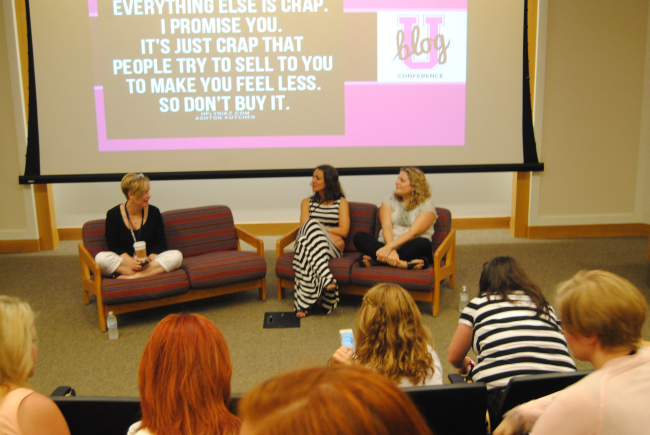 The faculty at BlogU is a wonderful mixture of people who are super duper internet famous and people you might have never heard of before. It’s a great reminder that you don’t need to be able to be recognized on the street in order to be successful in the world of blogging. 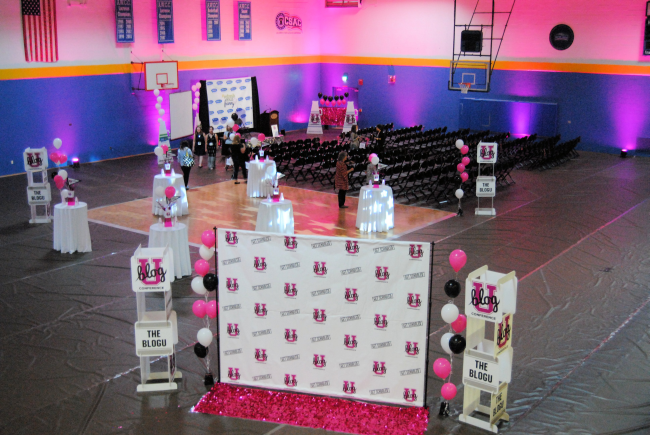 And if the educational aspect of this conference wasn’t enough, they also know how to throw one hell of a party! The first night we had a Pep Rally, complete with the most luxurious photobooth I’ve ever seen, free pom poms to cheer each other on, decadent desserts, free booze, a sequin pink carpet, and severely inspiring words. Four bloggers were surprised to be called to the stage to read one of their previously written posts for the audience, and it was equally emotional and hilarious.

The next night, I actually had to leave early, but Nickelodeon sponsored an awkward Middle School themed party, and judging by the photos, it was an absolute blast. Next year, I’m going to make damn sure I don’t double book myself so I can go to every minute of this conference, even if I don’t stay in the dorms like the out-of-towners. 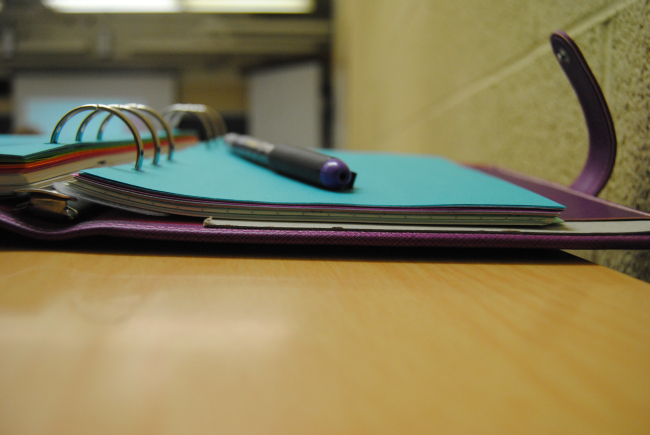 Part of this weekend was learning, part of it was partying, and a lot of it was networking. It didn’t feel like a chore to me, though! Sometimes it sucks to have to be “on” for people all day, especially after only four hours of sleep, but the people I met were just genuinely kind, easy to talk to, and generous. I’m grateful for all the conversations I had, the people who ran up to me to excitedly ask, “Are you Uncustomary?!”, and everyone who put up with the glitter I’m sure they got on themselves after interacting with me. I want to support each and every one of the attendees from this conference, and help them all with their careers! It was a great reminder that helping someone else out doesn’t make you any less important. This is a community based on generosity, and as Nikki Knepper said in her key note speech, “Be generous, fuckers”.

If you’re thinking about going next year, do it. You can learn more on their site or just ask me!