It feels like forever since I’ve shared the beautiful street art I’ve found in Baltimore. I hope you did have a chance to check out Dawn’s tour of Indianapolis, though! She captured some really great installations. Remember that if you’re interested in doing a street art tour of your hometown, you should get in contact with me about a guest post.

One day, I met a blog reader in person, named Kerri. She’s local and her, my friend, Charlotte, and I headed out on the town. We were driving around aimlessly, and spotted this colorful ground mural, so I swerved to the side of the road and parked on North Kenwood so we could go traipse around. The cement pillars enclosing the mural have always been painted, but the grassy area surrounding everything between Kenwood Avenue and Pulaski Highway now have colorful chairs for you to hang out and contemplate life in. 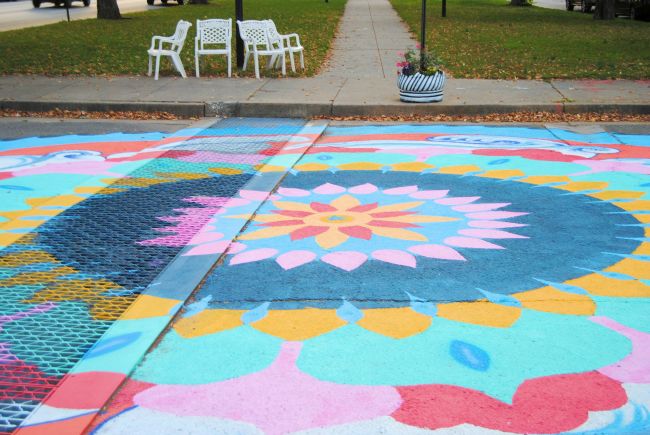 Across the street, a laundromat got in the spirit by painting the side of their building with bubbles. Er, I mean… Kerri blew some giant bubbles! Look! 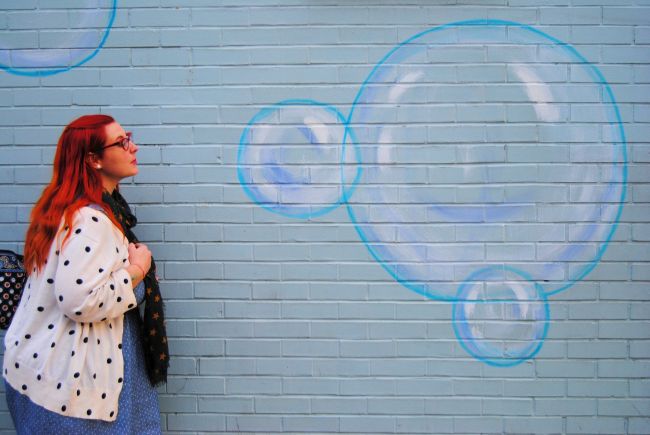 All over town, convenience stores hang up giant Everfresh posters outside their store. I’ve never had any of their juices, but I decided it was time for Charlotte to model them for the internet. 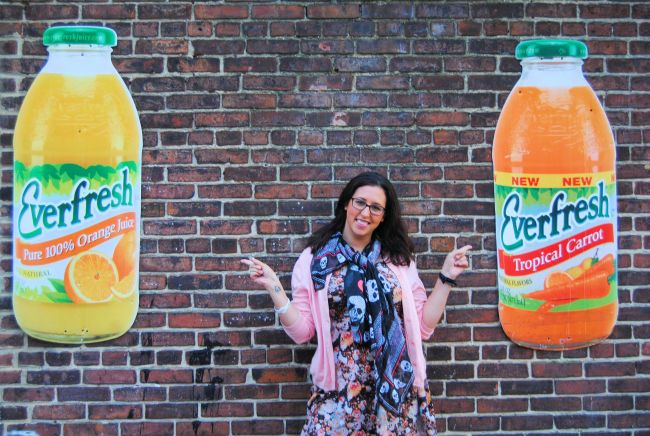 Up a disheveled road in Pigtown that you’re not supposed to drive up (but I did because I like a challenge) is a brick building with this written on the side. Known | Nobody. I liked it a lot, especially with how the bricks change color. Does anyone know this tagger? 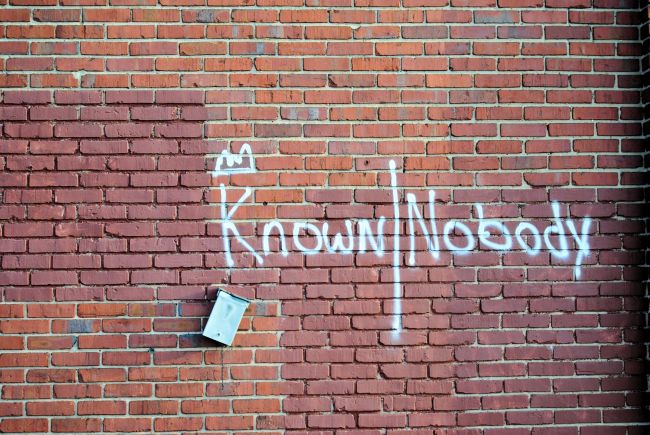 Relatively recently, some giant orange letters have appeared upon entering the city. On the right side of 295 North you see the words “This must be the place” written along the side of a very wide building. It’s almost impossible to photograph it while driving, so I decided to get there on foot. I parked a couple blocks away and walked over to the giant hill alongside the highway. I was wearing flats and only had my camera and keys on me, which I realized, as I repeatedly almost tripped over cement blocks onto broken glass and down a steep hill, that I would be screwed if I needed help. Luckily, everything was fine, and I made it out with just a large amount of grass in my shoes. 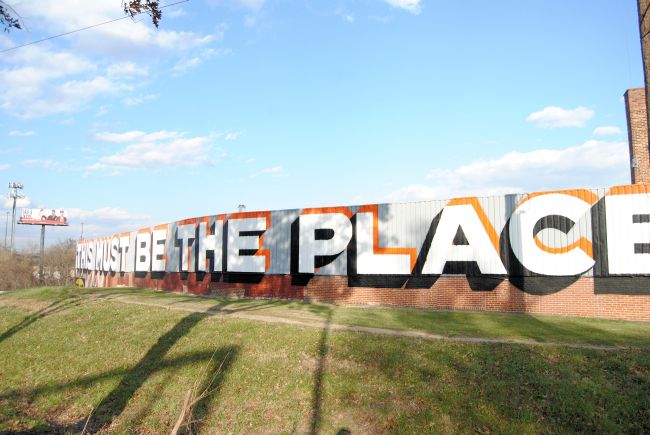 The other set of orange letters is plastered across the Second Chance building that you see as soon as you get off 295 onto Russell Street. I quickly realized that you have to drive about a mile before you are legally allowed to make a left turn if that’s how you enter the city, but after making a (pretty legal) U-turn, I made my way over to the parking lot to take a picture of “What is and what can be”.

The day I first saw them, I Googled it and couldn’t find any information, but based on the font, I figured it was definitely ESPO, otherwise known as Steve Powers, whose Love Letter to Baltimore I documented in the last street art tour I did. It seems these murals are a continuation of his love letter, and I hope he doesn’t stop writing! 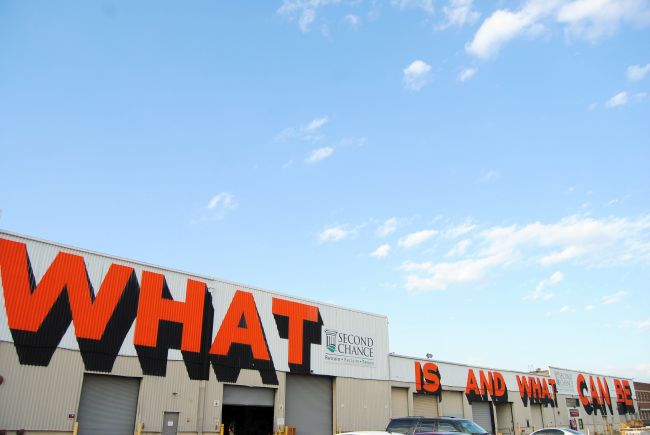 I’ve been hanging out in the southern parts of Baltimore lately, namely Pigtown, which is where I found this beautiful mural with the message “help something grow” on the backside of a pit beef restaurant. building. 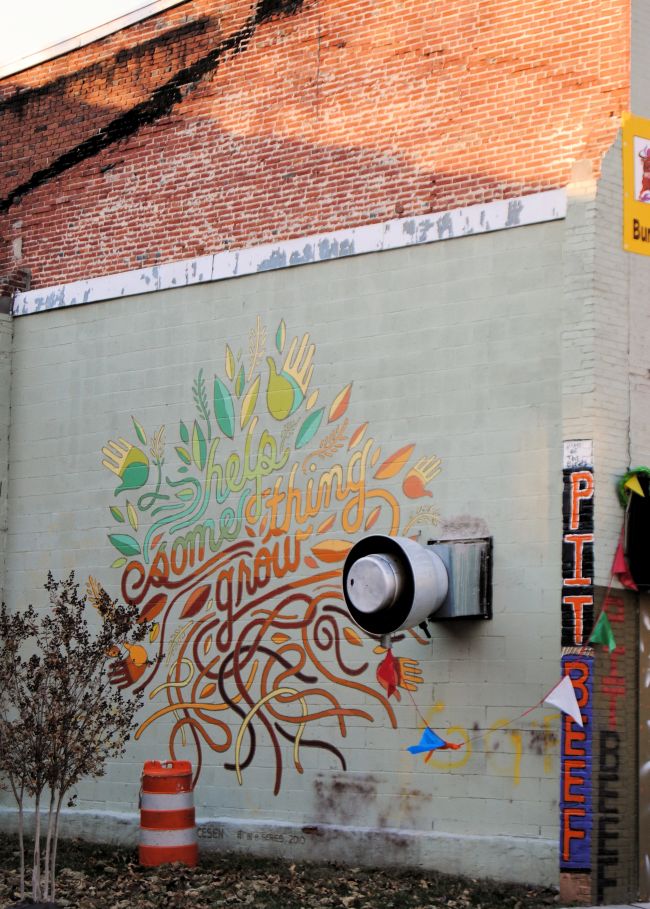 Back behind Hampden, under the overpass of 83, there is an abstract and colorful mural that I finally snagged a picture of. 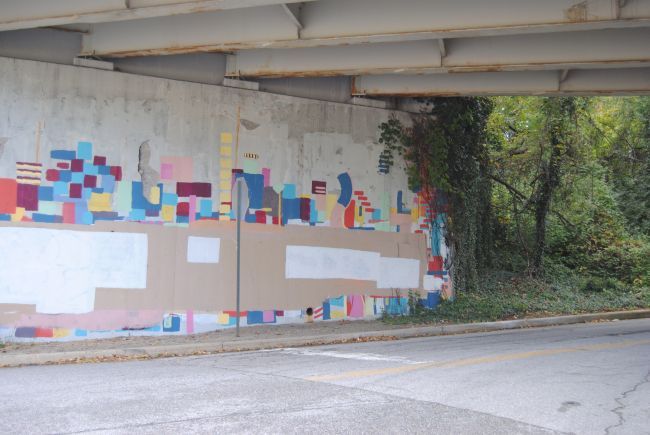 The Baltimore Museum Of Art is celebrating their 100 year anniversary, and I’m thrilled with the way they decorated their stairs in honor of the occasion! So gorgeously bright! Here’s to a hundred more, BMA! 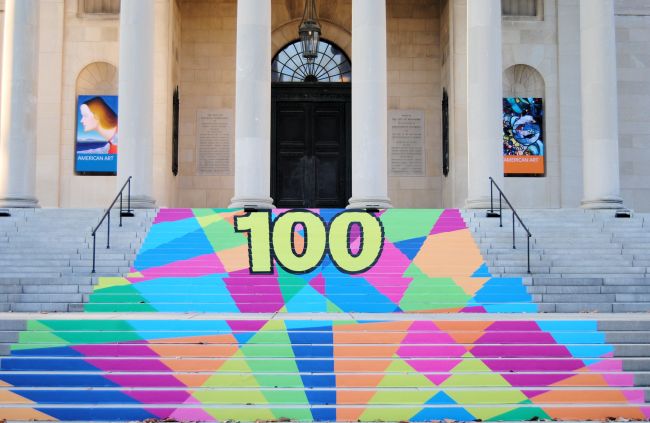 To avoid an accident up north, I took a side street and was surprised by these great mosaic dancers! 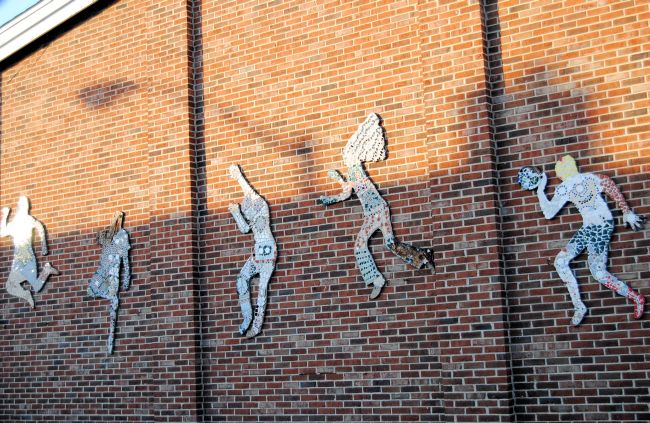 And back down in SoWeBo, near the B&O Railroad Museum and actual train tracks, you’ll find this mural that makes the confusing intersection it opposes a lot less frustrating to get through. I’m becoming extremely infatuated with train travel. Stay tuned. 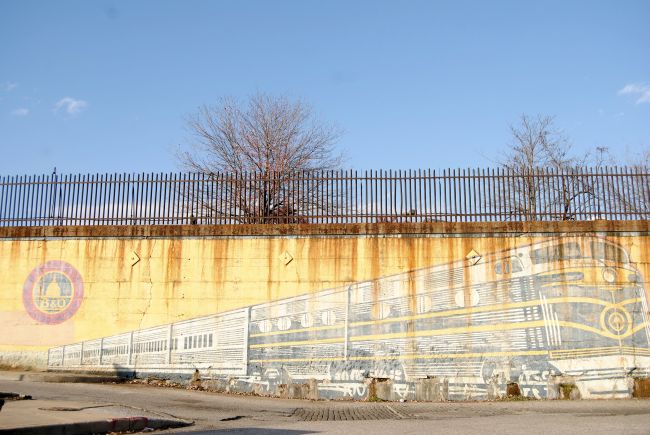