You may have noticed I didn’t give my usual monthly tour of street art this month. The reason for that is our tour is going to be in Indianapolis this time instead. The lovely Dawn, who I was first introduced to through the lovely world of snail mail, has done an absolutely incredible job of not only photographing the public art that beautifies her city, but thoroughly documenting it for your education and enjoyment.

Dawn Olsen is a native Iowan living in downtown Indianapolis. She works as an editorial assistant, freelance writer, and defender of the Oxford comma. She’s addicted to books, snail mail, road trips, and Instagram. She shares creative non-fiction on her blog, Candidly Clyde. 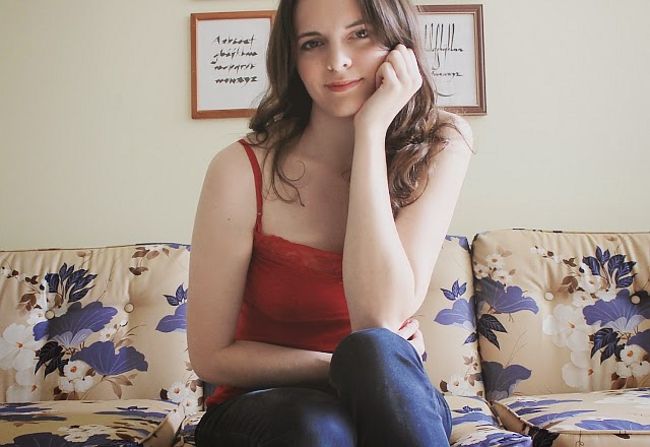 There has always been art in Indianapolis, but, in recent years, various institutions have worked to make the city even more colorful. Art has spilled from galleries and museums and into the streets, parks, and cultural districts of Indy. Public art is found on the sides of historic buildings, on the walls of underpasses, and on the most unexpected corners. There are sculptures, murals, benches, beautified bus stops, and interactive pieces that invite passerby to “pause and find joy in a moment of comic relief.” With so much creativity on every block, it’s easy to get swept into the color and the meaning of each installation. Here are five of my favorite public art pieces in Indianapolis. 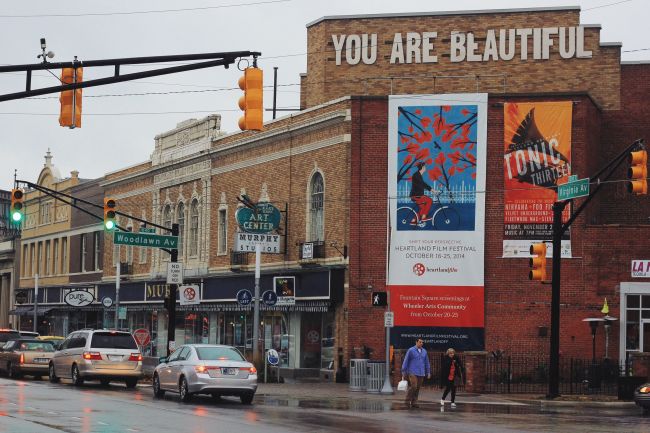 You Are Beautiful was installed in historic Fountain Square in 2007. The installation was a collaboration between the Department of Public Words (DPW), an Indianapolis-based organization, and You Are Beautiful, a movement that encourages positive words and powerful messages. Unfortunately, the plywood letters were badly damaged after last year’s cruel winter, and the installation was removed due to safety concerns. However, DPW plans to reinstall You Are Beautiful using more permanent materials. As a way to raise funds for the project, DPW is selling holiday cards featuring a photo taken last winter. I truly hope DPW collects enough donations; You Are Beautiful is an iconic piece of art in Indianapolis, and it saddens me that the wall on which the installation once hung is now so bare. Every day, everyone deserves to be told that they are beautiful. 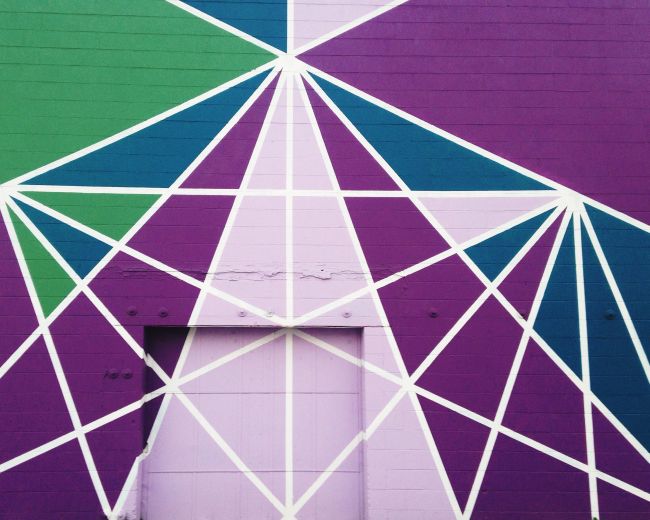 Murals. Indy’s got a lot of ’em. My favorite mural is Stargaze, which is located at the northwest corner of South and Delaware streets. It was designed by Jose Di Gregorio and Andy Fry and was painted last October by volunteers from City Way and Eli Lilly & Co. I love Stargaze‘s vivid colors and sharp lines, especially since I consider triangles to be close, personal friends of mine. If ever you find yourself in front of Stargaze, snap a photo of it; the mural has its own hashtag on Instagram: #thatindymural. 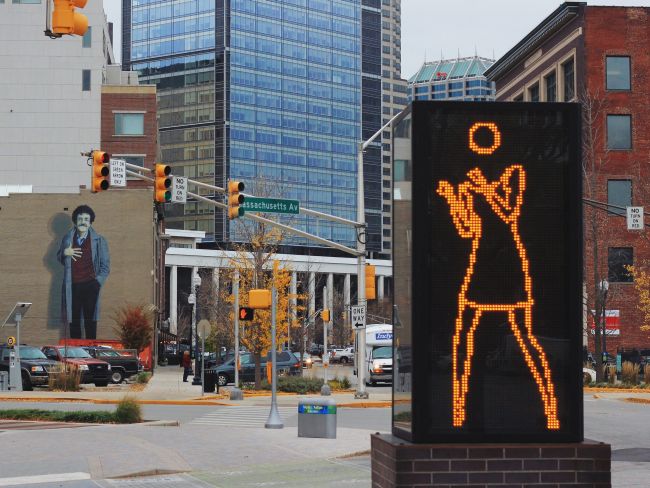 Rain, sleet, snow, hail, and literal cats and dogs could all be falling from the sky and it wouldn’t matter; Ann would keep swinging her hips. Ann Dancing is a 4-sided LED “column” that features a faceless woman who dances the nights (and days) away. The piece was created in 2007 by artist Julian Opie, and originally was part of a temporary exhibition. Now, Ann lights up one of Massachusetts Avenue’s jazziest intersections (note the Kurt Vonnegut mural in the background). Ann even has her own parody Twitter account. (She’s a sassy gal.) 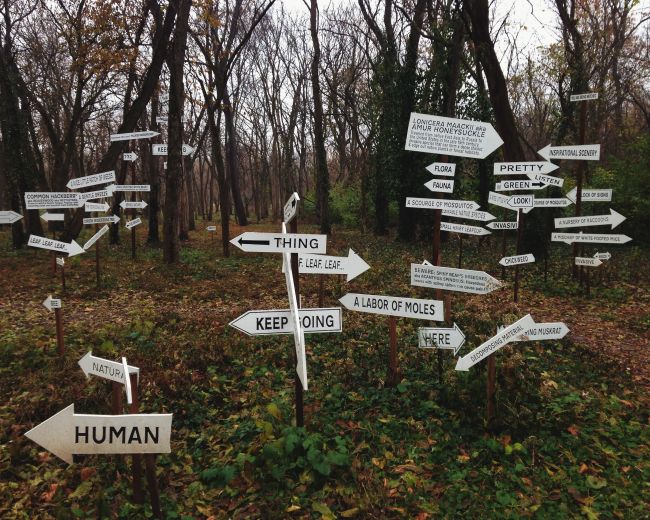 Known colloquially as “100 Acres,” the Virginia B. Fairbanks Art & Nature Park is one of the largest museum art parks in the country. It is adjacent to the Indianapolis Museum of Art (IMA) and features several ongoing commissions, including Kim Beck’s NOTICE: A Flock of Signs. The clusters of signs are scattered around the park and have become one of the most-photographed installations. I love them because they are whimsical and perplexing. Plus, the signs say things such as, “Happy Tree” and “Invasive Human” and “Thing.” A Flock of Signs isn’t the only well-known installation at 100 Acres, however. Funky Bones, for instance, was featured in John Green’s The Fault in Our Stars. As you can imagine, the site is often visited by TFIOS fans who recreate Augustus and Hazel’s picnic. Okay? Okay. 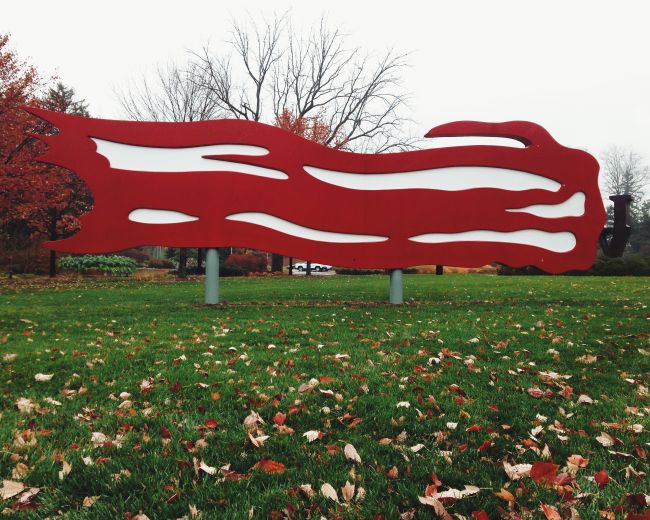 Roy Lichtenstein’s Five Brushstrokes is located on the lawn in front of the IMA. Though Five Brushstrokes originally was commissioned in the 1980s, it was not installed at the IMA until this past summer. The installation consists of five separate structures, the tallest being 40 feet. And while this installation is an excellent example of pop art, one “brushstroke” looks suspiciously like bacon. (And I don’t argue with bacon.)

I really hope that the project receives enough funding to re-install the You Are Beautiful piece! How amazing is that one? I also hope that you enjoyed this tour of Indianapolis’ street art. If you’re interested in doing a tour of your city’s street art for a guest post on Uncustomary Art, please e-mail me. Otherwise, go check out Dawn on Instagram and her blog and tell her Uncustomary sent you!