Whenever someone used to bring up altars, I’d kind of let my eyes gloss over. In my mind they were small tables you prayed in front of that held religious objects, and as someone who doesn’t partake in any kind of organized religion, I assumed they had no place in my life, so I moved on from the topic entirely.

Within the past year, I’ve realized that altars don’t need to be a place where you store holy books and religious parephranalia. It’s actually a space for anything you want, anything you find significant. Once I wrapped my head around that, I decided I would make one, but never did.

Then one day recently, I received a package n the mail that I referenced in this Monthly Mailings post. Michelle had made one of my favorite songs come to life in a tangible way and sent it to the treasure chest that is my PO Box. Receiving it was a spiritual experience, and I suddenly knew that this was going to be the start of my altar, or at least the inspiration for the beginning of mine. 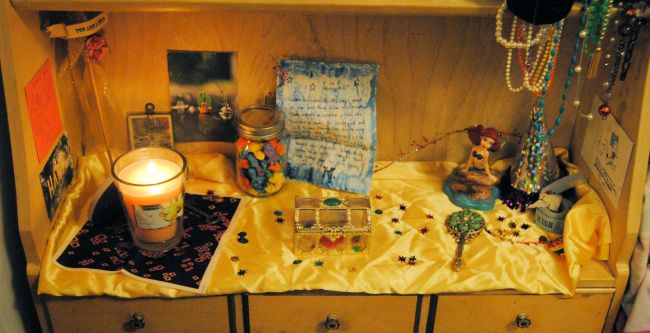 I collected items that mean something to me, and moved them over to a shelf that I’m realizing was specifically made for this. I laid down a piece of satin yellow fabric, and started to scatter and tape up these little treasures I’ve slowly accumulated. 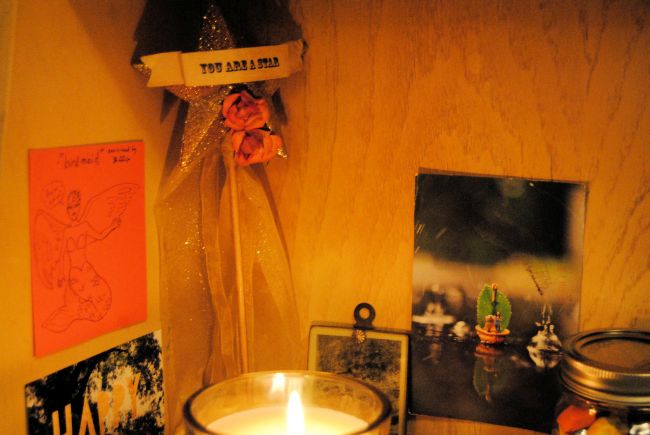 A gold glittery magic wand, reminding me I am a star

A picture of my grandmother from the early 1930’s

A drawing from Olivia of my spirit animal (a birdmaid, — bird + mermaid hybrid)

A photograph-turned-postcard of Carly and Silkworm, taking a boat ride in a rain puddle

A small gold plastic treasure chest, containing a small padded heart I stole from Build-A-Bear as a teenager after I decided that I would store my emotions inside of it

A figurine of Ariel in my favorite moment of “The Little Mermaid”, that my tatto is inspired by

A sparkly tinsel party hat, reminding me to celebrate life

A tiny hand mirror from the 40’s

A postcard from Michelle’s birthday trip, from a project that made me cry it was so beautiful

A super old and chipping brooch of a hot air balloon

A swatch from April’s business, Prillamena, reminding me to go after what I want 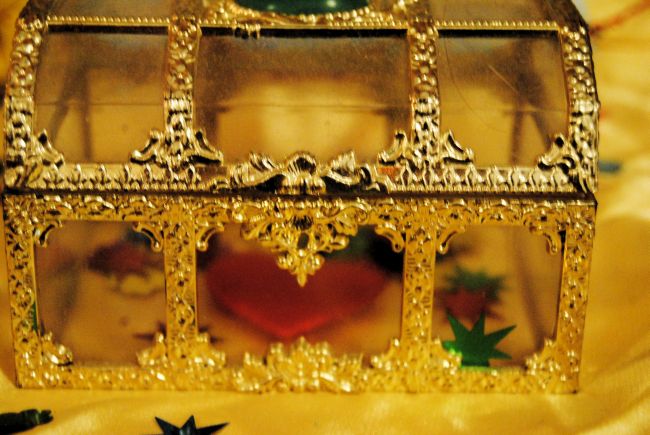 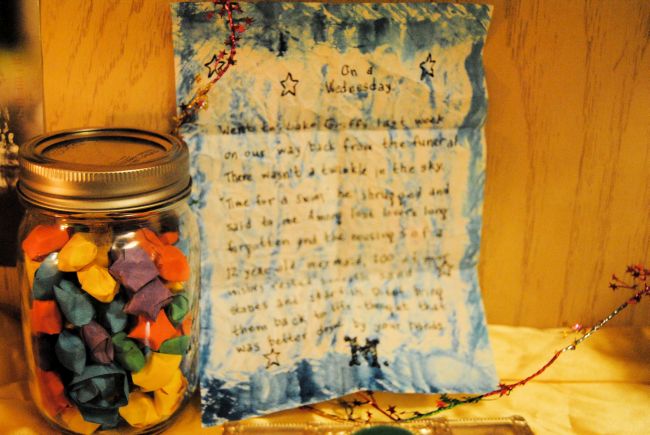 When I was finished placing everything the way I wanted it, I symbolically kneeled to light the candle and sprinkle confetti around. It was a beautiful moment. Now, every time I light the candle, I feel the energy from these special objects. 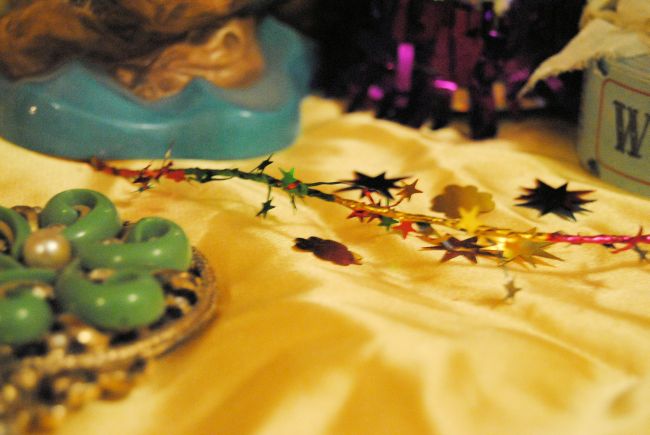 My suggestions for making your own altar:

Don’t be intimidated by the idea that it needs to be religious, anything that is special to you is fair game

Have some sort of starting ritual, sending energy into the objects

Include something that is or can be active/alive, like a candle, plant, fountain, etc.

Figure out if you want some sort of aesthetic focal point

Make the size work for you; it can be as small as an Altoid tin or as big as an entire tabletop

Think about what you’re going to use your altar for, and if you’re going to be meditating or performing rituals in front of it, include adequate space and seating in your planning and decorating

Do you have your own altar? Have you ever thought of making one? What would you put on it?