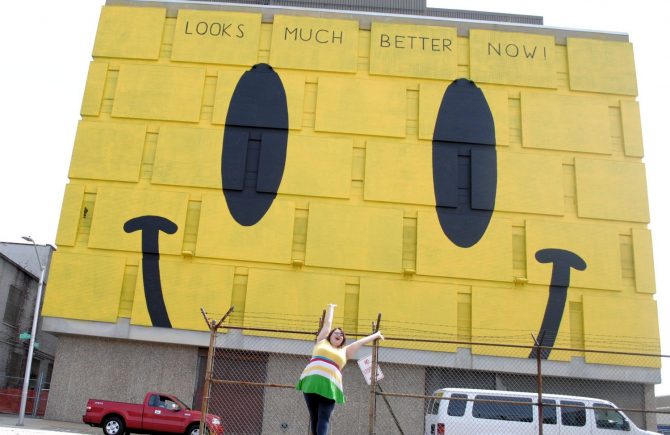 World Art Day is April 15th, and I thought it would be fun to celebrate with a street art tour around the globe! I contacted people in different cities, countries, and continents to share their favorite piece of street art with me.

City: Portland, Oregon
Submitted by: Gwenn Seemel
Comments: “This is a memorial for Kirk Reeves, a street performer from Portland, Oregon. When he passed away in 2012, he left a big hole in the Rose City’s weird art heart, and the mural was the best way I knew to honor him.” City: San Francisco, California
Submitted by: GinaVisione
Comments: “I love the dark (building paint) background with all the bright colors and bronze-outlined details.  The transparent armadillo is almost secretive or ghostly!” City: Berlin Germany / Miami, Floria
Submitted by: Aminta Online
Comments: “Actually this is a collage I made of myself with this mural from Berlin! I don’t normally get into political issues, but this was brilliant.” City: Arlington, Virginia
Submitted by: Kelsey McEvoy
Comments: “This photo was taken of me (pink tank) and my girlfriend, Shannon (blue tee), at the Crystal City Shops in Crystal City (Arlington), Virginia last April after we’d finished running a race through the city. I love this particular section of the full-block-length mural for its color and geometric patterns, but I love the mural in its entirety because it promotes a healthy, active, fresh lifestyle.” City: New York City, New York
Submitted by: Sara Strauss
Comments: “There’s a ton of street art in NYC, but the work of Banksy is so striking! I love this one in particular because you can choose to think it means whatever you want and because I searched for it, walking from street to street, with a friend of mine while she was visiting the city.” City: Berlin, Germany
Submitted by: Caylee Grey
Comments: “Berlin is by far my favourite city for street art. Even the paper advertising is a work of word art. Asking me to choose my favourite from there is like choosing a favourite baby. My favourite artists who have work in Berlin are Urben, ROA, Dal, and Blu. Blu especially, since he totally painted over the most famous piece of his in Berlin. I’ll share with my most Mary piece of street art I’ve seen. It arrived after walking for way too long and getting lost and almost missing the concert we were going to that day. It was on a fence around a park and totally unexpected. And through my sweat, my sore feet, and my irritation, it made me smile. “ City: Honolulu, Hawaii
Submitted by: Jason Denney
Comments: “Saw this in a walk around the BoxJelly coworking space in Honolulu.” City: Columbus, Ohio
Submitted by: Nikki Dee
Comments: “Columbus is my new city and it’s a really creative place. The most recognizable piece of street art is probably the upside-down “American Gothic” that’s painted onto the side of a building in the Short North district of the city, but my favorite is probably the piece called “Daughter of Midas” by Brian Port. It’s so romantic and mermaid-y and lends a gorgeous feminine water energy to a busy street.” City: London, UK
Submitted by: Sarah Starrs
Comments: “I love the cheeky “Adore and Endure Each Other” mural by Stephen Powers in Shoreditch, East London. It’s such a playful, whimsical reminder to love and appreciate the people in our lives through good times and bad.” City: Berkely, California
Submitted by: Elba Valverde
Comments: “Good Fortune, a glass mosaic on cement board by Diana Maria Rossi, installed in 2002. It’s located on Addison Street, Berkeley, California. It caught my attention when I got closer and saw all the details. The glass little mosaic pieces and pennies with photographs of children that represent a multicultural spirit and the idea of a better and more diverse world.” City: North Hobart, Tasmania, Australia
Submitted by: Bianca Jagoe
Comments: “The mural is in North Hobart, Tasmania and my friend and I spotted it recently and couldn’t resist standing in front of it for a cute shot each. It is like a big clever collage full of fun pop culture references (our ex prime minister’s face features on it). Unfortunately I don’t know who the artist is (or if there were multiple artists). There is some great street art in Tasmania and there seems to be an appreciation for it as local councils often commission work. There are a series of traffic light control boxes in Hobart and Launceston that have been hand painted by various artists (I painted one too and am waiting for it to be installed).” City: Baltimore, Maryland
Submitted by: Me
Comments: There are some seriously colorful and elaborate murals in Baltimore, especially after the Open Walls Project that happened for two years. This smiley face mural, however, is probably my favorite. It’s simple, and you can’t not smile when you look at its brightness. It doesn’t take much to make something better.