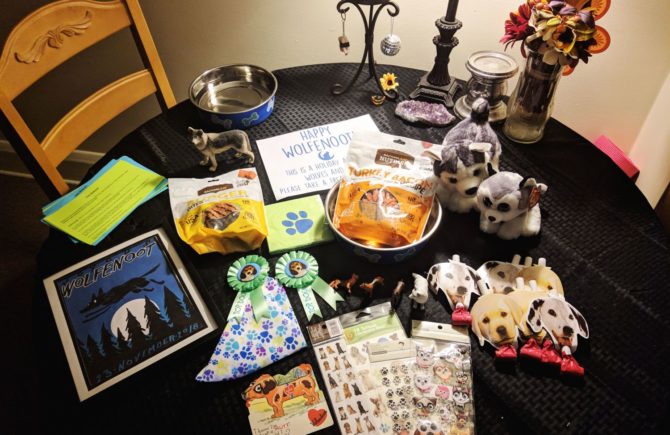 When I first heard about Wolfenoot, I was immediately down, and apparently so was a lot of the world because a seven-year-old from New Zealand’s idea that his mom happened to post about on social media went crazy viral! Are you unfamiliar with Wolfenoot? Let’s take a look at the original post:

“My son has invented a holiday called Wolfenoot.

It is when the Spirit of the Wolf brings and hides small gifts around the house for everyone. People who have, have had, or are kind to dogs get better gifts than anyone else.

You eat roast meat (because wolves eat meat) and cake decorated like a full moon.

A holiday to the spirit of wolves that celebrates people who are kind to dogs? I can 100% get behind this. So we will be celebrating Wolfenoot. It’s on the 23rd November if anyone else is moved to celebrate it. 😉 If you do, please post pics, so he can see how his idea has spread.

If you’re posting publicly about it, use #Wolfenoot.”

To recap, it’s all about celebrating dogs (and wolves), and part of this celebration includes traditions like hiding gifts around the house, baking a full moon cake, and roasting a meat. It also happened to fall on the (Gemini) Full Moon, which gave it an extra oomph for me. (For those who are ready to add this to their 2019 calendar, it will not always fall on the Full Moon, it will always be on November 23rd.)

Joe and I prepared in advance. We not only got cake mix, yellow icing, a steak to split, and worked on making gifts for each other, but we got dog bowls, two different kinds of dog treats, two “Top Dog” award ribbons, a paw print pattern bandana, dog temporary tattoos, dog party blowers, paw print napkins, mini dog and wolf figurines, wolf plushies, and dog stickers. We started the day by Joe opening the invitation I sealed up in an envelop for him that cordially invited him to celebrate Wolfenoot all day long. Then, we exchanged Wolfenoot presents. He turned one of the logos into a framed print for me and I colored a wolf and glued it together for him. We set up the table with all our supplies as we listened to the Wolfenoot playlist I created (all about wolves, dogs, and the moon). Next, we set up a little stand outside with a sign that said, “Happy Wolfenoot! This is a holiday all about wolves and dogs. Please take a treat for your pup!” and placed it next to a bowl full of turkey bacon treats (with the bag out so pup parents could see what they were feeding their fur babies), a bowl of water on the ground, and a few little flyers I made that further explained what Wolfenoot was. We then headed to the park across the street from my house which is usually full of people walking their dogs and playing catch with them, but Wolfenoot was particularly cold in Baltimore (28 degrees Farenheit), so we really had to run around scouting for them. Joe had the bag of treats, and I had a tote bag full of the informational flyers, the dog tattoos, party blowers, paw print bandana, dog figurine toys, and “Top Dog” award ribbons. We figured we’d probably run into some kids, and we’d like to be able to give them some goodies, too, and we decided we would each award our favorite dog of the day with a “Top Dog” award ribbon.

As we approached people and their dogs, I would say either, “Happy Wolfenoot! Do you know what that is?” or, “Would you dog like a treat?”. Whenever I do guerrilla art, random acts of kindness, or really anything involving strangers, I’m always prepared for rejection, confusion, or people potentially being rude or saying things like, “This is weird”, “Why are you doing this”, or “You have too much time on your hands”. We were surprisingly met with almost 100% happiness. There was definitely a bit of confusion, because only one couple out of all the people we talked to had even heard of Wolfenoot, but I think me leading with the fact that a seven-year-old just wanted to celebrate dogs and we were doing this for free, combined with the informational flyers really helped. We only had a couple people turn down treats, and usually it was because they had just had some treats, but they would gladly accept pets! (It also doesn’t hurt that I was wearing a sweater with a literal rainbow on it and a brightly colored hat; people find that very approachable!)

We always made sure to ask if we could give the dog a treat (and were carrying the treats in a bag, so the parent could see what kind of treats they were). We asked what the dog’s name was, pet the dog, and tried to remember to take a picture and/or video. We handed out the temporary tattoos and a dog toy to a kid playing with his dog, and gave a bandana to one of the last dogs we saw before going inside.

Before I show you a bunch of dog pictures of ones we remembered to photograph, I want to introduce you to my and Joe’s Top Dogs. These are the ones we gave our awards to, and their parents were so tickled by it! This little brown baby (so young, he’s still being measured in “weeks old”) was mine. Look how tiny (and he was soft). This lil guy is Teddy, and he had the cutest little trot he did up to Joe when we approached him. I think he also was aware he was winning an award.

Okay, now enjoy all these dogs we met (and this is just some of them)! Some were playing catch, some were taking very slow walks, some were super chill until they got a treat and then jumped all up on us, some had the silliest looks on their faces, and all of them I wanted to take home with me. We did two rounds of going outside because it was so cold. We came in for a break, ate lunch, and went back out. We ended on a really good note, even if we had treats and a few flyers leftover.

When we came back inside, my friend Charlotte came over to hang out. Maura and Alan stopped by to drop off some dessert goodies, and Cristen ended up getting off work early, so we had a good little group going. Joe baked the (Funfetti) cake, and I helped to frost (ice?) it. Joe printed out an image of a wolf howling at the moon and turned it into a stencil so he could fill it in with rainbow sprinkles. I couldn’t make it out at first, so I insisted that we add a googly eye to the wolf to make it easier to discern. It was also the Full Moon, which is something I celebrate anyway, so I created an altar on the table with the remaining objects we had from our Wolfenoot supply along with moon twinkle lights, a moon LED lamp, crystals (specifically ones that coincided with the Gemini full moon like Citrine, Chrysocolla, and Clear Quartz), and lots of candles. Charlotte did some Tarot readings for us, and we used my moon cheat sheet (that I make for my Uncustomary Babes Membership Group Awesome Tier members) for discussion topics that relate to the Gemini full moon as we listened to the Wolfenoot playlist in the background. Finally, I was hungry enough for Joe to cook up the steak and we had completed all our Wolfenoot responsibilities! We ate that roasted meat, then a slice of the full moon cake, and it was all delicious. I also might have stuck a bunch of puppy paw stickers to my face for the latter half of the night. Celebrate how you want! If you’re interested in learning more about Wolfenoot, check out the website and FAQ page. They also have a Facebook page and a Facebook group (some real treasures in there, seeing how people celebrated all over the world)! You can also invest in some Wolfenoot merch! This is a serious event, and hopefully the first of many amazing things this creative child comes up with.

And don’t forget to download your free printable of 20 ways/ideas to celebrate Wolfenoot! Did you celebrate Wolfenoot? Will you join in next year?