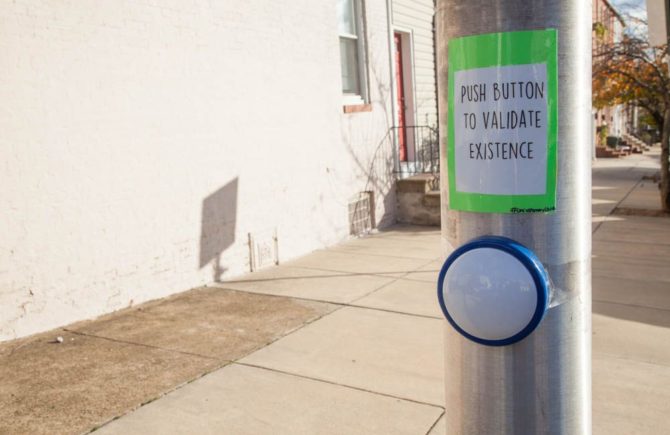 Once on Pinterest, I saw someone change out the sign that said, “Press Button To Walk” at the intersection to something like “Restart Universe”. I loved that idea, and I wanted to do it in a bunch of ways — not just in places where buttons usually exist. I put signs on top of existing signs where people are accustomed to pressing buttons (i.e. crosswalks), but I also wanted to create something completely new that was out of place and by pressing the button you were doing so purely out of freewill. I obviously chose the best day in the world to do this — a freezing cold Saturday in November with 50 MPH winds. Joe walked around with me and helped me glue the dollar store push lights to poles and reinforce absolutely everything with packing tape because the wind was not playing nice! Some of the signs were more direct, telling you that by pressing the button below you would be doing something specific like, “Reboot the universe” (yeah, I kept that one in there). Some of them were interactive in terms of opinion like, “Do you believe in magic?”. And then there were some really vague ones like, “Press here to start”. Start what exactly? I still don’t know. Maybe you do.

It was really cool to see how long they lasted, and I put a hashtag at the bottom of the sign and I actually found one person who took pictures of them and posted them to Instagram. He did exactly what I wanted. He found one, then another, then went on a scavenger hunt. They were all within a 2-3 block radius of Joe’s place. You just had to find them. Ten total to begin with, although right now I think only about six remain. My favorite ended up being the universe one randomly, because of its placement. The push button to cross the street was on a separate pole, farther away from the intersection (weird, right?), so there was a pole right next to it not being used. I put my button there and it was blue, just like the other button because someone has slapped a “Shop Small” sticker on that button. It looks like twins! I like the idea that you can press one, both, or neither. I really like the idea of pressing my button and then just jaywalking. It is Baltimore, after all.

Here’s a round-up of the ten buttons I put up with Joe’s help! Which is your favorite?