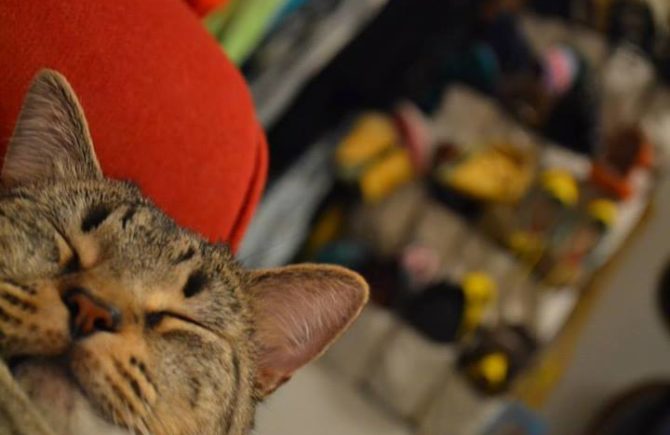 Saying Goodbye To Bug [And A Mail Art Call]

Yesterday my dad told me Bug didn’t greet him at the door the night before when he came home from work and he didn’t sleep with him all night. It was very unusual. The vet took some blood samples and said it was likely just a bladder issue since Bug is 9 and getting up there. But when my dad took him back in today, we found out he has lung cancer and is in pain. He’s had it for months. Cats are very good at hiding their pain. His breathing was labored. Even though the vet was his least favorite place to be, he sat in that weighing scale, totally still. He was in pain. Bug came from a bad home. A home full of dozens of other un-fixed animals running amok. My boyfriend at the time knew the person at the house Bug lived in, and saw what was happening. Bug was being blamed for all the bad behavior of another cat. Bug actually wasn’t even his first name, it was a racist slur name which I won’t repeat. That’s how bad this was. The person who wanted to keep their cat blamed all of their cat’s actions on Bug and as a result, Bug ended up being put outside without food or water. My boyfriend, was allergic and had no way to keep the cat knew this was unjust and saw spunk in little Bug and knew this couldn’t happen. One day the mom of the house was holding Bug and about to leave. My then boyfriend asked where she was going, and when he found out it was to have Bug put down he took him out of her hands and took him to his house. We kept him in his basement while we tried to find a home. I wanted to keep him, but I was living with my grandmother, and she didn’t want a cat. That week, my grandmother tripped, broke her leg in multiple places, and died during surgery. Our home was broken, but we were able to take Bug in. And we did. Bug entered our lives in a way that I can’t express accurately. He was timid at first. He had been abused and was scared of being shuffled around. But as he realized this new place was a safe space, he took over. Bug took over in a big way. It’s so cliche and stupid to say that animals saved you, but he did. Bug saved us. We were missing Nannie, and he filled an emotional void and that void overflew with his energy, sass, and love. I can’t count how many times I was depressed, suicidal, broken, hurt, or just needing comfort and Bug knew exactly what to do. Dr. Bug, we called him. He started off being my cat, but he quickly grew a very close connection to my dad. He and my dad had a connection like none that I’ve ever seen. The amount of times I’ve walked in on them spooning and Bug wasn’t the little spoon, let me tell you. It was adorable. When I moved out and on my own, one of the hardest things was leaving Bug behind. But I knew I had to because Bug was my Dad’s best friend. They belonged together like peanut butter and jelly. Or peanut butter and just peanut butter if you ask my dad for the recipe. It took me months to mourn not being with him. To not have him run to the door as I unlocked it. To not do kitty zooms up and down the stairs. To not keep treasure troves under the love seat of skeins of yarn, shiny toys, and specific Rolodex cards because clearly that cat had contacts. I never wanted to have to see my dad say goodbye to Bug. But I did. My dad is a strong man. He has seen so much change and said goodbye to so many things. And I don’t know how he does it. I’m just barely getting started saying goodbye to things and I feel like I’m just barely hanging on, and he’s this pillar of strength that I can’t even begin to identify with. But I love him and respect him for it. This might seem a little over the top for a cat, but I don’t care if you feel that way. Love is love. And love from a pet is pure. Bug’s love was pure and innocent. He loved tuna from Subway more than you’ve loved anything in your entire life. He loved purple and he had terrible taste in music. He had soft short fur on top and a long luscious long fur on his belly. He was a cat of routine, ritual, and love. I am so angry that this happened. I have had so much happen this year, and this was the last thing I fucking needed. I honestly don’t know how to deal with it. But I’m more worried about my dad. So I’m asking for your help.

I would love for you to please send some CHEERFUL mail to my dad. His name is Pete. He loves orange, Charlie Brown, lacrosse, peanut butter, Farside comics, cats, reading, libraries. In fact. I’m going to make the album of Bug on my Facebook public and if you want to download a picture from there and make a collage or something out of it to turn into a notecard or postcard to send to him, that would be amazing.

I don’t want to put his address out online, so if you just e-mail me at mary@uncustomary.org for the address, I will respond to you with it.  I really appreciate it if you can send him something to cheer him up. This is a really rough time for him. It’s like his child died. He’s alone, and I want to be there for him, but it takes a village.

Thank you so much for your support during this time. I might take longer to respond to messages, etc.

Take this as an opportunity to spend time with your loved ones today and make as much time for them as you possibly can.

This is some old footage I took of Bug to turn into an “episode” of him. We will always remember you, my precious, sweet, little sassy prince.

Thank you Bug. For making our lives so much better. I hope you’re at peace.
in Bug 06 Sep 2019 1 comments
Share
Post tagsBugcatsnail mailvideo