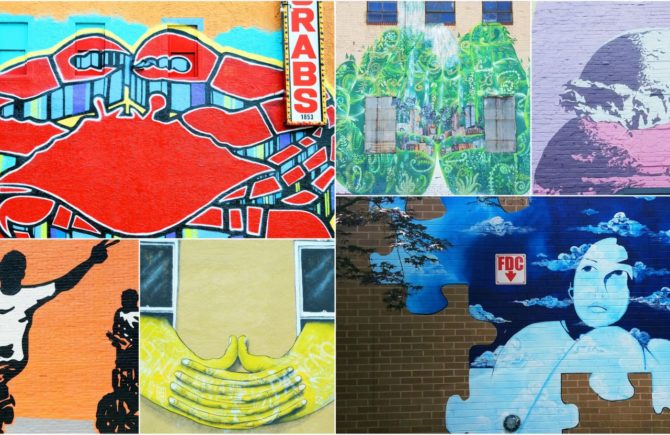 I’m continuing on with the Rainbow Baltimore project (see Rainbow Doors, Monochrome Outfits, Rainbow Rowhomes, and Rainbow Walls) with Rainbow Street Art! I think this one is a great resource if you’re a photographer, blogger, Instagrammer, etc. to be able to know where some great backdrops are to pose in front of! I hope it helps some of you Baltimore babes out with making your photos pop! It’s also obviously awesome if you’re a fan of street art and want to know where new murals, spray art, installations, etc. are!

It’s always interesting to me to see which color is the easiest to find in each category and which is the most difficult. In the past, orange and purple have been generally really hard to find which seems so counter intuitive with our sports teams’ colors – but not this time! This time, purple held up to it’s difficult standards and was the hardest one to find (followed closely by red which kind of surprised me). But the easiest two to find were yellow and blue!

Okay! Now let’s see some colorful street art! Beneath each collage I’ll share the intersections where you can find the colorful pieces yourself. Keep in mind all public art is temporary, and it’s always possible that someone can paint over a mural or demolish a building. In fact, when I went to photograph a bunch of murals I had planned out for each color, they weren’t there when I got there because of those exact reasons. But there is beauty in impermanence, and this is a good guide to get you going! I tried to stick to two-dimensional murals, but there are a few 3D installations I had to throw in (in the name of not tearing my hair out). Ready to schedule your trip to Baltimore and explore?! We can at least pose against some colorful walls together. Stay tuned for next month’s Rainbow Baltimore project!