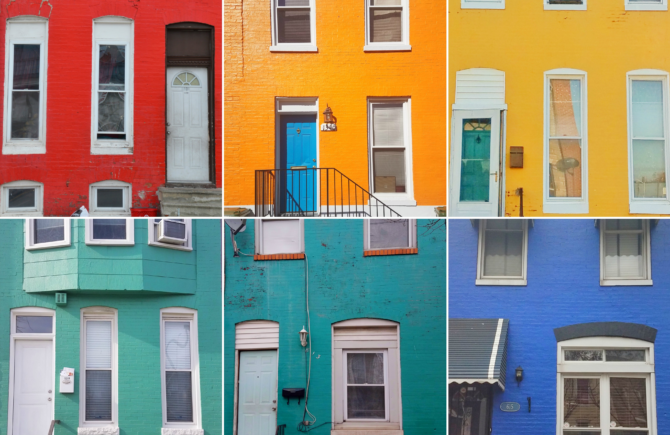 cI’m continuing on with the Rainbow Baltimore project (see Rainbow Doors and Monochrome Outfits) with Colorful Rowhomes in Baltimore! Baltimore is famous for its rowhomes; there are always people hanging out on the cement stoops, and lots of people like to paint their homes colorfully. Unfortunately, there are approximately 16,000 vacant homes in Baltimore and on any given night there are 3,000 homeless people on the streets of Charm City. There’s so much potential for businesses, homes, and more. It makes me really sad to see the totally abandoned rows and rows of homes (especially when they’re so full of color and you know they used to be full of life)!

I was at an Ignite Baltimore event (think local Ted Talks) a couple years back and a man talked to us about this row of homes on Lanvale street that were all abandoned. People had brought some life to them with street art, painting the boarded up windows and doors with designs, words, and designing sculptures. The street was gorgeous, yet vacant. Then, that man bought one of those homes, which was a crack house. It was totally dead and decaying on the inside, but he did the math and the cost of buying a broken home and paying to have it fixed up was actually equivalent to that of just buying a fancy new home outright — something that those in the house flipping industry consider as a red flag. He had the time and patience to outsource the work, so he did.

Now, when you drive down Lanvale Street, there’s not so much street art. But that’s okay. It makes me equally happy because I know that people followed in his footsteps and decided to take back those houses and turn them into homes.

Okay! Now let’s see some awesome rowhomes! Beneath each collage I’ll share the intersections where you can find some colorful rowhomes of that color yourself! Whaddya think? Ready to come to Baltimore and explore!?

PS – Thanks to Maura and Cristen for riding around with me to help write down the locations on my clipboard!