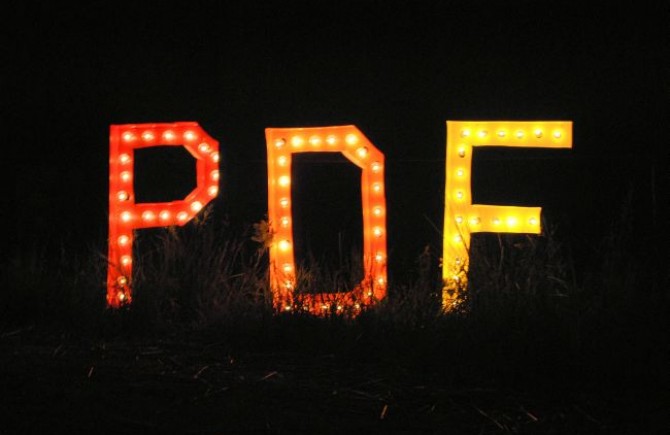 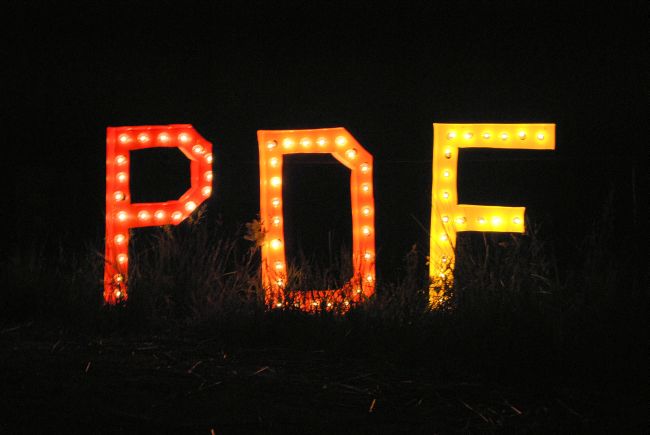 You’ve probably heard of an event called Burning Man, at least in passing. If you would have asked me about it a year ago, I would have only been able to tell you it was a huge event in the dessert for hippies, but that’s such an incomplete thought it’s basically incorrect. I still haven’t been to Burning Man, but I did attend my first burn ever this weekend, Playa Del Fuego.

Playa Del Fuego (PDF) is an event sponsored by the same people who put on Burning Man. There are tons of regional burner events across the country, and this is pretty much the closest one to where I live. A month after I met Joe, he headed off to PDF with his group of friends that I’ve grown to love over the past eight months. They told me I’d love the event, and I believed them, but I was still nervous about it. 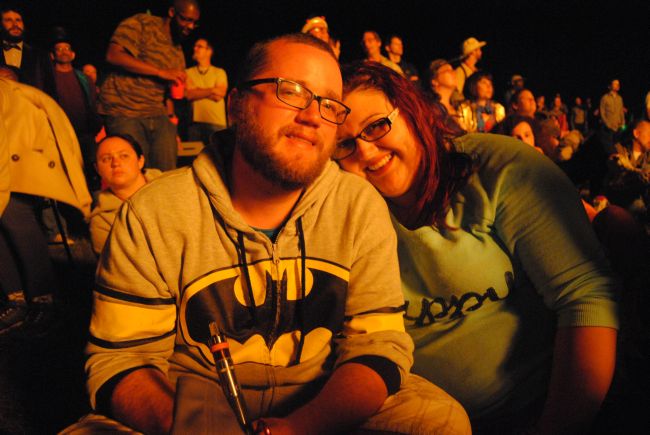 Joe and I right before we left PDF *

A burn is something you truly have to experience first-hand to fully understand, but now that I have, I’m going to do my best to really give you a description of what happens there and recommend it to you with my whole heart.

PDF happens in a giant field on the grounds of the Vietnam Veterans Motorcycle Club in Townsend, Delaware. It starts Thursday evening and everyone has to be off the property by noon on Monday. Lots of people get there Thursday night, but even more trickle in Friday and Saturday. It happens twice a year, on the weekends of Memorial Day and Columbus Day. Tickets are purchased in a lottery fashion, and are $50 a person. 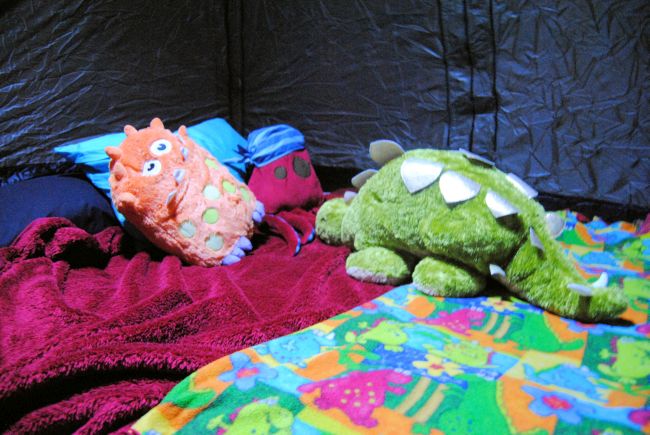 How Joe set up our tent the first night

You are expected to bring everything with you that you would need for the duration of your stay. It’s kind of like fancy camping. Everyone brings tents, but most people come in larger groups so there is a big communal space where you can spend time, make food, etc. Our camp is called Shut Up Dinosaur Stu, and we all have dinosaur onesies. Although our camp has a theme of dinosaurs, it’s not one of the official themed camps. There are a few registered theme camps with fun names like Camp Justice League (super hero themed) and Philly Phreaks (sideshow themed).

The only thing that can be purchased at Playa is ice. Everything else you either bring yourself or receive as a gift. Gift giving is one of the ten principles that are applied at burns like this, and it’s kind of intense. The idea is that everyone brings a gift to the community. That gift might be an art project you make and show off, like the tape art LED-lit dinosaur Joe made (Dino S. Thompson), a service you provide, like a Costume Camp that gives out free clothing, accessories, and props, or a meal you make, like the question-mark-shaped pancakes that Camp ? made for anyone who wanted one on Saturday morning. I brought “You Are Beautiful” stickers and my “Perfectly Adequate Performance” ribbons to hand out to people, and it was really cool to see people wearing them throughout the event. 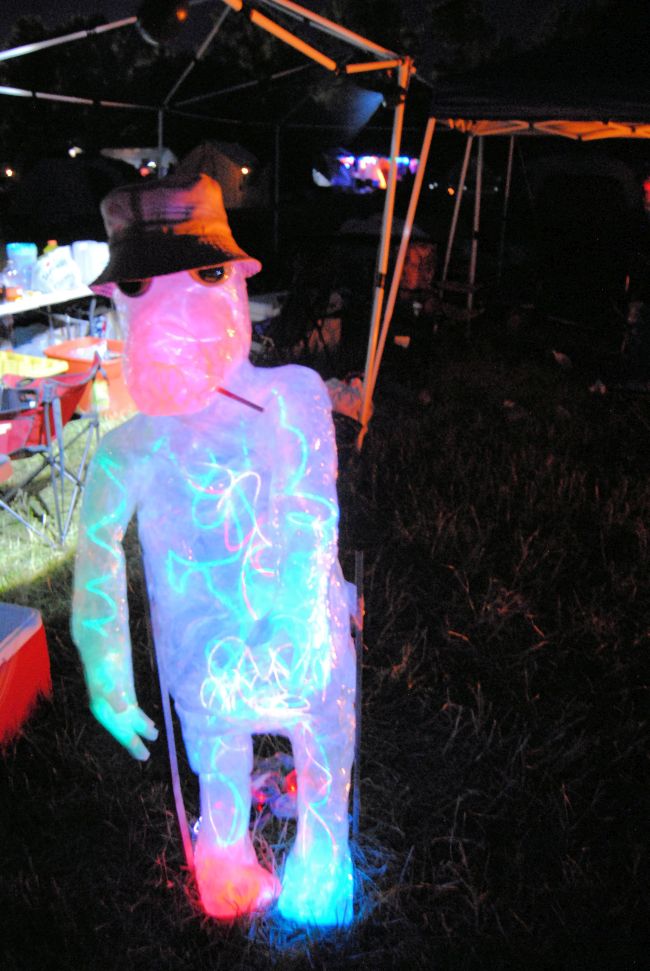 Gift giving is only one of ten of the principles at events like these, though. You can learn more about them here, but they are as follows: 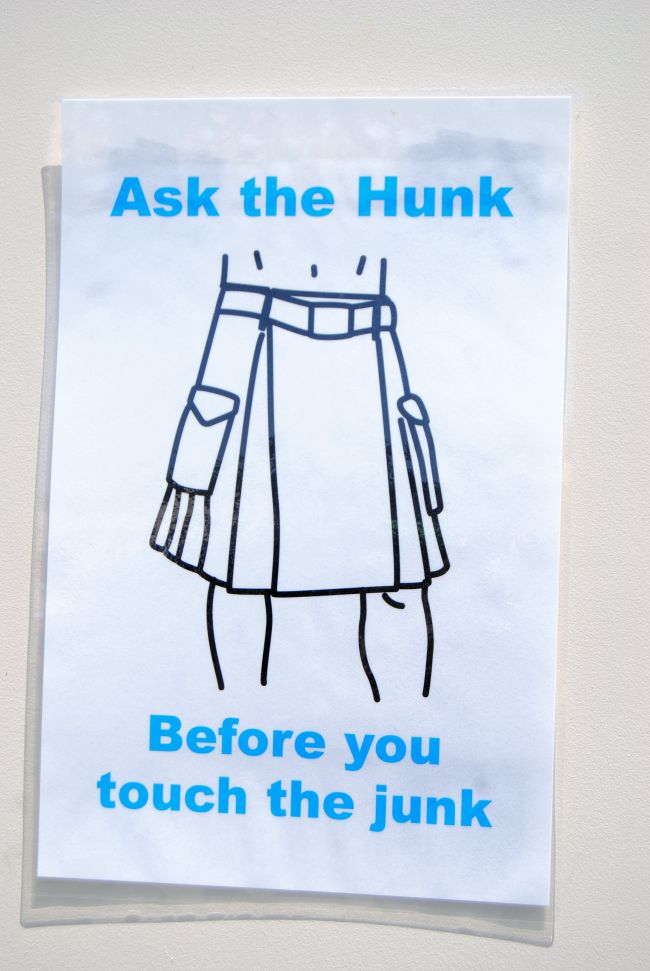 A reminder about consent

Something that’s really wonderful is the idea that in a five-day period, a space goes from an empty field, to a fully operational city/ecosystem, back to an empty field. Once everyone scurries back home Monday afternoon, you would have no idea anything ever happened there, because all the participants have a great sense of self-reliance and leaving no trace of MOOP (“matter out of place”). There aren’t even any trash cans, you just take everything with you. More than that, though, there is this beautiful message of impermanence, where a temporary piece of magic exists and disappears. If you blink, you might miss it. 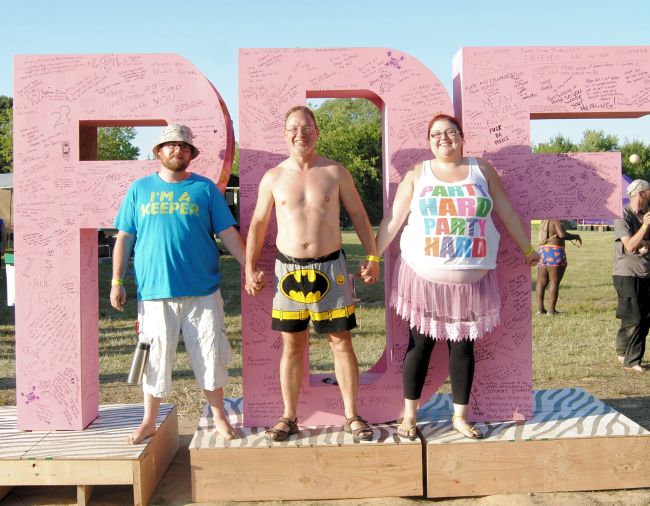 Joe and I with one of the burned pieces of art, with the artist “Sheck” **

There are no judgments in this space, and all types of people attend. I saw people in elaborate costumes, onesies, and naked as the day they were born. There were stilt-walkers, fire dancers, and jugglers. Lots of circles came together in harmony, and most overlapped. There are no cliques, there are no stereotypes, there are no categories of people. They’re all burners, and they’re all there for fun. 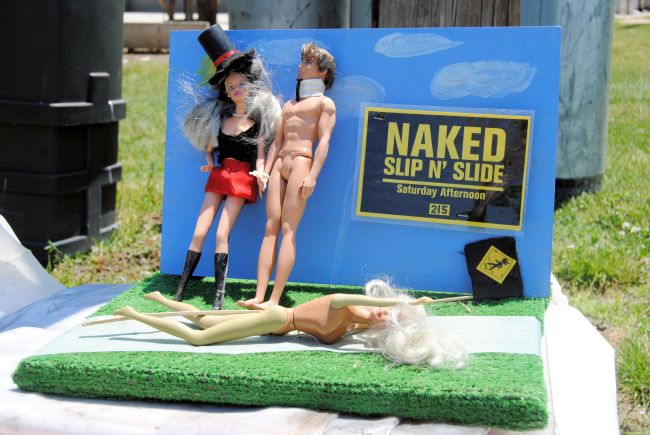 One of my favorite forms of self-expression was an event on Saturday called the Naked Slip N’ Slide, which is exactly what it sounds like. Anyone who wanted stripped down, ran 20 or so feet, and propelled their naked bodies onto a massive slip and slide. A giant group formed, cheering everyone on. I’d say that running naked is one of the most vulnerable positions you can be in physically, in terms of potential judgement. You’re not in control of how your body looks. There are no Myspace Angles, your cellulite and rolls of fat move freely, but no one cares. No one is judging you, they’re just cheering for you. Can you imagine feeling that free and being genuinely encouraged for it? 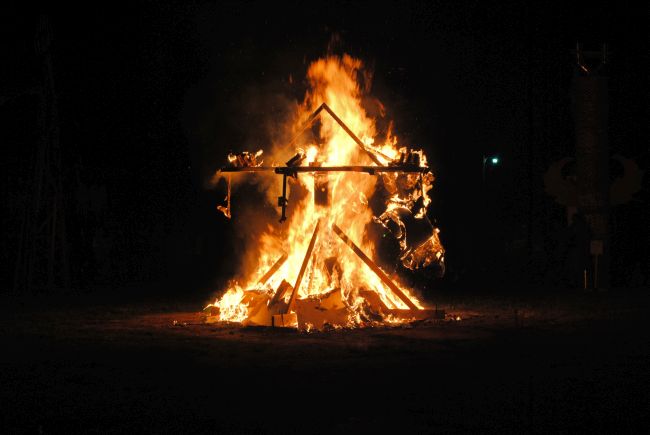 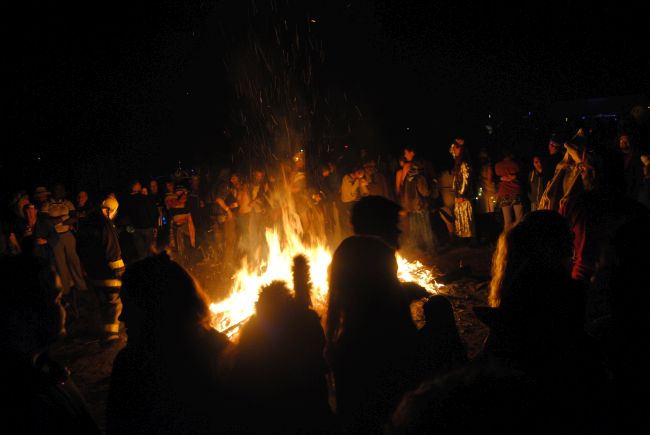 Running around the fire

Saturday and Sunday nights, as soon as the sun left the sky, we headed to the main field where a burn occurred. This is where burns and burners get their name. At these events, giant wooden sculptures, made and donated by participants at the event, are set ablaze while everyone at camp watches. The first night they burned two, including a pony with fireworks installed inside. The next night was the Art Burn, where they burned at least six wooden installations, many of which we were encouraged to write on throughout the event. For example, there were three massive letters (P, D, F) with different prompts, asking you to write your answers directly on the sculpture. (Example: D was for dream. What would you do if you won 100 million dollars? Write it down.) It was very cathartic to watch these collaborative projects be burned, and once they fell down, the firefighters there to ensure safety would whip their arm in the air, signifying that we could all run around the fire. It was primal and beautiful. 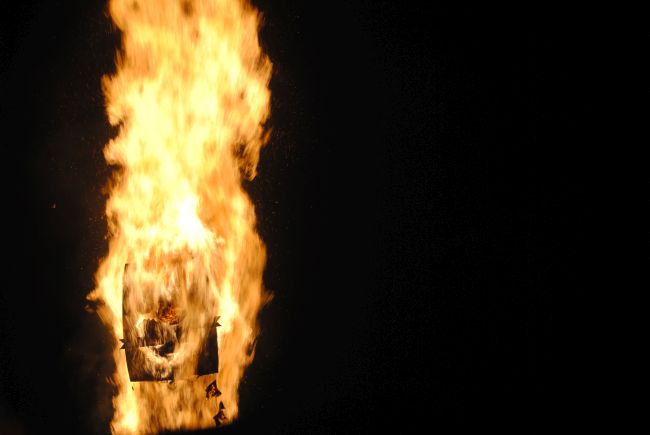 One of the art burns on Sunday

Ultimately, this place was fantastic. A man dressed up as Santa on stilts, and pushed around a cart to deliver gifts to people at the camps, there were twinkle and LED lights everywhere, and one camp built a giant climbing sculpture that allowed you to see the entire event at once if you reached the top. Joe and I climbed it, and it might have been one of my favorite parts. There was even a basket for your stuff that you could pull up once you got up there! (That way I didn’t have to worry about carrying my camera on a ladder and could still snap a photo!) 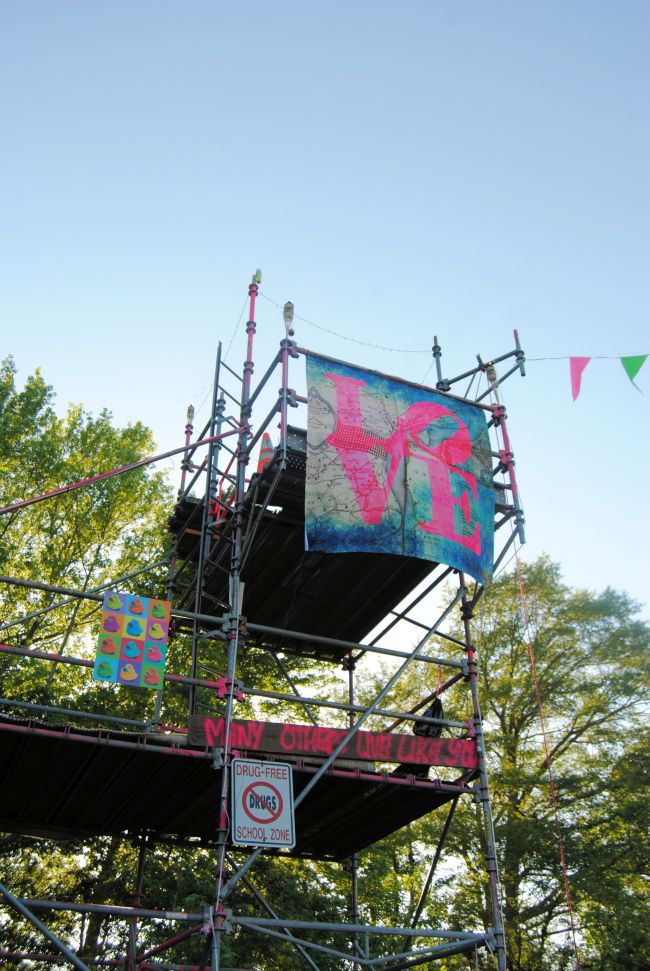 The tower we climbed 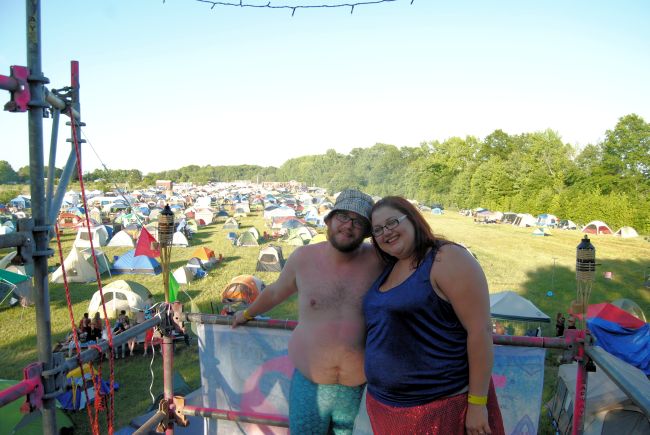 As I hugged everyone goodbye, Mike said something to me that kind of wrapped up the entire experience for me. He said burns are kind of the environment that I try to create every day with the fun, silly things I do, and he really appreciates that I do that in normal life. That’s when I realized that I belonged here all along, and it just took me twenty-six years to find it. My friend, April, told me finding the burner community is like the Blind Melon video for “No Rain” when the bee finds her people. I’ve always loved that song, but never saw the video, and it’s perfect. 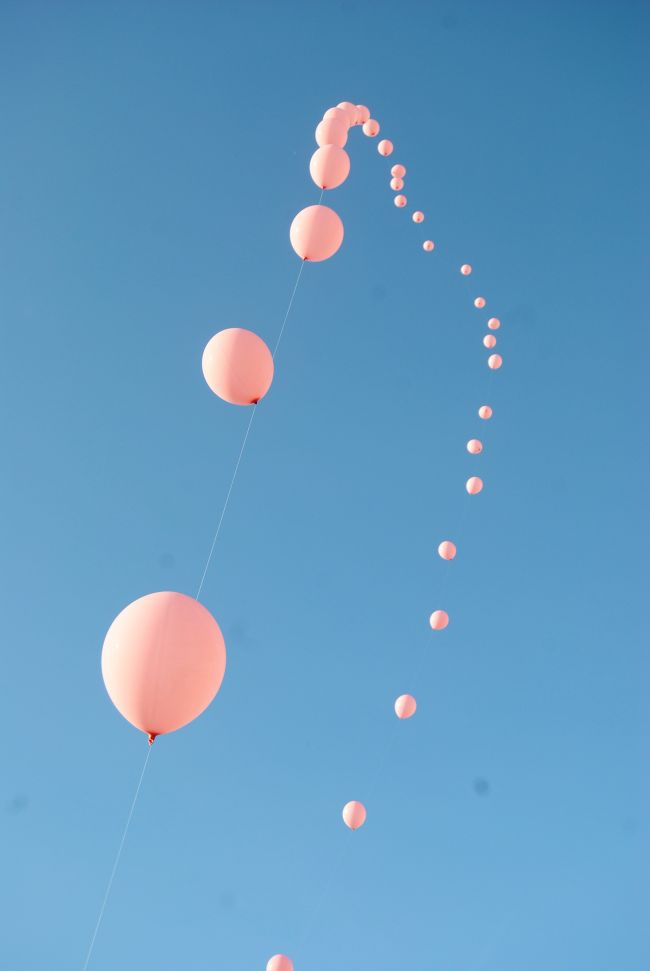 One of the two massive balloon arches that stretches across camp

I wouldn’t have had this experience without these fantastic human beings, and I appreciate each and every one of them. We babed so hard this weekend, and this is just the beginning. 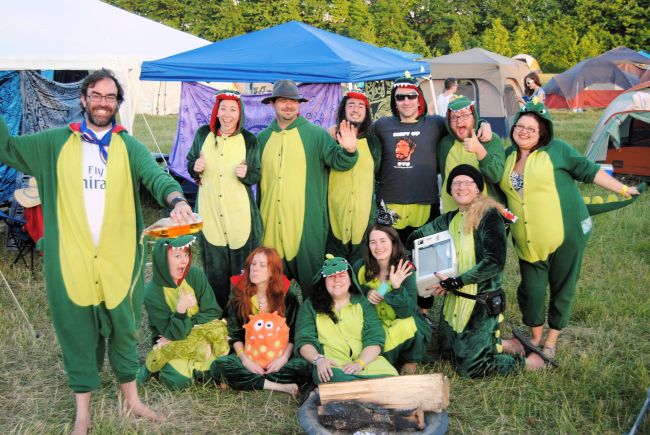 PS – Here’s some silly video footage for you of us dinos destroying a city. We’re pretty cool.

If you have any questions about the event, please leave them in the comments. I didn’t really cover minute details like food, showering, specific events, etc. so if you want to know something for your own edification, please ask! I’ll do my best to answer. And please check out the website for PDF for more information. I hope to see you there in October.