I had four bucket list goals involving New York City, and this Summer I got to cross two of them off! I had only ever been to New York in the freezing cold Christmas-shopping-season, and I desperately wanted to experience that crazy city without worrying about frostbite. My friends, Ashley and Munchel, accompanied me to Brooklyn, where we stayed in a hostel (a first for me!) in Williamsburg. 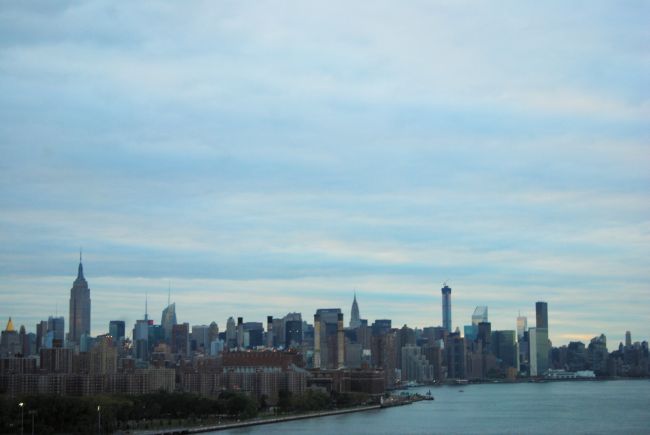 Walking around Brooklyn is pretty fantastic because the amount of street art you’ll see is enormous. There are multiple murals on every block, just welcoming you to the area. Brooklyn is a fairly industrial-looking area (not to mention hipster), and the public art really makes it seem more fun and friendly. Probably 70% of the photos I took were of murals, so I plan on doing a feature of just that soon. For now I’ll just share a picture of one of the stickers I left my mark with, in front of my favorite mural I saw. 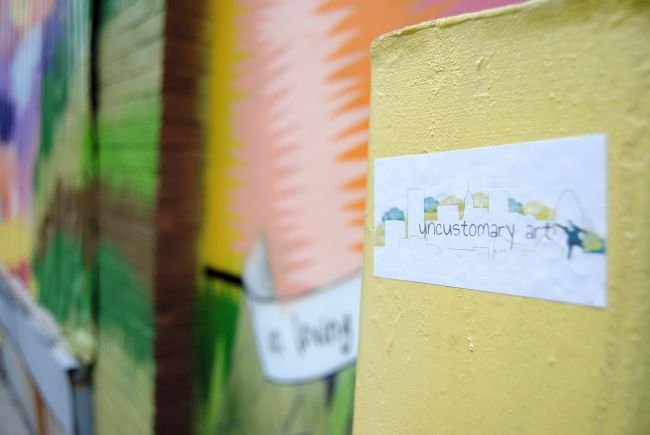 I went to a lot of different bars while I was there. Bar hopping in Bushwick is super easy because there are tons of bars in close proximity, and they’re all really fun! I played a two-person version of Cards Against Humanity at a bar called Whiskey, took a picture of a hot bartender at Skinny Dennis, and ate free cheese puffs at The Levee.

Other places I consumed food and drink at include Sweet Science (shout out to the great bartender, Dave), Fine & Raw Chocolate (delightful pin up girls on their wrappers), Taquiera El Fogon (you guys will be a lot better when you get your liquor license, but A+ on the guac), Local West (holy moly rooftop bar within view of the post office and Penn Station!), Spice (where they pour your soda in giant fancy glasses), Rumours Irish Pub (good burgers), Gin Palace (essentially a vampire bar), Double Down Saloon (photobooth and house shots called “Ass Juice!”), Mercury Lounge (great live music), Barcade (great hangout spot with arcade games), Noorman’s Kil (in case you need a grilled cheese at 3:30 am), Crif Dogs (the best hot dog I ate in NY), and Francois Payard Bakery (where I ate my very first macaron). 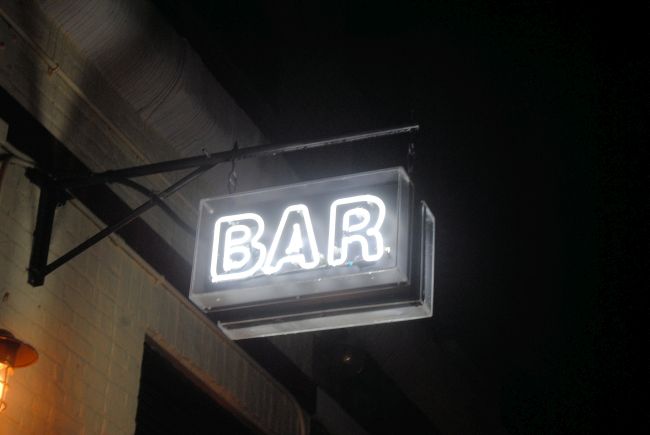 The excitement I had over the Farley post office on 34th Street can only be described as nerdy. I skipped up the tall cement steps and into the gloriously giant foyer where I quickly wrote nine cards to some of my favorite people with nothing but the black pen attached to the counter. I hadn’t planned on going, so I didn’t have any cool supplies with me, but it would have been ridiculous to pass up the opportunity to post mail from the biggest post office in the United States. 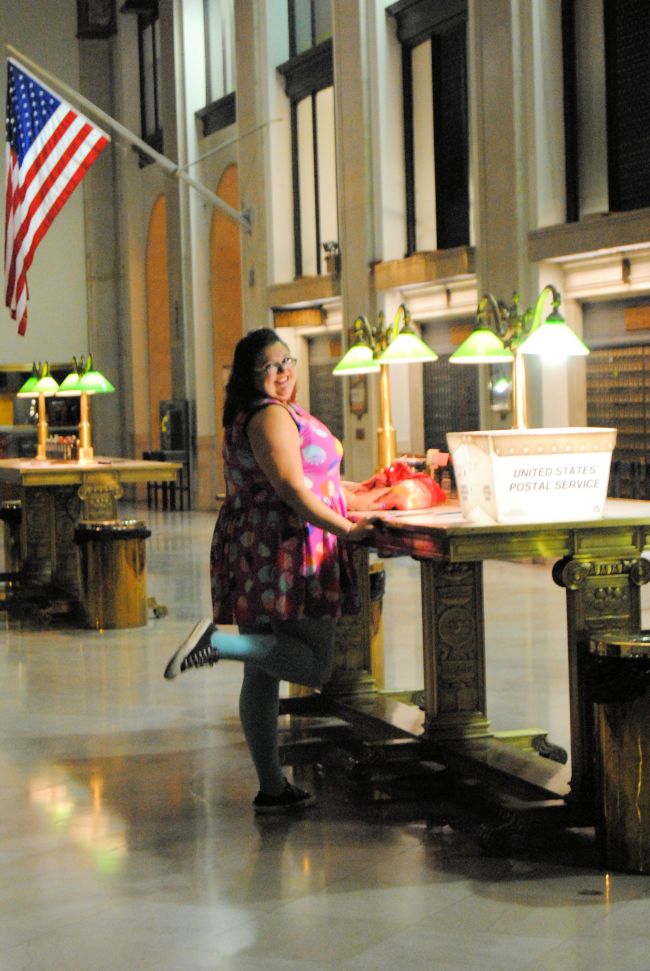 On Friday, we made our way to Coney Island. As soon as I got off the subway, I was thrilled. I was kind of bummed that no one else was as into it as me, but it was fine. It was a dirty, kitschy, touristy place full of my favorite things. Everywhere has mermaid memorabilia for sale, the food is delicious and disgusting, and every sky view you have includes carnival rides. There were sideshow and burlesque performers, tons of neon signs, and buildings with peeling paint. I now know that I have to go there for The Mermaid Parade. Not that I didn’t want to before… 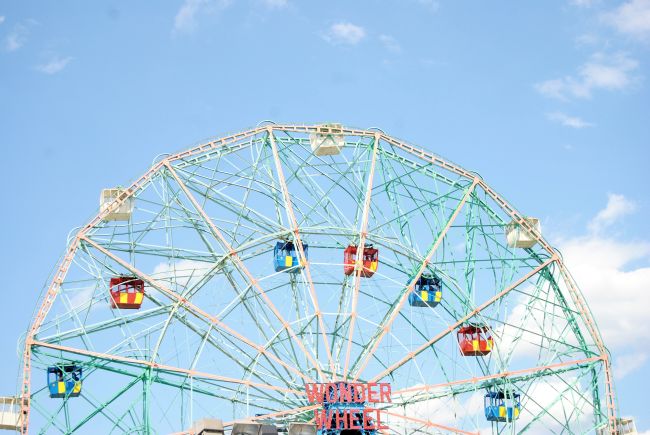 One bar I went to that I purposefully left out of the above list was Barcelona Bar, and the reason is important. This place is in Manhattan, and if you have the opportunity to go you absolutely must. They have over a hundred shots available, but some of them are “Theatrical Shots”. There is a list with the title of the shot, the type of alcohol in it, and whether it includes things like props, music, and fire. The Harry Potter shots we ordered had all three.

Our bartender (who was from Crofton, Maryland!) dressed up like Harry Potter, and yelled vague Harry Potter jargon like “Quiddich” and “Hogwarts” in a nonsensical and crude fashion (with a fake British accent), as he blasted our vodka shots with a torch. It was entertaining to say the least. The rest of the shots we ordered were very PG-13, but hilarious nonetheless. 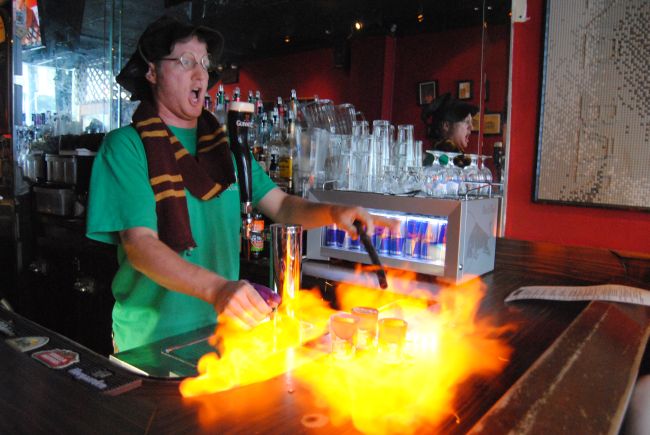 I mentioned that Clif’s had the best hot dogs, and I feel like I’m able to say that with sincerity because the amount of hot dogs I ate on vacation is potentially embarrassing. I did eat at Nathan’s Hot Dogs in Coney Island, and it honestly wasn’t even that awesome. I did get a photostrip in their themed photobooth, though. 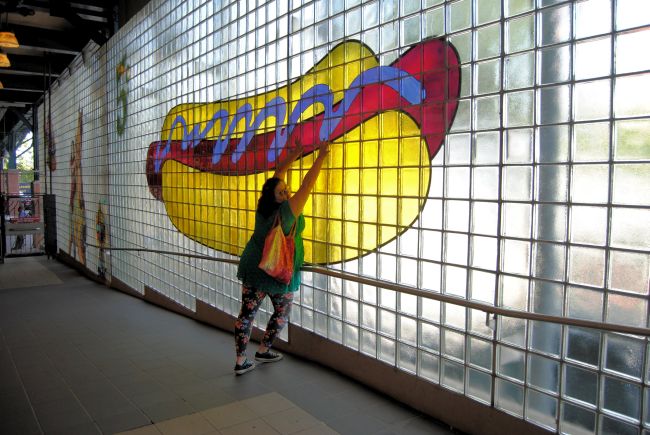 In addition to experiencing New York in warm weather, the other goal I got to cross off my bucket list was to set foot in Central Park. We walked around, climbed on rocks, and saved a pigeon’s life. (Okay, we just disrupted it from its nap, but we all agreed we saved its life, and we were the only ones there, so… It is fact.) We considered getting a ride on a horse drawn carriage, but it is excessively expensive. And speaking of excessive, the guys advertising the bike rentals in Central Park really need to cool their jets. If I want a bike I will come to you, man! 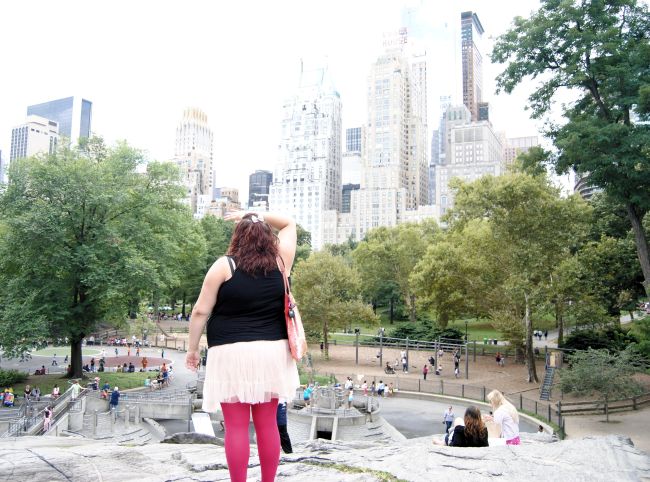 The last thing we did before we got on our bus was visit the Museum Of Modern Art (for free!). The exhibits were wonderful, and I would have loved to go through them at a time when my legs didn’t feel like they were going to fall off after four straight days of walking all over a giant city.

One of my favorite parts of the trip, that I don’t have a photo of was seeing Avenue Q. I can’t believe I went this long without seeing it. Puppets talking about sex? Always a good idea! 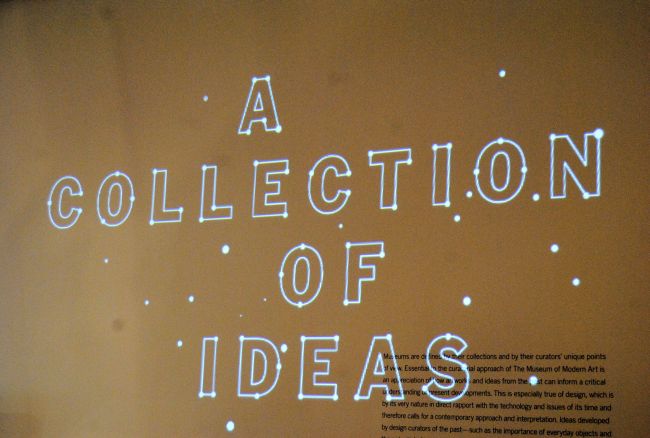 By the last day, we were all home-sick and very ready to get back to our routines in Baltimore. I feel way more confident in using the subway, have fond memories of talking to the locals, and have a ton of new goodies from fantastic vintage shops (like coral colored jelly sandals, antique photos, and strange postcards).

Some of my favorite shows have been set in NYC: Friends, Girls, Broad City. I love seeing the city on those shows, and I loved exploring it with my friends, but I can say with a fair amount of confidence that I will never live there. I can really only see myself living in Baltimore, San Francisco, or maybe Chicago. Those cities are more my speed. But that doesn’t mean that this is my last visit there. I’ll be back, New York.

For a ton more photos, check out my Facebook album.