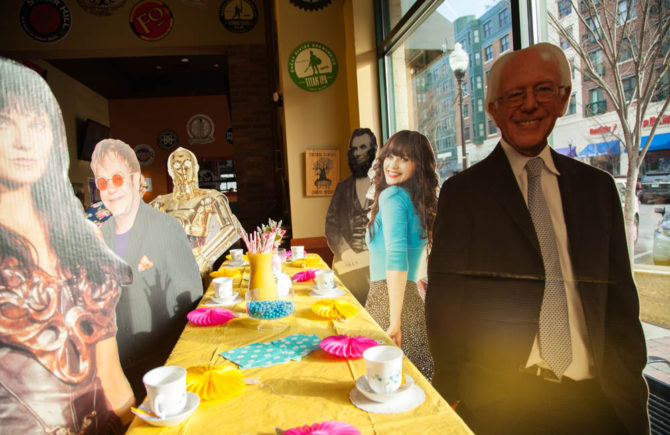 A couple years ago, my friend, Ashley, got me a cardboard cut-out of my celebrity crush, Zooey Deschanel. I have a bit of an overfixation with her, to the point where during this event Maura caught me “checking out” the back of her cardboard cut-out silhouette.. which is just tan cardboard. Right now I’m looking at it as more of a solution than a problem. Anyway, when Laura’s roommate, Liz, brought home an Elton cardboard cut-out from a work conference (still no idea how that was applicable, she’s like an engineer??), I knew we couldn’t just sit back and do nothing.

I posted on Facebook and asked my local friends if they had any cardboard cut-outs of celebrities and I got fast responses! I was pretty happy with the diversity of them. We had my Zooey, Laura and Liz’s Elton, and then Bernie Sanders, Abe Lincoln, Xena The Warrior Princess, and C:3PO & R2:D2. I don’t know that these would be anyone’s answer to the question “If you could invite anyone, living or dead, to a dinner party, who would it be?”, but it sure is an interesting bunch.

From the first picture you can see who is on an official date with who. Xena and Bernie, Elton and Zooey, Abe and C:3PO & R2:D2. The tea party was early on a Sunday morning, held at my boyfriend’s work before they opened. A very formal, private affair. Everyone enjoyed their tea, and all the passersby definitely weren’t freaked out at all. It’s obviously totally normal to walk by at 9 AM on a Sunday and see celebrities, some fictional, some living, some dead, all together having a tea party through a window as you’re carrying your groceries to your car. It’s not off-putting at all.

I’ll just let the next batch of pictures taken by a very willing and amenable Maura, speak for themselves. (Thank you for humoring me in this very absurd situation.) Now, that was just the tea party. There’s always an after party. And a group of hoodlums this diverse is bound to get rowdy and weird. Thank glitter it did. We were so glad to have these babes with us for our weekly Turnt Up Tuesdays… and let me tell you — they made it way more turnt. Bernie is a hula hooping MACHINE. Xena makes the best tacos I’ve ever had, and she used no utensils other than her sword. We couldn’t find Abe and Elton for a while… turns out they snuck off to Liz’s bed to engage in some consensual activities while R2:D2 and C:3P0 surveyed the human realm in the fog from the apartment balcony. “Someday all this will be ours.“ We had a great time with everyone! Thanks to Sara, Annemarie, Kim, Erica, Laura, and Liz for letting me borrow their cut-outs, Maura for taking photos, Louis for tolerating us, Joe and Dave for letting us use World Of Beer for the tea party and Zooey Deschanel for being so damn hot. The cut outs have been returned to their rightful owners with goodie bags including party favors and photos from the event! Here’s making sure things always get weird enough!