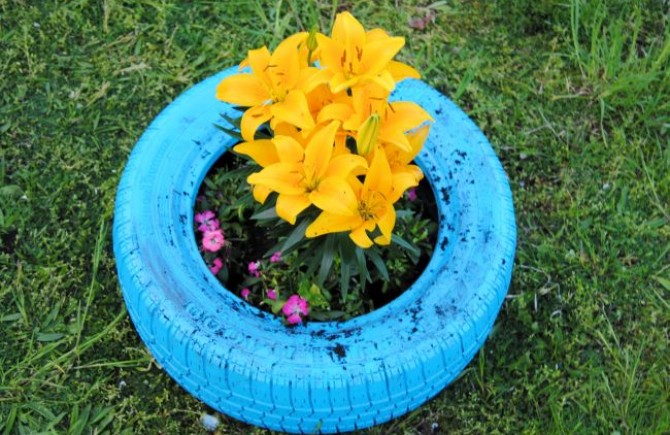 This month, my community event coincided with Earth Day. Last year, I hung out alone in the park playing with ribbon wands, kites, and bubbles, but this year I got a bunch of people together to do some guerrilla gardening. Guerrilla gardening is simply doing gardening in a space where you don’t technically have the legal right to do so. I’ve done some guerrilla gardening projects in the past that have been mobile, essentially dropping off a planter somewhere that can easily be relocated. This time, however, we set some roots. 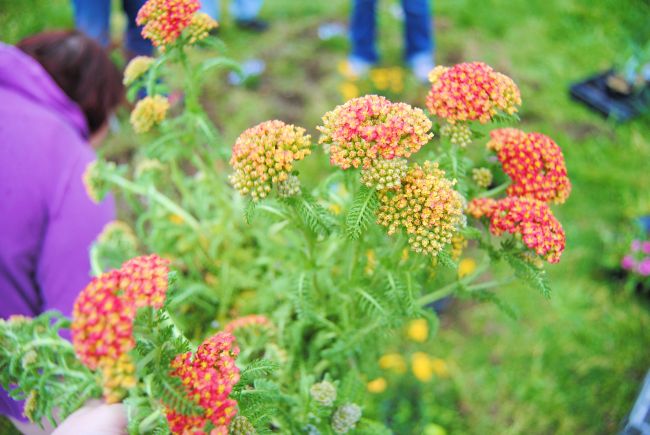 On one of my many drives, a vacant lot in the Sandtown/Winchester neighborhood of Baltimore spoke to me. It was on a pretty bleak street, with a ton of healthy grass and some beautiful vines on the brick behind it. It deserved to be loved, so I invited anyone who was interested to come out and help me beautify the lot.

The lot is actually huge, so we stuck to the left side where the grass wasn’t as overgrown. The first step was to pick up all the trash, and I filled a giant garbage bag full of an upsetting amount of litter including but not limited to a tampon applicator, used condom, syringe, and crack spoons. I never said Baltimore doesn’t have its problems. 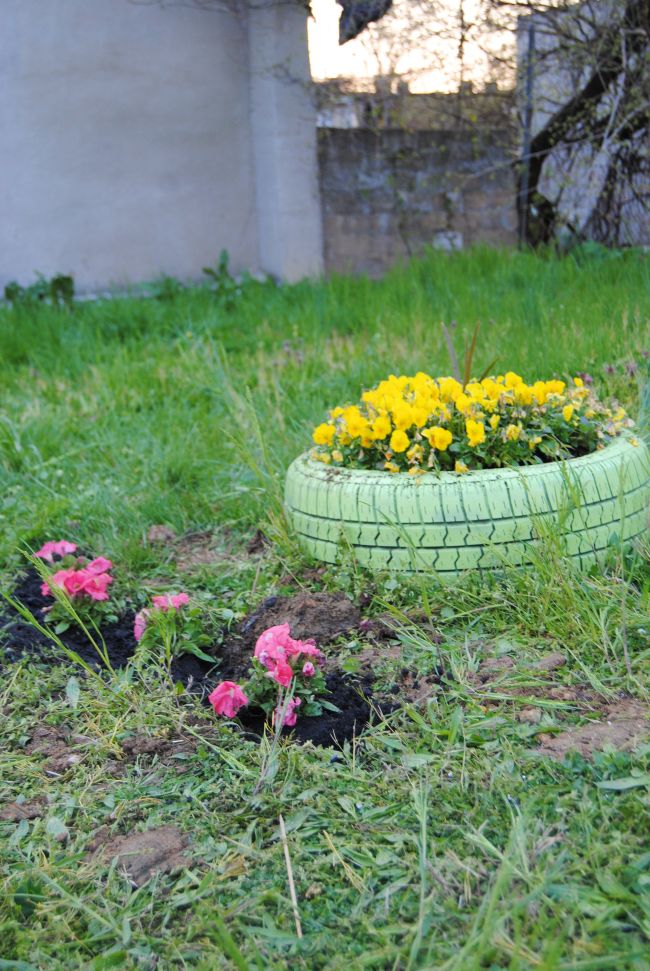 After that, we got to digging! The ground was damp from the intermittent rain we were working in, which made it easier to scoop but it still wasn’t easy. We filled the holes we made and the tires I spray painted with soil and beautifully bright flowers that flourish in full fun. We decorated with metal flowers, novelty stones, and porcelain birds. I also had spray painted a bunch of rocks that we outlined our garden with. 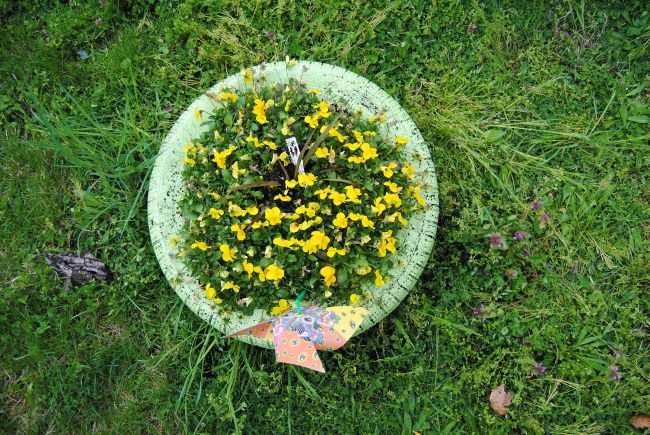 I also sewed together a bunch of beautiful crocheted rectangles that Erica mailed to me to make little pockets. I strung those pockets together in a garland which I then hung fake flowers from, so even in some sort of disaster where all our efforts of planting go horribly wrong and all of the flowers die tonight, at least there will be some fake ones hanging in the distance. 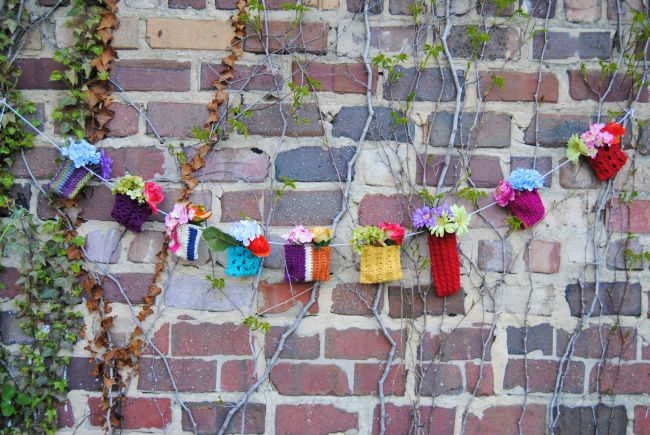 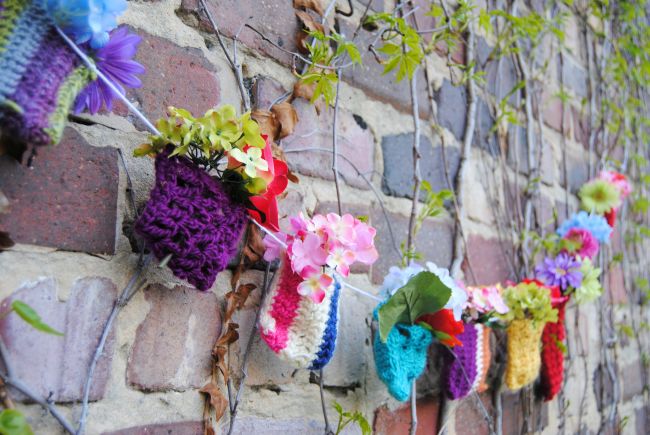 Thanks to everyone who came out to help me: Shannon, April, Mara, Nick, Charlotte, Cristen, Katie, and Andrew. And thanks to my dad for lugging all the heavy crap to my car and humoring us by taking ridiculous photos after three hours of dirty work. Pun intended. Everyone was a huge help! It would have taken me four bajillion times longer to do the same thing alone! 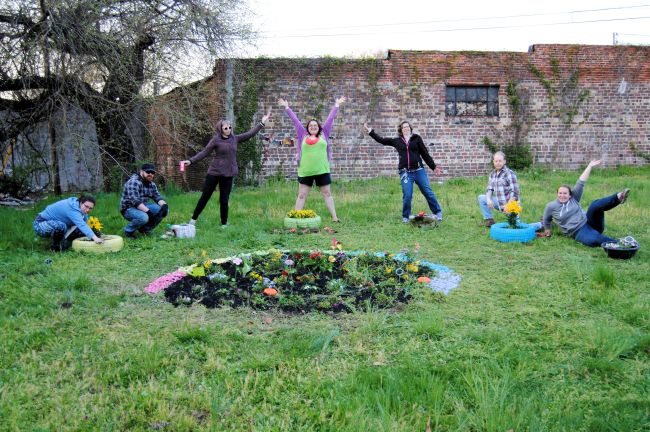 We had some interesting encounters while we were working, too! Besides the rain and my bad jokes, we also got to talk to a crazy awesome stranger named Aaron who sang us silly songs, as well as an incoming on-foot protest. Nothing bad happened, though. If you’re doing good stuff, good stuff tends to happen to you. We were celebrating this fabulous planet that hosts the party that is our lives. I hope you found a way to celebrate Earth yesterday as well. And remember that you can always do your own guerrilla gardening! 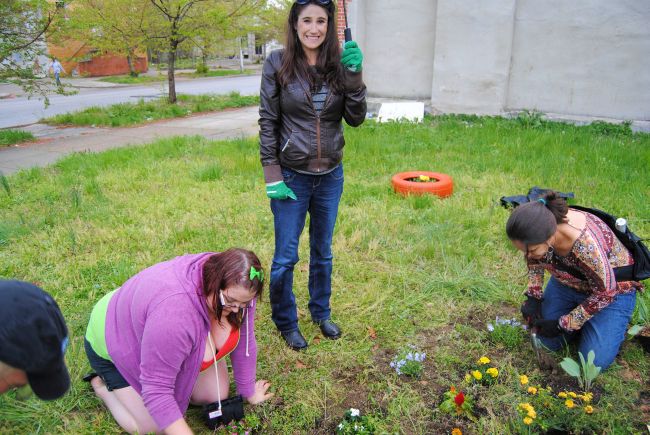 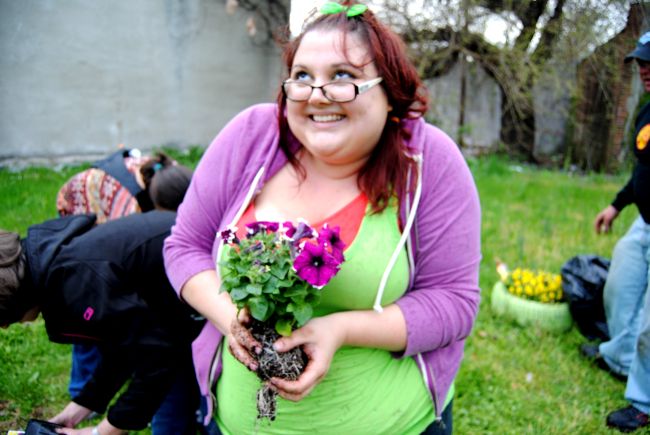 I’m going to go by every so often and make sure everything is going well. If you’d like to visit it for yourself, plug 1106 Riggs Avenue in your GPS.

I also get to cross off “utilize an abandoned lot” on my bucket list!

Photos were taken by myself, Cristen Hoyt, Shannon Dumas, and Peter England. I honestly don’t know who took what, so let’s just give ourselves a round of applause as a group.