Get Messy: An Art Journal Challenge 08

The official Get Messy challenge isn’t due until the end of the month, but I kind of gave myself a mini one for this week. I’m in New York City for vacation for half a week, and I decided that the only things I would bring with me would be a glue stick, scissors, a few markers, and rolls of washi tape. I would have to make my pages for this week using things I bought or found while I was here + the supplies I brought, and nothing else.

So this first page uses one of the ten postcards I got for a dollar (ten cents each!) at a tourist gift shop on Seventh Avenue. I wrote out a fake postcard message to R. Realizing now that it would have been cute to actually send, but sometimes he reads my blog, so this digital version will have to suffice. 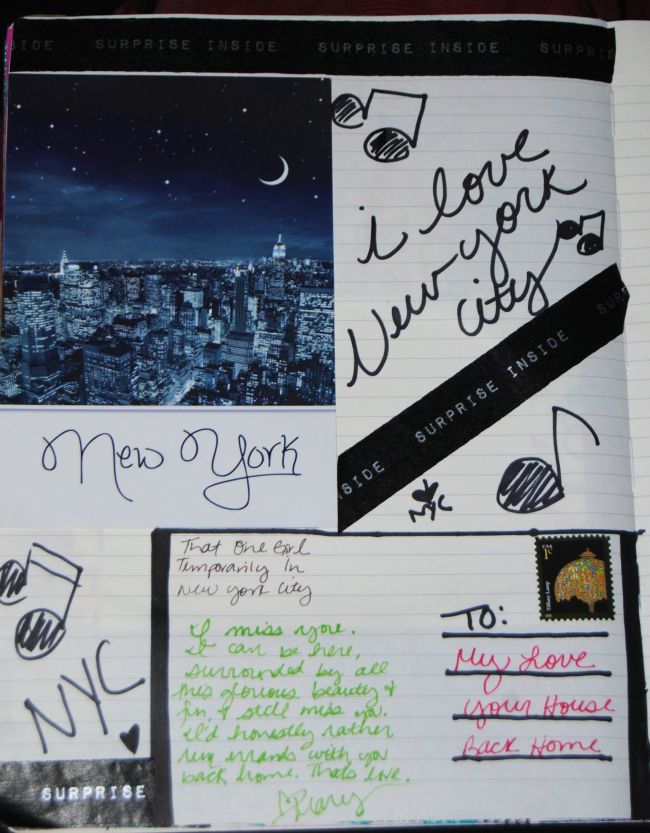 On the right here, I just pasted a photo I found for 69 cents at an antique store on top of some typography themed washi tape. The photo was among thousands of others. Sandwiched between pictures from collections of people who have passed or moved on from the need to keep these tangible snapshots of memories. I bought about a dozen photos, and this one was really aesthetically pleasing. I think I’ll turn the remaining ones into postcards. 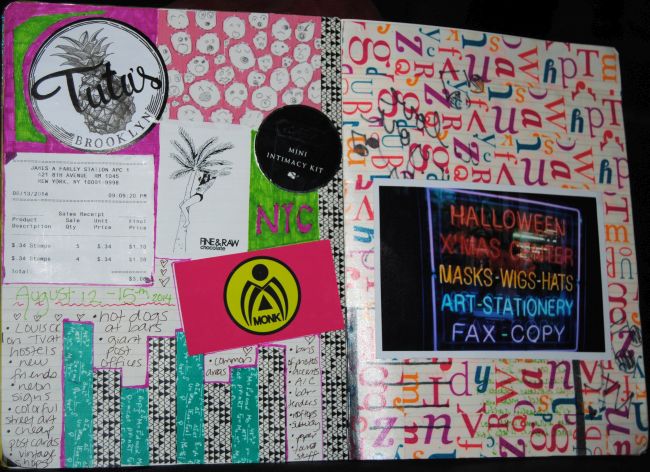 On the left page, I pasted in a bunch of ephemera from my trip so far. A receipt from the giant post office that I mailed things from at 9 pm, a business card from a vintage store I found coral colored jellies at, and a sticker from the restaurant right next to the hostel we’re staying at where we met some great guys who not only gave us recommendations for places to go, but actually showed us around. There’s a sticker from a delicious chocolate shop, the label from a complimentary intimacy kit, and a portion of an ad card I found at a great consignment shop.

Underneath are some written notes from our trip so far, scattered between mismatched washi tape, that I originally intended to look like buildings in a skyline. 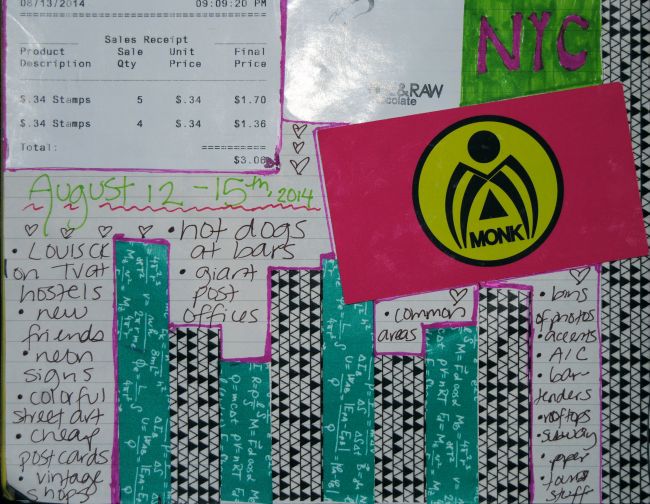 So yeah, this week was a bit different, but I hope you enjoyed it. I will obviously update you on the rest of my vacation to New York soon, but this will have to do for now. Be sure to check out the rest of the ladies’ pages.

Get Messy is an art journal challenge where a gang of crafty vixens are sharing art journal pages we have created to practise our skills and push past our creative limits with hopes to inspire. We share our pages without restraint every week, and once a month we create around a prompt. Go check out these crazy talented ladies who each have a unique perspective and style. We will be sharing our work around social media so follow the hashtag #getmessyartjournal
in Art Journal 14 Aug 201414 Aug 2014 6 comments
Share
Post tagsget messynew york