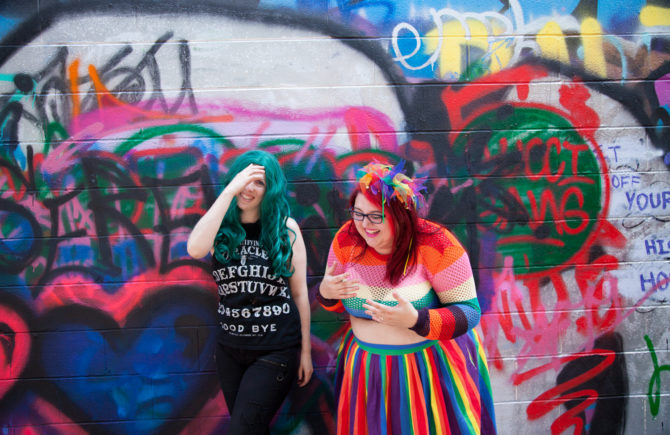 Fuck Small Talk: 50 Things To Talk About Instead Of The Weather

When Joe and I first started texting, he said, “Ah, I’m not good at this small talk stuff”. So I said, “Okay, fuck small talk. Let’s big talk instead”. He asked, “What’s big talk?” and I answered with a list of things about me that are real, true, interesting, raw, and not things you would find in a MySpace survey circa 2004. I’ve seen people mentioning similar annoyances lately on social media, that being they’re “over small talk”, so I figured why not create a resource of things to talk about that aren’t just “Hey! It’s a hot one out there today, huh?” because that can make even the kindest person feel violent over a period of time.

Let’s talk about the stuff that turned you into yourself. The nitty gritty. The ugly shit. The things that you were told to save till the tenth date or to never reveal at all. Let’s share who we are with people and if they can’t handle it, they can leave. Let’s stop apologizing for the experiences we’ve said yes to, the ones we haven’t said yes to yet, or the ones that have happened to us without our permission. We are a whole person, and I don’t know about you, but if I’m going to get along with you and spend time with you, I want to know about the stuff I wrote about on this list… not talk about the weather (or how the weather used to be). 50 Things To Talk About Instead Of The Weather

1. Are you friends with any of your exes?
2. What do you want done with your body when you die?
3. Are/were you closer to your mom or dad?
4. What was the most rebellious thing you did as a teenager (just for the sake of rebellion)?
5. Have you ever had a same-sex experience (or opposite-sex experience)?
6. What’s the last food you binge-ate?
7. Have you ever run from the cops?
8. Would you ever fuck around with time travel if given the opportunity?
9. What’s the worst part of America?
10. Have you ever been cheated on?/Could you ever forgive someone for cheating?
11. What’s the most shallow thing about you when it comes to being attracted to someone?
12. Do you think you’d make a good parent?/Do you want kids?
13. What’s the most generic/trashiest book or band you really enjoy but don’t publicize?
14. What is your opinion on homeschooling?
15. If you were going to redo everything and go to college for the first time or had to choose a different major, what would you choose?
16. What’s something that used to be on your bucket list but now you never want to do and vice versa?
17. Have you ever taken any illicit drugs? Which ones?
18. Would you rather get paid every day you work based on tips or the same amount every two weeks?
19. What was the most disappointing birthday you’ve had?
20. What did your past relationship teach you?
21. Do you want to live past 80?/What age do you want to live to ideally?
22. What kind of old person do you want to be?
23. What’s the most dangerous thing you’ve ever done that you’re surprised you’re still alive after doing?
24. If you could snap your fingers and be pretty great at one talent, what would it be?
25. What holiday do you wish could be eliminated? 26. What’s the least attractive (non-physical) quality someone can have?
27. What’s the worst first date you’ve ever had? (Was it your fault?)
28. What’s your love language?
29. What’s something that you genuinely don’t know anything about but are too embarrassed to ask about at this point?
30. Explain each of your break-ups in one sentence.
31. How many funerals have you been to?
32. What trend do you wish would make a comeback?
33. What’s something you would make a sign for, go out, and actually protest for/against?
34. Have you ever been in a fist fight?
35. What are your feelings with how fast technology has advanced in the last thirty years?
36. What’s a weird tradition your family had growing up (that you didn’t know was weird till later)?
37. What’s the coolest thing about the city you live in?
38. Was your childhood trauma-free?
39. What’s the first thing you do when you get home?
40. When’s the last time you cried because of a song? (What song was it?)
41. Do you have any regrets?/What is the biggest one?
42. Do you read for pleasure? Fiction/non-fiction or both?
43. What’s your biggest fear about living/moving in with someone?
44. What’s something people always say when they introduce you to their friends? (But maybe you aren’t all that jazzed that they do.)
45. What movie did you watch the most when you were a child?
46. Who was the first celebrity you were sexually attracted to?
47. What game show do you think you would kick ass at?
48. What celebrity do you wish wasn’t famous?
49. What’s something that nine times out of ten will put you in a better mood?
50. What’s your life philosophy?

What do you think? Is it just me? Or are you over small talk too?

If you want to know more Big Talk about me, check out this video where I reveal 50 random facts about me!