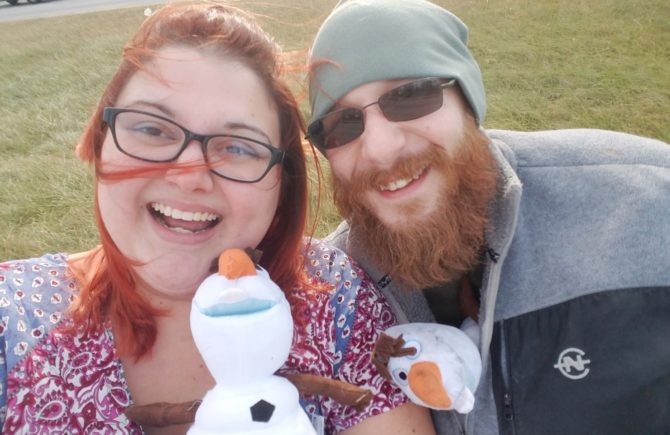 Today I was driving to my friend, Laura’s, house and I took a different route. All of a sudden I saw a bunch of white things in the middle of the road and realized they were a bunch of plushie snowmen from the movie Frozen. I started laughing a lot, and decided I couldn’t just Let It Go… so I turned around and circled back on 32 West. I pulled over on the shoulder, waited for a moment to run across the highway, and as I got to the median I met a guy named Jessie who was ssllowly picking up snowmen as well. I asked him if the plushies were his and he said no. We laughed about the fact we didn’t have any kids and how crazy this all was. He continued to stuff Olafs into his hoodie as I threw them into my blue bag. We took a selfie together, to immortalize the moment and total bizarreness neither of us could pass up and went our separate ways. It was one of those moments where I felt totally and completely alive and the universe is weird and amazing. I don’t know what I’m going to do with all these snowmen, but if you want a part of the magic I’m happy to send you one if you pay for shipping! Just check out below and you’ll get a magic Olaf in the mail in time to celebrate 2017! (Warning – a few of them have little dirt on their butts from being on the ground. I’ll definitely send the most pristine ones to people who check out first!) (Only United States addresses, I’m sorry!)

PS – Speaking of plushies, if you haven’t signed up for the Stuffed Animal Sleepover, now would be a good time to do so!