Don’t Forget To Go Outside

Like many people, I was surprised at how affected I was by Robin Williams’ death. It felt like someone punched me when I found out, and I don’t really react that way to information about celebrities, good or bad. I’m still very sad that he’s no longer with us, but I’m grateful for the discussion that sparked as a result. It seems that it’s finally getting through to some people that depression can affect anyone. It doesn’t matter if you’re rich, famous, hilarious, or hot. It’s an illness. The same as Cancer, Chrone’s, and Cystic Fibrosis.

Something else a lot of people don’t realize is that it’s a consistent battle throughout your lifetime. I’ve been pretty open about my mental health in the past (and I still am; feel free to e-mail me or comment here). I’ve been taking anti-depressants for a decade, although my dosage is much less than it used to be, and they help. They’re not a quick fix by any means, and I want to make it clear that my overall joy is something that I actively work at. Does it get easier to be and stay happy as time goes on? Of course, everything gets easier with practice.

But some days I still wake up sad and hopeless without any reason.

Knowing there’s no reason or basis for my emotions and thoughts doesn’t change how I feel. Knowing yesterday was amazing doesn’t make a difference. In my head, it’s bleak and despondent. All I want to do is stay in bed. And you know what? I do.

I had a day like this recently. I texted Richard and asked if he’d come keep me company. He did his best to cheer me up (which I’m sure was weird for him because this is the first time in four months he’s seen me like this), and it was great to have him here, but the cure didn’t come till later. He was hungry and we left to get food. I offered to drive (something I love to do), and as we were exiting my neighborhood, I pulled my car over, threw it in park, and walked to my trunk without explanation. I was getting a piece of chalk (yes I keep chalk, among other necessary supplies, back there). I ran through the wet grass in my flip flops to the wall I had once drawn a staircase on. And on it I wrote:

“Anything ordinary can be beautiful.” 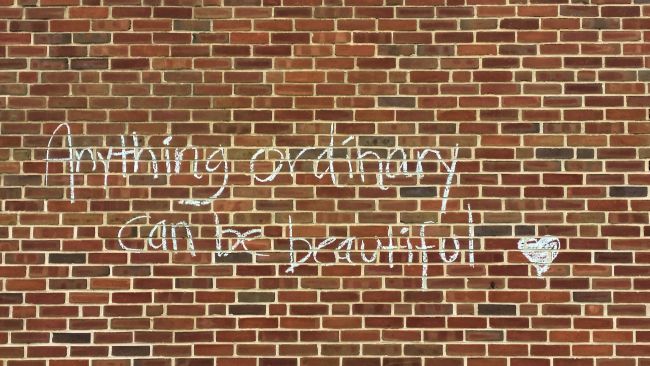 It occurred to me that this brick wall on the side of an elementary school building was just that: a wall. It wasn’t always special, but I had made it that way. I gave that wall meaning, and I was going to do it again. And I can do it with anything in the world. Brick walls, plain rice, and annoying conversations. They all have the potential to be more, I (we) just have to give it permission.

This little field trip for tacos had made me feel better. And you know why? Because I left the house. Getting out of the house almost always makes me feel better. When I said that out loud, Richard said, “So why didn’t you leave the house?!” A super simple question, but one I didn’t have the answer to. The longer I stay inside on the couch, the easier it is for me to remain there. And the truth is, sometimes I cling to the sadness. It’s familiar and infrequent, so it’s easy for me to listen to the voice that tells me it would be stupid to help myself.

Leaving the house isn’t a cure for depression. There isn’t one cure, actually. But the reason that it was so easy for that little thing to break me from my funk is because of the years of effort I’ve put in to develop coping skills that make it easy to bounce back. Four years ago, I would have just let Richard go get himself food and I would have stayed curled up in bed.

One of my top five favorite Humans Of New York portraits is of this 93-year-old woman, named Mary (coincidence?): 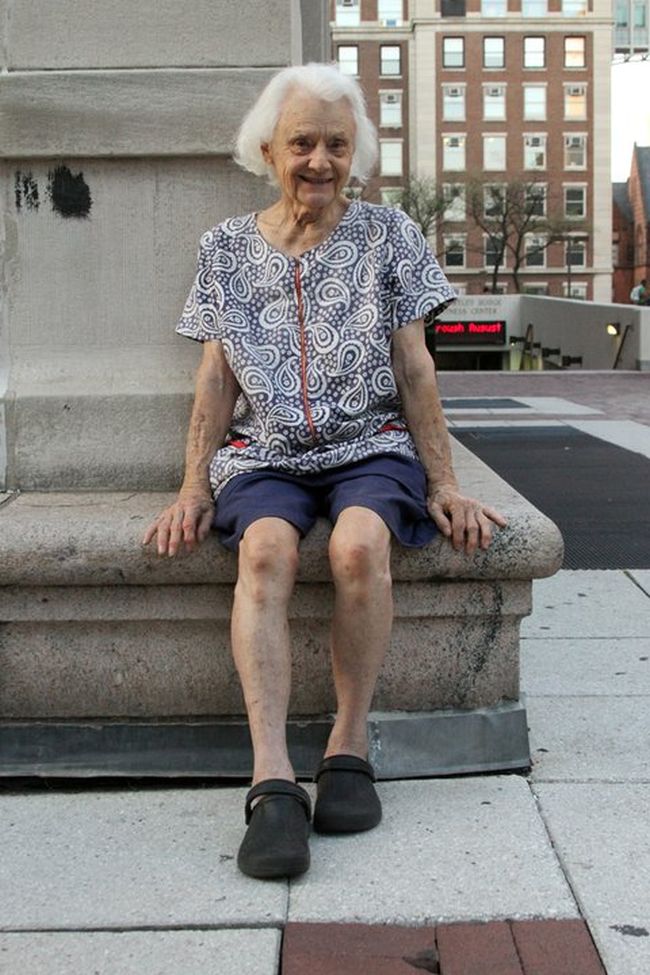 “If you force yourself to go outside, something wonderful always happens!” – Mary

Guess what? She’s right. Go outside and see squirrels playing tag, the occasional speck of glitter in the gutter, and an adult playing in a way that makes you want to join in. Leave the comfort of your home to witness a flash mob, a sidewalk sale full of treasures, and trees bending towards the sunlight. Everything is real, beautiful, and full of magic. Sure, you can stay inside and experience things virtually, but remember that there’s not an app for everything.

If you need extra incentive to get outside, sometimes new clothes can give you a boost! Especially if they’re conducive to moving around comfortably outside! Consider getting yourself a pair of new comfy running pants to run around town in! (Click to read more)