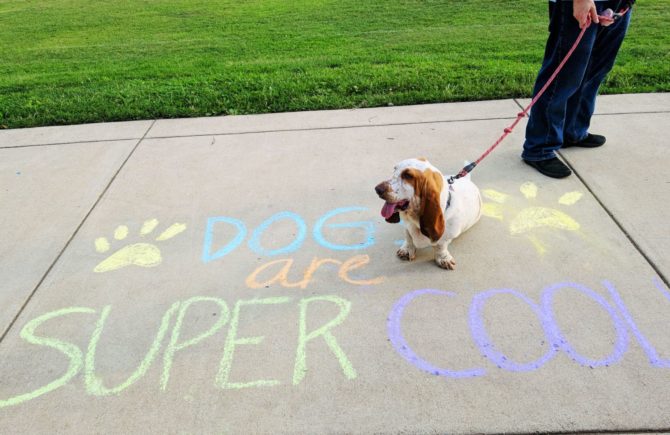 It’s no secret at this point that Joe and I are the crazy couple who loves dogs but don’t have one ourselves. We live across the street from a dog park, own treats, water/food bowls, and awards that say “best pup” and walk around to hand them out to very good boys and girls. We’re not ready to have the responsibility of a dog yet, but we really do love them. We seriously pay admission fees to go to dog festivals and are members of dog groups on Facebook to attend meet-ups. When we’re at the dog park watching them play, people will ask us which one is ours and we just say “Uhhhh” and awkwardly moonwalk away.

We were actually at a pet block party earlier this month, and a couple (who actually owned a dog) asked us where our dog was, and when we told them our deal, the guy totally got it because he did what we did before he had a dog. He called us “Dog Connoisseurs“, and I am holding onto that title until I have one of my own.

Anyway, I decided to do some interactive guerrilla art at the park. When left on its own, it just shows that Dogs Are Super Cool! Which they are, and pretty much everyone in that park is going to agree. But if you stand behind it, like I was, you can catch dogs walking by it, and get their picture as they walk by. It was the perfect puppy photo trap op. Hahahh. We met some very good boys doing it.

I’m not going to tell you about each dog, because I don’t know a lot about them all. Most of them just kept on doing their own thing, but I will tell you about the first one, named Pumpkin. He literally had to stop to lie down every 20 feet. He was after my heart. He laid down in the middle of the sidewalk chalk and then got up and plopped back down again. His dad was like, “Buddy, I have this dream of going home some day“. And you could tell that this was what they go through every single day. I loved it SO MUCH. I loved all the dogs. I love all dogs. Dogs are good. Dogs are better than people. Fight me.

Okay, I give you all the pups! Which dog is your favorite?