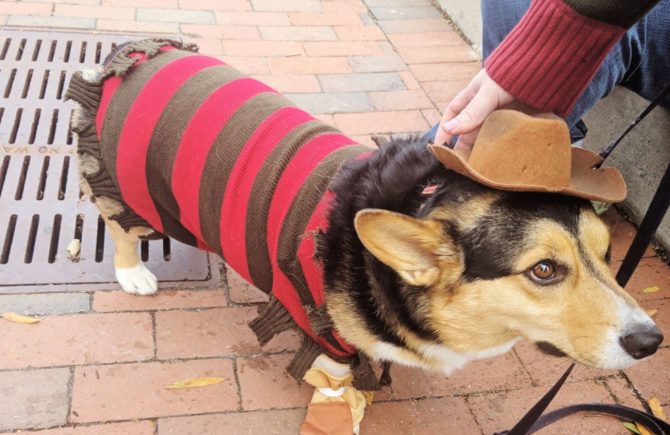 You know something is important if I wake up before 9 AM for it. I was at a Halloween party the night before this event and turned in earlier than I wanted to so I could wake up. Joe literally dragged me out of bed, and I kept angrily and groggily saying, “If there isn’t a Corgi dressed up as a lobster, I’m going to personally kill you“.

I drove us down to downtown Annapolis, and we walked to the dock where we were greeted with the most amount of Corgis I’ve ever seen at once. I’ve had dreams where I’m walking through the woods and I come upon this commune of Corgis or Pugs and they’re just out there living an amazing life and they crawl on top of me and cuddle and lick me and I have the best time of my life. But this was real life. And to top it all off, they were all in costume. Does it get better than that? I have no idea. There were barely any repeat costumes, either! There were quite a few hot dogs, but it wasn’t even weird or annoying. Especially when they all somehow ended up congregating together for a hot dog and taco party. I was super into that. The costumes were hilarious, unique, thought out, and their long little bodies are apparently especially good for costumes. I was literally running from one dog to another. Just yelling and taking pictures and petting tiny little faces and butts. I saw some of the best Corgi butts of all time. Some serious hindparts, I’m telling you. I was in a total state of ecstasy and didn’t even need to finish my energy drink.

I had actually totally forgot about my desire for seeing a lobster Corgi when all of a sudden, it happened. I saw him. I ran to him and got on the ground and hugged him and he was just as I envisioned him: mystical, perfect, soft, and a little absent-minded. It was perfect. I told the Corgi dad how much I wanted to see a lobster and he didn’t really get it, and I strongly regret not asking for a selfie with him (I’m pretty sure his name was Elvis). We got asked a bunch of times where our dogs were or if we had dogs in the show, and not in a curious way, but in a bit of a judgmental way. I thought that was weird. Like, no dude. I came here for the event to admire your beautiful dogs. I will forever be that weird lady. And I’m happy I have a partner who is totally in on being that weird man.

There was a booth of a business who straight up only sells Corgi merchandise called Corgasaur. If you’re into Corgi gear, I recommend checking her out. She was super sweet. The main point, was obviously a costume contest. Apparently in past years, there has been a parade, but I liked the chaotic nature where I could just run around and pet whoever I wanted to. They eventually had everyone line up and parade their pup across the stage. Some of the pup parents were also dressed up, which was really cool. They deliberated and we waited (time for more pets). They gave four awards out for different categories. The dinosaurs won for a category I didn’t hear, the Wizard Of Oz family won for most creative, Freddy Krueger won for most spooky (and I would also like to add for most in character!), and then they announced “And for Cutest Corgi…” and I was like wait that’s rude! But then they picked this like three pound Corgi with angel wings (which I think were real and not a costume) who was the sweetest little baby just getting passed around the whole time, and everyone was like, “Okay, that’s fair”. Adorable.

I think there should have been way more categories because these dogs were all winners. Like Daisy, who can’t walk super far, so her dad carries around an old school carriage for her to ride in! She has her own Facebook page. Go ahead and add her. Let’s just say I will definitely go back next year to what will be the 5th Annual Howl-O-Ween Parade, and I won’t complain about waking up early next time because I know what’s in store. Thanks to the Annapolis Corgi Club for putting this on! (Check them out for more pictures.) And Elvis Lobster, if you’re reading this… I miss you.