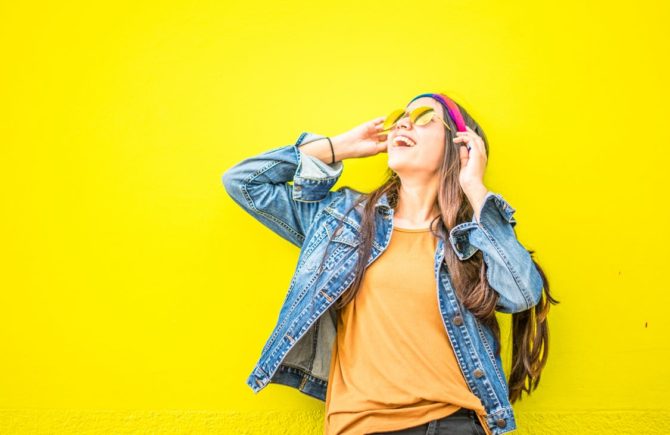 Bringing The Happiness: How To Be The Best You

No-one can say for sure what the meaning of life is, or how best to live it, but in the absence of anything concrete, making sure you’re happy and comfortable doesn’t seem to be the worst idea. While this might seem like an impossible task, it’s not all that difficult: there are science-backed ways to boost your happiness levels, and for everything else, it’s all about knowing yourself. Below, we take a look at how you can be the best version of yourself. There’s no guarantee that everlasting happiness will follow, but you’re much more likely to find contentment than if you took the opposite path. There are plenty of people out there who moan about growing older. Every time their birthday rolls around, they’ll be all glum that their age is ticking upward again. Well, for starters, growing older is most definitely better than the alternative, which is death. But in any case, growing older should be celebrated, because every year you learn more about what you like and dislike. If you know these things about yourself, you’ll find it easier to put yourself in positions that lead to increased happiness levels. For example, if you know you excel in areas with fewer people, you’ll know that a small town would be better for you than a big city.

When we’re young, we always have something to look forward to. We might be going off to college, or starting a new job, or traveling, or just all around trying new things. But slowly, that begins to change. We find a partner, a job that pays the bills, and then suddenly the idea of creating dreams doesn’t seem to be that important. However, no matter what stage of life you’re at, it’s important that you think up something to strive towards. Creating a target gives an incentive to challenge ourselves and bring our best qualities to the fore. If you’re not moving towards something, you’re just standing still.

We said earlier that it’s important to figure out what you like, and build your world around that. However, with that being said, that shouldn’t give a pass to reject anything that’s new and unfamiliar to you. No matter how old you are, it’s always important that you push yourself to try new things. It’s what life is all about! You might find an activity that you enjoy more than anything else. No-one tries enough activities when they’re kids to have a complete understanding of everything they like. Branch out a little! If you’re looking for inspiration, take a look at sites like Meetup or what’s happening in your local area. When something grabs your eye that might be interesting, sign yourself up to try it. If it ends up not being your thing, then no worries – at least you gave it a shot.

Some people compartmentalize their body, as if their body isn’t all interconnected. It is! What’s in your stomach is going to affect what’s going on in your mind. What’s going on in your mind will affect your physical health. If you put good things into your body, you’ll find it much easier to be your brilliant best. Now, of course, sometimes it’s enjoyable to eat foods that you know aren’t entirely good for you. For the most part, however, you’ll want to be filling your plates with those delicious, healthy, and easy to make meals. Give your body what it needs, and it’s not going to let you down.

There are a million and one good reasons to exercise. You’ll have more energy, your physical condition will be improved, and you’ll have a healthier mind, too. It doesn’t really matter what type of exercise you do, so long as you’re getting that heart rate up. Now, getting out of the front door for a spot of exercise isn’t always the easiest thing in the world, especially during the winter, but it’s one of those things that it’s worth powering through for. That thirty-forty-five minutes of exercise will give you a boost that lasts a lot longer than the time you were actually sweating.

While eating well and exercising is going to improve you, they’re not miracle workers. If everything else about your life is damaging, then healthy meals and visiting the gym might stave off the worst of it, but they’re not going to make you the best version of yourself. One area that many people struggle with is their alcohol intake, whether they know it or not (many people qualify as “borderline alcoholic” even if they’re not fully aware of it). If you’re drinking too much, or taking drugs, then look at getting help. You can talk it through with a friend, replace your vices with something more positive, or if you can’t seem to leave it behind, get help from an organization like Silvermist Recovery. Many people who give up their vices go on to greatly improve their lives, in all areas.

We are often told that happiness comes the accumulating wealth and possessions, or by winning social approval through our jobs and achievements. While this is commonly repeated, there’s not much basis in truth. Indeed, researchers have found that happiness related to the amount of money you have begins to plateau once you’re earning $75,000 a year. One area that has been shown to boost happiness levels is the act of helping others. It brings happiness to your life, increases your confidence, and sets an example to other people around you. It doesn’t even matter what you do, so long as you’re doing it regularly. So if you have some free time and you’re not currently volunteering, look at working with an organization whose work you believe in, and get involved. It is often said that “comparison is the thief of joy,” and it’s hard to disagree with that. You could be having an enjoyable day, but one late night scroll through Instagram can have you feeling down. Whether you like or not, you’ll have compared your day with the highlight reel of other people, and likely come away feeling just a little bit negative. There’s one easy way to get around this, however, and that’s to avoid social media altogether. If you think deleting your accounts is too big a step to take, then look at taking a break just for two weeks. Make a note of how you feel during these two weeks – it’s likely that you’ll have seen that you’re feeling happier and more secure in what you’re doing.

Be Comfortable In Your Skin

Advertisements have a lot to answer for. For decades, they’ve been bombarding us with images of people who look perfect, sometimes unrealistically perfect, as in the case of photoshopped images. This has lead to far too many people having a less than content feeling when it comes to their looks. It’s important, always, to remember that A. looks aren’t all that important and B. you’re probably wrong about what you see when you look in the mirror. Everyone looks less than perfect when put under a microscope. Go easy on yourself, and celebrate your uniqueness.

There’s nothing better than making positive changes to your life, and then beginning to feel the effects. It’s important to remember, however, that it’s not going to be a solid upward curve towards everlasting happiness. From nowhere, you’ll be hit by days that suck, or when you feel self-conscious, or whatever. When these days arrive, many people slip right back into the damaging behavior that made that lack confidence in the first place. Avoid that temptation! You’ll regret it if you slip up. Power through those low moments, and soon you’ll be back to feeling on top of the world.

Sunny Side Of Life

You’re not going to get very far with a negative mindset. You’ll be making your world too small, and won’t believe in all the possibilities that life brings. So if you’re going to do anything, make sure you’re viewing the world through a positive mindset. On most days, you’ll be able to will yourself into looking on the bright side of life. The world is going to look much rosier if you’re focusing on the beautiful things in life rather than the small amounts of trash that you walk past.

It’s always a good idea not to dig yourself too deep into a hole. While it’s good to know what you like, and to build something, sometimes we can take it too far. Try to live as free as you can for as long as possible! The more options you have in life, the better you’re going to feel.

Finally, remember to enjoy life! A good meal, laughing with friends, your favorite song…all of these things make life worth living. Appreciate them, and you’ll know how to live well.