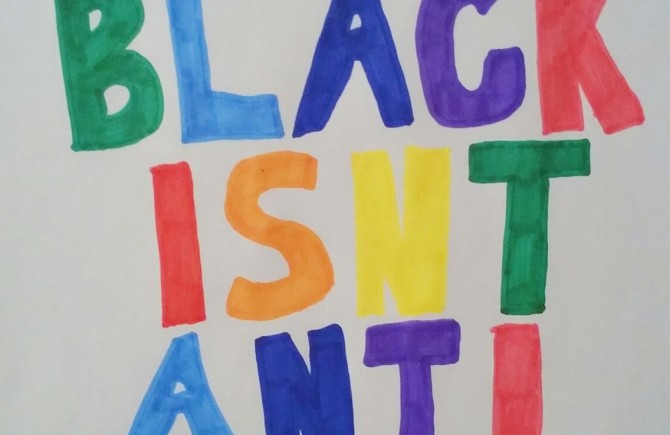 Last April, Baltimore was overcome with emotion that spilled over into protests, riots, and extreme behavior. As much as I hated the violence and destruction accompanied by the riots, I fully understood the emotion behind it. People were angry and they needed to be angry. Too many people actually believe the sarcastic line Tina Fey said, “…The Civil Rights Movement totally worked and now everything is fine”, which causes minorities to feel very real rage and injustice because everything is not fine.

Beyoncé recently released a music video called “Formation” before the Super Bowl. Over a hundred million people’s eyes were on the TV as she created a visual and auditory experience that represented (her) black culture. The song’s contents not only call out things like police brutality and injustice against black people, but it gracefully celebrated things black people are influenced to feel shame over like specific parts of their natural appearance.

Gala Darling wrote the best article of her career which addresses the fact that while she, as a white woman, can absolutely love and appreciate the song “Formation”, it’s not for her. She doesn’t mean “it’s not for me” the way I say “mint toothpaste isn’t for me”, she means this song– this anthem — wasn’t written for her. It was written for all the black girls who have been told they need to relax their hair to be beautiful or feel ashamed of their facial features. It was written for anyone who has been shown that being white is better.

I say “shown” because very few people will come out and say “white is better!”, but the evidence is damning which is why people started boycotting awards shows like The Oscars which are essentially just white people giving other white people awards. (That said, the SNL skit “Beyoncé Turned Black” is a hilarious commentary on how white people don’t understand when things aren’t for them.)

I started seeing some of my friends complaining about the racist backlash to Beyoncé’s video. I was totally taken aback because I guess I’ve hidden or deleted all the terribly racist people on my Facebook feed and I was only seeing people praise the fuck out of B for her making such a bold statement with her music video. It turns out people are saying things like Beyoncé’s music video is “unapologetically black” and “racist against white people”. That made my jaw drop.

Unapologetically black? That insinuates someone would ever feel the need to apologize for being black. Should anyone apologize for being white or any other race? Hell no. You should never have to apologize for the color of your skin or where your great grandparents were from. Racist against white people? How is celebrating one culture automatically a racist attack on another? Do you think a Chinese New Year parade is a racist attack against White American Catholics? (If you do, you’re an idiot.) I’d like to switch gears for a second and talk about feminism. The concept of feminism simply means you think men and women should have equal rights and be treated the same. It doesn’t mean women hate men, it’s just that they want the same rights as them. Are there people who hate men? Yup. That’s called misandry and I don’t approve of it (and it’s separate from feminism). Are there white people who hate black people? Yup. That’s called racism and I don’t approve of that either. Hating a group of people based on an umbrella qualification like gender, race, or sexual orientation is a disgusting hatred, prejudice, and discrimination that makes so many people’s lives a living hell. Feminism is generally less controversial as a construct, which is why I’m using it as a comparison to Black Lives Matter. If you can wrap your head around the fact that being a feminist doesn’t mean you wish ill will towards men, you should be able to wrap your head around the fact that supporting the Black Lives Matter movement doesn’t mean you are giving the middle finger to all other races.

I support Beyoncé and the fact that she’s using her uber platform to spread an important message. I support feminism. I support Black Lives Matter. I support non-violence, acceptance, and equality. I support men. I support white people. I support all lives, because supporting one thing doesn’t mean you’re automatically unsupporting another. These things aren’t mutually exclusive, life isn’t black and white. Pun intended. So celebrate and love yourself while simultaneously celebrating, encouraging, and supporting others. Fight for equality across the board and show love for everyone because we’re all just people sharing a home on this planet.