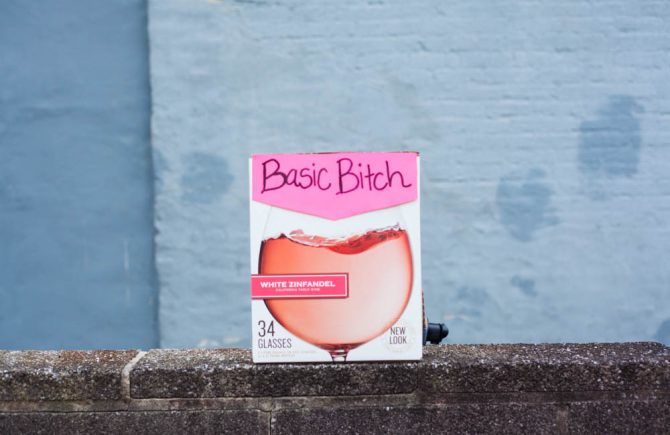 One day, I went over my friend’s house and he paused what he was watching, rewound it, and told me to watch the song that just played. It was on the show “The Characters” on Netflix, during Natasha Rothwell’s episode, and the song that he wanted me to watch was called “Basic Bitch”. After it played and I wiped my laughter tears off my face, he looked at me like, “…so…. how many of those things are you?” And that made me laugh even more. Since then, I’ve shown that video to anyone who would watch it. The term “Basic Bitch” has become really common in the past couple years. It’s generally used to describe someone who is vanilla and unoriginal while claiming to be super interesting and awesome. I didn’t really know about the term until my ex started calling me “Acidic” and I finally asked what he meant by that (the answer was just that I was super weird and the opposite of “basic”). I’ve never thought of myself as basic because until this video I thought the term was synonymous with “boring”, and my greatest fear is being boring. But this video made me realize that we’re just starting to call anything and everything basic, and maybe we’re all basic in our own way.

I think it’s an interesting topic. The video made me laugh at first because of how many of the things on the list she rattles off I could say “I do that” to. Do I think I’m basic? No. But so what if I am? If liking the things I like and doing the things I do make me “basic”, then so be it. Never let anyone tell you what makes you happy is boring or stupid. You’re allowed to like what you like without having to feel like explaining it.

That said, just for fun, I thought it would be fun to come up with a Basic Bitch Quiz or Basic Bitch Checklist using the qualifiers they give in the Natasha Rothwell video, which you can watch above. You can download the quiz below. I also took the time to write out the lyrics to the song for you in case you feel like you need that.

There are 36 Basic Bitch Points possible. When I took the quiz I got 16/36. I don’t know what that means, but I would love to know what you got! After you take the quiz, share your number in the comments and we can talk and laugh about how ridiculous is it. 🙂

Without knowing anything about this, here is the scale I’ve created to “judge” your scores. 🙂 Remember, this is all in good fun.

0-6 Acidic As Fuck! You’re not basic at all!
7-13 Low Level Basic! You have some basic tendencies, but you’re not full-blown (yet)!
14-22 Pretty Basic! You’ve got a good amount of basic in you; you’re just the right amount of Basic Bitch!
23-30 Big Basic! You’re killing it with that basic lifestyle, and we’re loving it!
30-36 BASIC Bitch! You take this video as gospel and you’re proud of it!