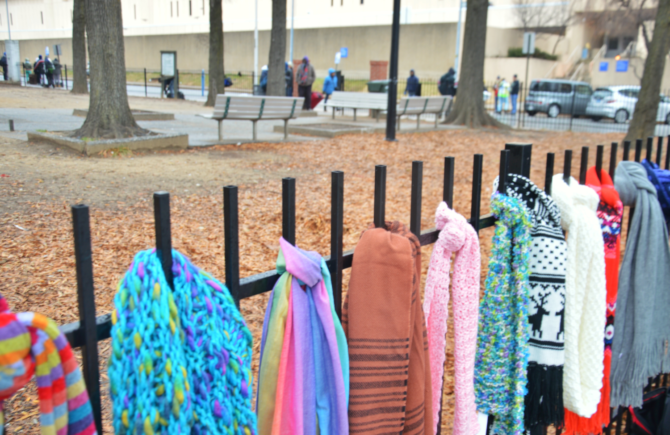 A Facebook friend posted an article on my wall of someone who organized a scarf abandonment project on the west coast and suggested I organize one in Baltimore. You don’t have to tell me twice! I immediately put up a Facebook event page and called for scarves from all over the country. I was so thrilled with the results. People really stepped up. They made scarves with their hands, they got their friends and churches involved, they donated scarves from their own collections, they even bought some with their own money. People were able to mail scarves to my PO Box or drop them off in person. After everything was said and done, we had about 150 scarves to donate to the homeless in Baltimore. The location of the scarf abandonment was at the park next to the Phoenix Shot Tower at the intersection of Fayette and President Streets. There’s a large population of homeless people who congregate there on a regular basis as well as a fence, so I thought it was the perfect location. Our plan was just to tie the scarves to the fence and allow anyone who needed a scarf to take a scarf. I even put up some signs that said “Need a scarf? Take a scarf.” Turns out, we didn’t really need those signs. As soon as I got out of the car, half a dozen people bombarded my car and demanded to know what I had. They asked me to hand “it” over, they asked if it was washcloths, they asked “why it wasn’t” washcloths. I simply asked for a few minutes to get the scarves on the fence so they could be laid out and we could snap a couple photos and then they could have whatever they wanted, and that was unfortunately definitely not something that was easily listened to. When Liz got there with a bag of about fifty scarves, someone took the bag from her and then continued to grab scarves from the fence saying he “only liked silk”. The thing is, when you do something like this it’s easy to feel disheartened and unappreciated. But I always have to remind myself that guerrilla art of any kind, and especially random acts of kindness like this, are gifts to the world. And when you give a gift you can’t expect anything in return. Even a “thank you” or the kind of interaction you would appreciate.

Our goal was to make people warm, and with 150 scarves, I think we can easily say we accomplished that goal. All the scarves were snatched up within 20 minutes. It was crazy! They will definitely be keeping people in Charm City stylish and warm this winter. And for those of you who have already been asking, yes this will be a new annual tradition! Unfortunately, due to how quickly people were taking the scarves, I didn’t get a chance to get a long shot of everything tied up at once. But I did get some video that gives you an idea of the spread. You can check it out to see more of the location and get a feel of what it was like. And you can get a closer look at the tags we tied onto every single scarf that went out — they had messages on them that said things like “You are loved; Stay warm!”