Back To School Care Package 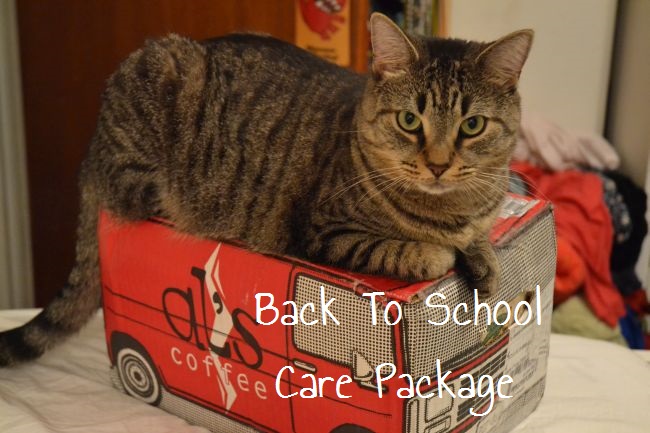 Recently, someone I know started at a school he has to commute an hour to each way. I wanted to make his life as easy as possible, so I decided to make him a care package. He liked it a lot, and it occurred to me that someone else might want to make a similar gift for a loved one. So today I’m going to share some ideas of things to put in a back to school care package.

Long commute or not, it’s safe to assume there’s at least a little traveling involved to get to school. I burned two mix CDs and two comedy albums that I put into a mini carrying case

. I tried to make one of the mixes more upbeat to get him pumped up on the way to school and something more chill to mellow him out on the way home. I also included a note that says that every month I will give him at least two new CDs, so he doesn’t get bored with his options.

CDs are obviously just one option. You can easily make playlists on Spotify, or just directly upload it to their iTunes. You might consider recording your own voice for a greeting or closing out message.

As my friend put it, “When you’re busy with no breaks, everything becomes about food”. Back to back classes an hour away from home in the middle of the day will make it difficult to eat a delicious lunch. Think about foods that are easily packaged like candy, jerky, and nuts. (I included little zip lock baggies for him to have the option of making smaller portions for the day.)

People in college tend to run on empty a lot, so think about caffeine! I included a 5 Hour Energy shot, a case of Red Bull, and a travel mug

in his favorite color.

I also got him a gift card to his favorite fast food restaurant so he could get breakfast in a hurry on his way in.

In addition to music, make the car ride more enjoyable. I threw in some air fresheners

in his favorite scent and a container of gum specifically designed for cup holders. You can also consider things like car chargers, decorations, and emergency supplies.

And if their mode of transportation isn’t in a car, think about things that would make their subway or bus ride more enjoyable, like new ear buds

or a good book.

I also included a gift card for gas once I figured out what gas station he stops at on his route.

They’re going to school, right? What a great excuse to go crazy in the stationery aisle at Target. Spiral notebooks, Sharpies

? They probably need it!

School is hard and commuting sucks. Those are the facts. Since this is literally the most practical gift I’ve ever put together, I decided I had to add a little element of fun! I got him tickets to see one of his favorite bands about halfway through the semester. It’s not just going to be a good stress reliever to dance to some ska on a weekend in October, but it’s something to look forward to.

This category could include anything, though. It doesn’t have to be tickets to an event. It could be a fun new T-shirt, video game, or gift card to a store they could just enjoy buying superfluous stuff at.

Be sure to include an encouraging note with your love and support, and wrap things up nicely! You could do a basket presentation, or simply load everything up in a patterned gift bag. Just don’t just hand them over in the department store bag you purchased them in. Put some thought into it!

Other things to think about including are things to use in a dorm room or apartment, some school spirit paraphernalia (like a bumper sticker or hoodie with the mascot on it), or taking care of an expense they were expecting to take on (parking pass, a textbook).

Do you have any more ideas of things that you would want included in a care package for you?